Motorcycles, speed, petrol, traffic signals, drifts, drags and what not! I have tried and tasted all these tantalizing stuff in my life except that one thing. The same thing which I have been watching for more than a decade. The same thing that excites me, that drives me crazy and that spoils my annual exams every single time! 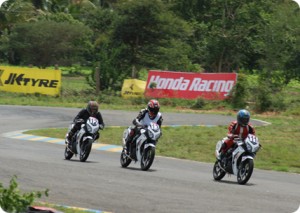 Well, enough of boasting about the “same thing”. It is racing pure unadulterated racing. I have been following F1 since 1999. I have been visiting the Madras race track quite regularly since 1996. But one damn thing that never lets me live my dream, my deepest desire to race – the age.

Thanks to the strict regulations and a partially orthodox family, I never got an opportunity to race till I got my road driving license. But thats the end of the saturnine part. Precisely speaking, July 2010 was the month when I got my license. And almost instantaneously, I started the exhaustive search to race – to wring the throttle and to get the hell out of that puny engine.

Honda gave me a way out! A real life racing experience for a paltry fee. Its even cheaper than the cheapest Fastrack watch. (The fast of the fastrack ends with the name!) I had to wait for the semester to end because of my father’s fear for safety. With a completely messed up IE exam, the 5th semester ended. One of the worst sems I have ever had at IIT partly because of the infinite+1 things I did during that sem. Now, lets get back onto the track quite literally!

The day was December 3, 2010. The race was scheduled at 8AM. It was called the “Honda One Make” race. I was going to race the 110cc Honda Twister in the Novice category. I was skeptical about the fun part as the bike is a highly underpowered machine with a top speed of a meagre 96kmph. But the scenario was completely different once I took the bike from the pits. I was like a fire-fighter with an armor worth mentioning. It was a complete protective suit with all kinds of nice materials and the looks of a stunner. 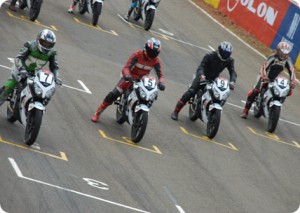 With more than 10kgs added to my body, I was weighing close to the bike’s weight! And then the start. Since we were all novices, there is no “Lights off, vroom off the line” start and we had to start from the pits one after the other. Since I thought it will be a good idea to set the pace early, I rushed to the second spot at the pit entrance and got into the track in the second position.

And that was it! A new world. A world with no speed limits. A world with no fear. A world to live your dream. With my heart pumping harder than it ever pumped, I opened the throttle with the hurry of a 5 year old opening a chocolate cover. Though it was nothing more than a moderate acceleration, it was awesome.

A feeling of its own. Soon, I overtook the slow sober guy at the front. And the track was mine. With no hint of fear, I set times – fast lap times. If it was the long straights which I loved riding in my venerable Yezdi, it was the corners and the sweeping chicanes that impressed me a lot on the Twister.

Steering a 100kg beast around the corners at speeds close to 100 was no mean task. I tilted, slanted and did everything I can like a Rossi or a Stoner on their supremely powerful 800s. Though I couldn’t put my leg down to the tarmac, I did a good job by creating uniformly ugly scratches to both sides of the bike.

Afterall, we, Indians, always like to make full use of every penny we spend right? I had 20 minutes to prove my mettle and get into the top 15 out of the 60 who will qualify for the ultimate showdown on Sunday. Once the 20 min condition got into my mind, I pushed the vehicle so much, so hard that I ran out of the tarmac straight into the 5 feet high grass enough to cover the whole bike.

That was an another instance of my ruthless riding – You can never turn a Twister at 100kmph at that corner. I cursed myself but there was no time to throw maledictions at myself. I got back onto the track. But those valuable 2 minutes lost meant I’m now right in the middle of the traffic – In the midst of equally capable and equally fearless riders.

The calm, serene and clear atmosphere I had earlier was gone. I had to either tow behind a more experienced rider or see the craziest of the accidents with the riders running off the track quite consistently. I told myself, “Come on! You can’t expect a Rossi-Gibernau tussle in a Novice category race!”.

While all this was happening, I was overtaken by a tall lad who was text-book like in his riding manners pointing his legs and the bike in the right direction at every single corner. He was a class apart – a class of his own. He eventually went on to win the race and the final showdown too! But that inspired me to give it my all.

I tried getting my foot down. I could but not too low to touch the tarmac. My boots were brushing the ground, sparks were flying all around. But my knee was still quite far off from the ground. The rest of the 8 minutes, I was left with, was spent the same damn way – me trying to get that knee touch the ground at every single corner, every single second.

But I just couldn’t do it. Finally the race/test-trial ended. I told myself, “May be I should join a proper racing school or do some proper ground work on the techniques.” I consoled myself saying, “I am going to hit the gym, get my techniques right and come back strong, hard and ruthless as ever the next time.”

On the whole, it was an experience which cannot be expressed in words. Call it orgasmic or anything. It was simply unmatchable, unforgettable and once in a life-time. I will never forget that day, that twister which was screaming like a muted lion crying for some mercy all through those 20mins, that MMST race track and the most important of them all – My father.

While all this was happening, he was playing the role of a commentator speaking over the phone with my mom and my grandfather assuring them of my safety, informing about my position in every single lap. And those occasional cheers too! Without him, I would have been nuts.

I would have been a nerd with no knowledge about the most precious things in my life – the motorcycles. If he would have not taken me to watch those weekend races, I would have been like any other teenager with a careless life racing in the streets in some of those crappy conditions. After the race, he was overwhelmed with my efforts which was not an herculean task by any means.