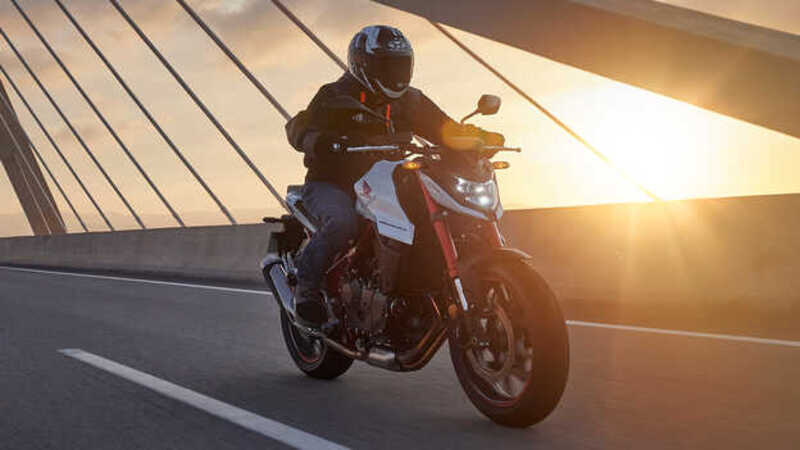 After a long bout of teasers and leaks, Honda have unveiled the all-new ‘CB750 Hornet’ globally in a very aggressive & sharp-looking avatar.

The 2023 CB750 Hornet is a successor to the Honda CB650R naked, which has garnered it own following in all these years. The overall look & design of the new naked is inspired by its sibling Honda CB500F.

The biggest USP of the new Honda CB750 Hornet is the addition of the latest electronic suit which is a very rare offering in the middleweight segment. The only other motorcycle in this segment that comes close to it in terms of tech & riding aids is the Triumph Trident 660, which in itself is significantly more expensive than the Hornet.

Powering the 2023 Honda CB750 Hornet is a new liquid-cooled, 755 cc, parallel-twin engine that boasts 92 HP at 9,500 RPM and 74.4 Nm at 7,000 RPM. This engine, like its rival, utilises a 270-degree firing order in order to mimic the sound a V-twin motor makes. This motor puts down its power through a 6-speed transmission system aided by a Slip & Assist clutch. Honda is also offering a bi-directional Quickshifter as an option.

The feature list on the new Hornet is on-par with its rivals.  It is equipped with full-LED lighting, Bluetooth-enabled 5” colour TFT display, Traction Control system, 3-ride modes – Sport, Standard & Rain, 3-level Wheelie Control, and ABS tech as standard. Also equipped on the bike is Honda’s Smartphone Voice Control system (HSVCs) which allows the rider to speak certain commands to the bike.

The Suspension setup on the new CB750 Hornet consists 41 mm, Showa Separate Function Forks (SFF) at the front combined with a Pro-Link rear monoshock. The Braking of the bike is handled by twin-discs at the front and a single rotor at the back.

In the U.K., the CB750 Hornet is priced starting at £6,999 (approximately Rs 6.5 lakh), undercutting the segment rivals Yamaha MT-07 & Triumph Trident 660. This pricing also keeps the Hornet cheaper than its sibling – Honda CB650R.

As of now, there is no information regarding the new Honda CB750 Hornet making its debut in India anytime soon. Considering Honda’s aggression and the fact that we already have the CB650R, we do expect the new Hornet to make its way here but when? We do not have any clear answer.