Honda has launched two super bikes just like Suzuki and Yamaha. Here is the details for both the bikes… 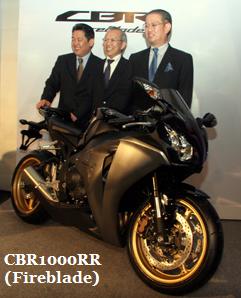 Honda CBR1000RR: CBR1000RR popularly known as Fire blade will spearhead Honda in the premium bike segment which is currently dominated by Yamaha R1. Developed by the same team that was behind the Honda RC211V race bike for the MotoGP series. The CBR1000RR is powered by a 999 cc inline-four engine with a red line of 13,000 rpm. The engine features titanium valves and pumps out 178 hp of peak power. Honda’s latest CBR1000RR sports first-ever ABS system on a production super sport machine..

Honda CB1000R: This naked bike from Honda which will be pitted against Yamaha’s MT-01 that sees a 1000cc Fireblade engine re-tuned for mid-range performance and dropped into a naked frame. Specs include fully-adjustable forks and radial front brakes taken from the Fireblade, all-new single backbone frame, single sided swingarm, a superb looking 4-swept-spoke ninja-star rear wheel, an all-digital dash and and H.I.S.S. security system.

Honda will sell the CBR 1000RR and CB1000R through exclusive stores in four metros – Mumbai,Delhi,Chennai and Calcutta in the first phase. Later it will be expanded to other main cities as well depending on the demand.