Buying a bike for us guys is similar to what wedding shopping is for girls. We search for every possible option, weigh all the alternatives, read endless reviews, ask out our friends, take few test drives and even when we’ve decided upon what we want, we search for the dealer giving us the best possible deal. In short we spend the whole day with the image of ourself driving full throttle on a broad empty highway. 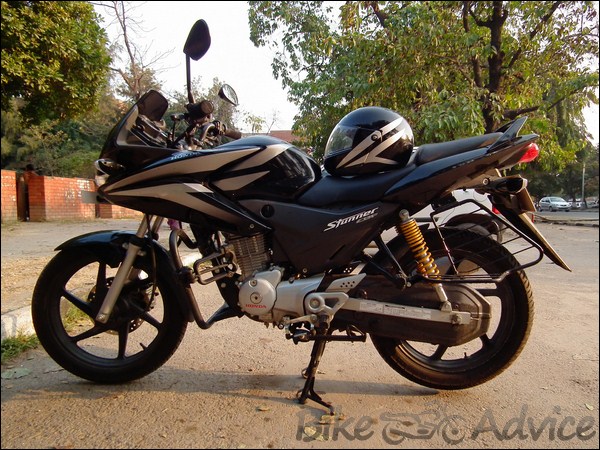 And boy I was no different. Hi guys, my name is Suveer Malhotra. I own a generation one Honda Stunner CBF. I bought it one and a half year back. I have done around 8500 kms on it and its been a perfect love story. Well almost. So now let me get to the point quickly.

It was the start of 2009 and my parents had promised to buy my a much awaited bike on my birthday which comes in july. So I had plenty of time to do a thesis on the Indian bike sector and come up with a bike for me. Starting off my parents had given me a budget of 50k so it restricted my options a bit but I was hopeful to push them upto 60k. Now I started my search with the obvious pulsar range. I was quite in love with their styling esp after they introduced digital console and led taillamps. I particularly liked the Pulsar 200.

But I was way too outta my budget and considering the fuel inflation nowdays I decided to let this one go. Meanwhile when I was going through the other options , a friend of mine came by one day. He had bought a red new Stunner cbf. That was the first day I put my eyes on this newly launched machine.( Spotting a Stunner was quite rare those days). I wasn’t actually a fan of the the red color but there was something striking about its looks. I immediately asked for a ride and in a matter of seconds I was in love with the ride quality of the Stunner. 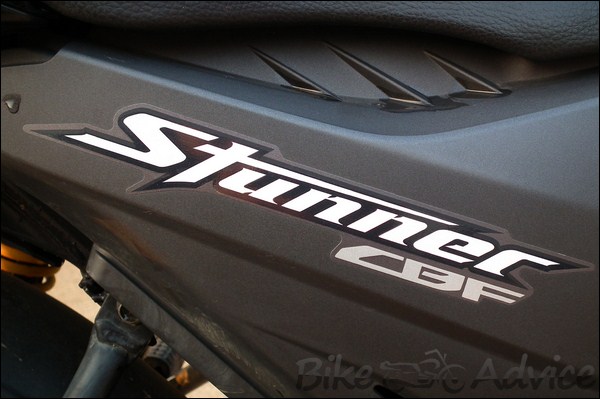 The smoothness with which it drove is still fresh in my mind. It felt so light and went around the corners effortlessly. I got down after a short round and proceeded with the obvious question.. how much did you pay for it. And he said 52k, which was way below from what I expected. I even asked the same question again to confirm the price. It didn’t look its price and definitely didn’t look like a 125cc bike. Then after much hustle hassles I ended up buying a black Stunner cbf in july 2009 and its been a perfect a perfect mate to me since!

Well undoubtably the major selling point of this bike, Honda Stunner CBF, is its looks. It definitely doesn’t look like a 125cc bike. I’m yet to meet a person ( including girls) who isn’t in love with the Stunner’s looks. I adore the front fairing, it gives it a big bike feel and is a complete segment shifter. Now i’ve had ppl coming and telling me that the fairing will break etc etc . Let me put your doubts to rest. Firstly the fairing is quite solidly built and even if the need to change it arises, it costs rs. 900 per pair. Yes 900 bucks for a new fairing, now thats not too much. 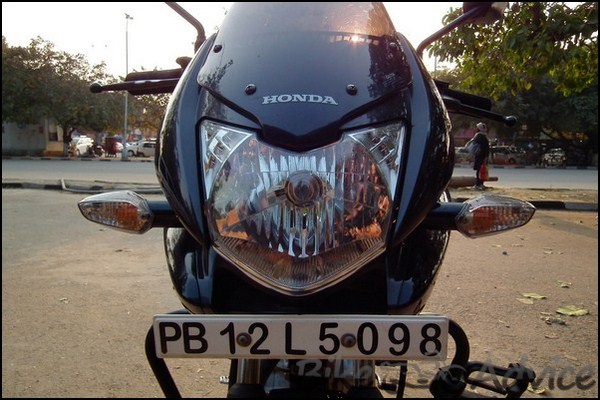 And I believe changing your fairing is certainly better than a dented fuel tank. The body graphics on the Honda Stunner CBF are quite appealing with prominent Honda wings logo. The taillights are distinctively designed and have a sharp high rise styling. Again if you’re crazy about led taillights, you need to look at other options. The turn indicators on both the front and back are wonderfully designed with a edgy design. 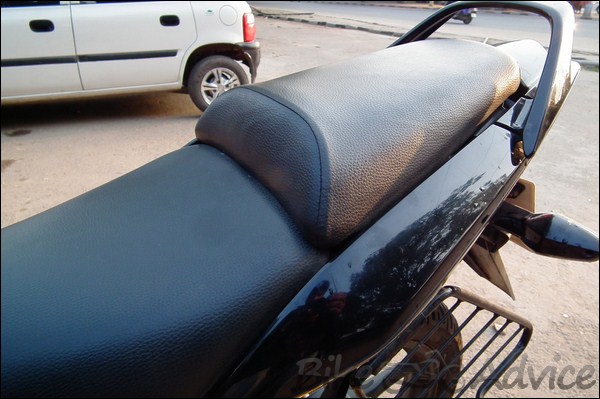 The exhaust is of black color but has a chrome covering which serves both safety and styling purposes. The split seats are are a prized addition. They’re quite comfortable and result in a raised rear seat which gives the pillion riders quite a different experience. The seating position is quite sporty and the foot rest seem to be on the right places. The bike has awesome looking black alloys and full chain cover to add to the styling. The black Stunner has its suspension painted in yellow colour which acc to me looks quite peppy.

Its bright broad headlight gives it a macho look and is responsible for quite some heads turning wherever you go. Another advantage of the Honda Stunner is that its not quite common as the bikes from Bajaj or Hero Honda so there is a exclusivity factor associated to it.

Now I live in Chandigarh and there are loads of traffic lights all around the city. And the only good point about them is that you get constant stares from ppl around you. Ppl in cars or on other bike still oogle constantly at my bike which makes my decision worthwile and makes me wanna do a virtual fist bump. 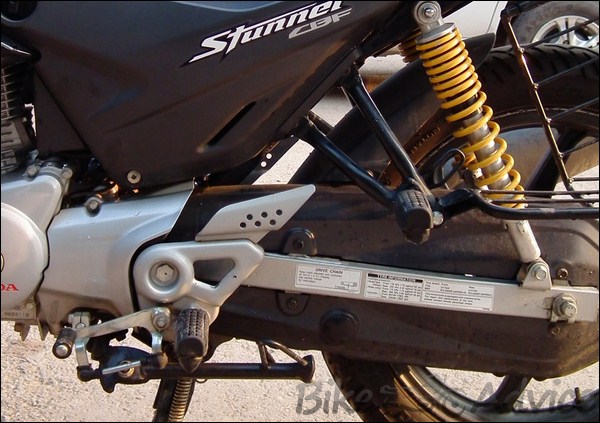 Honda Stunner CBF has a 5 gear transmission with the popular one down- four up setup. The gear shift is quite smooth and we can easily swith gears in city traffic with minimal effort. Personally I haven’t faced any problems in the gearbox in these 18 months. 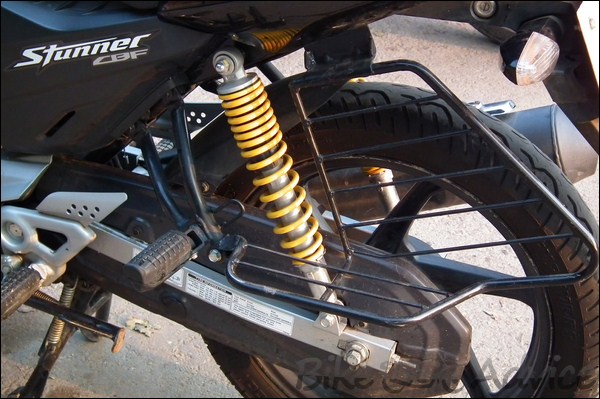 Stunner has tubeless tires both at the front and back. I must say the tubeless tires was a major factor that made me finalize my decision on this bike. The tyres on my Stunner are from TVS. The tires provide good grip and I have never really had any slipping or skidding problems in wet conditions. The rear tyre was punctured once owing to a unspotted iron piece on the road. Personally I think Honda could’ve done a better job by providing something like MRF Zappers .

Handling is a major usp of this bike. It drives and moves around in traffic with ease and minimal effort. It has its handle bard separate from the headlight and console assembly. There have been questions raised about the headlight visibility in corners etc etc. But my friend this infact helps in improving the bike’s handling as there is no dead weight attached to the handle bar. 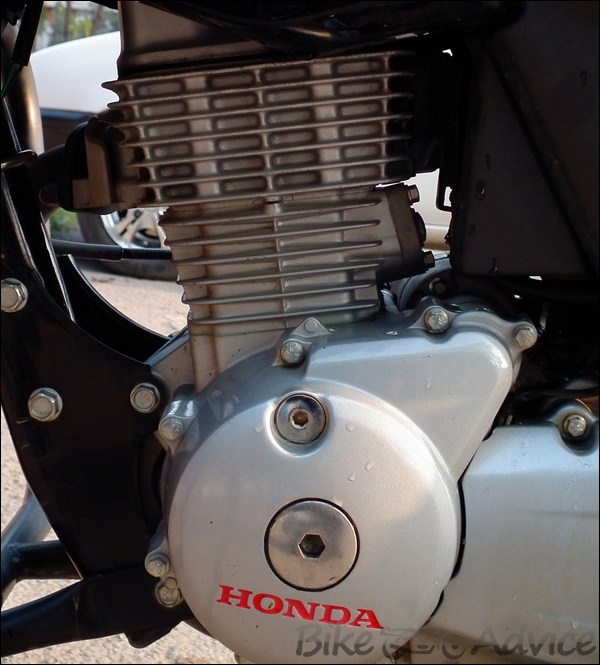 Honda Stunner CBF gave me a mileage of 47-55 kmpl. Ths usually varied with my driving style. Agreed this is quite less for a 125cc bike but i’m ready to compromise on this factor wih better styling and better road presence over other bikes in the same segment. Plz note that various Stunner owners have reported constant mileage of 60+. The mileage as you know increases significantly if you drive at constant speeds of 40-45, but dude that kills your biker instincts to the core. 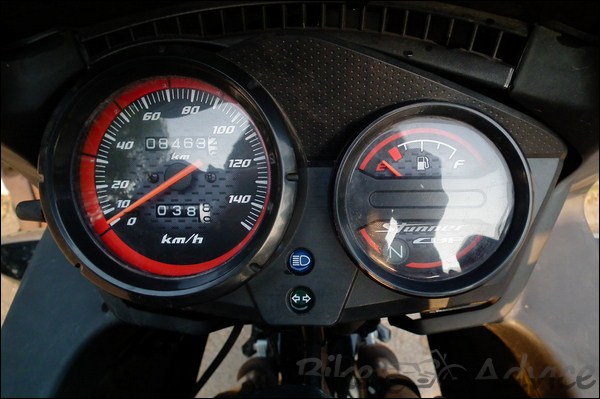 The bike’s dashboard is quite standard to current standards. It consists of an all analog assembly with the standard speedo, a tripmeter, fuel indicator. Along them comes the neutral, highbeam and turn indicator lights. I missed it having a tacho but eventually I got used to it. Buying a bike without a digital console proved quite a tough decision for me but that feeling went away when I saw few of my friends struggling with their digital meters showing crazy readings. 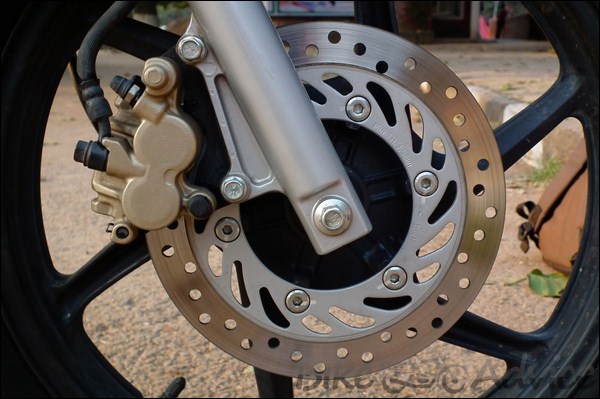 Honda Stunner CBF has dual disc brakes and they’ve saved me from crashes more than once. I’ve been in few tricky situations when suddenly someone jumps in front of you, you push the brakes with full force, the rear wheel locks down and you constantly pray for mercy while you drift forward in super slow motion with an insanely pounding heart. And i’m still here writing this review. I’ve never had an accident or even a minor crash and the braking of the bike has more to do with it than anything else. I need not say more about it.

Coming to its performance, as I said before the bike gives more than its worth when it comes to performance. Stunner looks and performs like a 125cc bike on steroids. It runs super smooth from 0 to 70. I personally have driven to to somewhat around 95 km/hr but that wasn’t at 100% throttle so I can safely say that it can do more. I wanted to do more but I guess I love my bike too much to test its extremes. After 70 km/hr slight vibrations start to creep in, but they’re very much manageable and expected in bikes of this category. 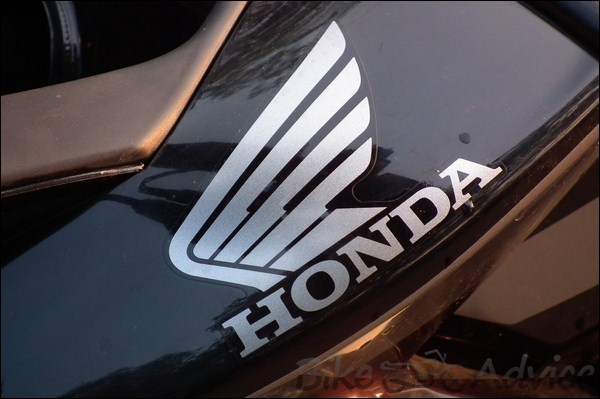 After owning the bike for a year and a half , I can safely tell you guys that Honda Stunner CBF is a total maintainence free bike. I take it to the service station every 3 months and thats all that i’ve spent on my bike. Till date I haven’t changed any of its parts besides a taillight bulb that costs Rs.15. Rest all is in perfect shape and boasts of the high build quality that Honda delivers.

Guys I paid Rs.55k (on- road price) for this beauty and those have been some well spent money. The bike has been a treat to drive and a dream to own. Its a owner’s beloved and a looker’s envy. It delivers what it promises and more. I’m not too much of a technical guy. I don’t go too much into stuff like torque, rpm etc etc, For me a bike that looks good, drives well and gives decent mileage is a good bike. 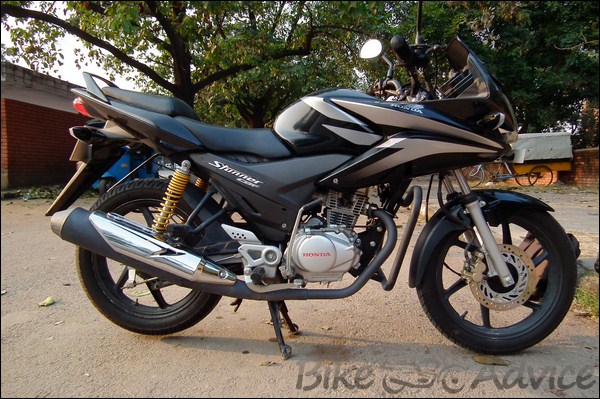 I’ve tried to provide you with plenty of pics from various angles so that you can have the best possible idea about the bike’s looks. All I can say is that even if you’re buying a 100cc bike or looking for a 150cc beast, do check out the Stunner once and you won’t be disappointed.

Thank you for your patience guys. Post in your queries, I’ll be pleased to answer them. Wear your helmet and stay safe.