Choosing the best among the two huge beasts which are almost identical is such a difficult task. But, when we go in depth comparing Honda CB Unicorn Dazzler and Suzuki GS150R, a lot is revealed making it easier for you to buy the right bike. Of course, by this time you would be quite impressed with the improvised looks of the new Unicorn named Dazzler but GS150R isn’t far behind catching up in terms of looks, performance, drivability and other factors. 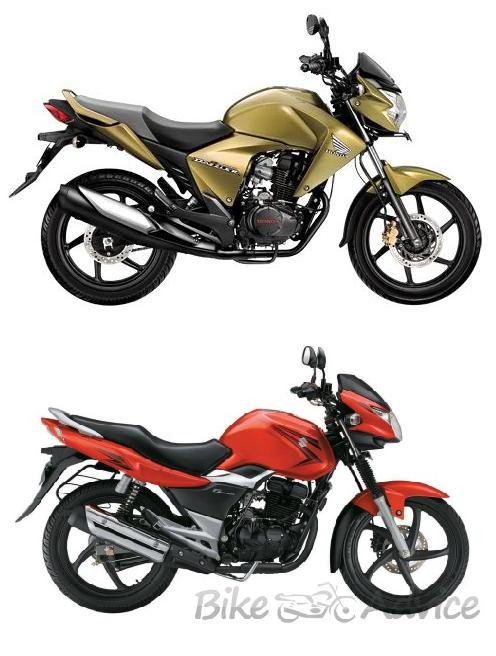 The long awaited comparison test is here between Unicorn Dazzler and GS150R.

The new Dazzler visibly outsmarts its predecessor Unicorn and sheds all those stone aged looks but more trendy to catch up with the likings of the young riders. It borrows a lot from Twister while Suzuki had meticulously worked for a sporty style that surprisingly doesn’t resemblance the new model bikes but has a tad touch of Apache RTR 160 and the Honda Unicorn looks.

What appeals the most is the extended tank shrouds in Dazzler while GS150R’s tank is huge in size, but definitely it’s not as bulky as the Pulsar but good enough to give the ‘BIG’ bike feel to many.

The indicator tail lamps look cool when they are not protruding to the sides adding style to GS150R but if we are to say, Dazzler loses the fight big time in this comfort area as it looks longer in appearance as the seats are more elongated for the purpose of comfortable pillion riding.

Dashboard is pretty awesome in the Dazzler which comes with a default analog tachometer and also a digital speedometer that keeps you updated all the info that you need. The dashboard in GS150R is more like the pulsar that combines digital and analog while providing information like fuel gauge, gear transmission etc. within the small space itself. Dazzler is a clear winner when it comes to stylish dashboard while GS150R has an awesome exterior body with smooth finish that endorses Suzuki’s build quality.

Colors are pretty dazzling for Unicorn’s Dazzler and GS150R looks more sporty with its most chosen color as Red. Unicorn boasts of its Honda logo in its tank while its competitor took a step ahead with some cool looking graphics that would appeal the youngsters better. Look wise, Dazzler would more suit middle aged men and some youngsters taste while GS150R with its sporty, rigid body will impress the younger lot alike. Again the opinion might differ, but on the whole this is an average rating.

At first glance, Dazzler will look promising on high speeds and has a better pick up just by a thread line compared to GS150R. But, the six gear transmission is something which is not ubiquitous on any 150cc segment bikes and it has its own advantage when riding. While it is 0-5 seconds pick up time for Dazzler to reach 55 kmph, it’s tad slower for GS150R but unlike its competitor, it can comfortable keep moving beyond 75 KMPH to reach the coveted 100.

GS150R is a high speed bike which can easily touch 100 KMPH and stay high without any visible vibrations. Riding the highways had never been better and you should try it on this one. Moreover, the bike which is on the bit heavier side makes it a better long tripper but it has its own flaws when you try to maneuver it in heavy traffic. Switching it from lane to lane takes expertise but the same goes for Dazzler which is little bit better in local traffic.

While Dazzler’s gear shifting is slow and steady, (some riders opine it makes noise at times and is not so smooth despite repetitive servicing), GS150R is quite easy and even on the 6th gear it doesn’t lag behind due to low speed.

Mileage for GS150R is around 45-55 kmpl depending on maintenance while Dazzler offers better mileage due to its lesser weight at around 50-55 kmpl. The rear disc brakes are installed in both the models while Dazzler has the new mono suspension but GS150R relies on the tested dual suspension with gas filters. But, from what we saw it doesn’t make much of a difference and suspension is almost similar in these two. When you are riding for long hours without a break, trust us Unicorn Dazzler is the best with enough wide spacing and aerodynamics that doesn’t put too much stress on your back.

Honda’s engine is tested on Indian roads for awhile now and comes with credibility for long term riding. Suzuki on the other hand had ventured for the first time solo and the engine is solid with very less noise yet Dazzler which comes in the Unicorn series will have long lasting performance without fading off with time. The tyres in both bikes are wide enough and you can comfortably drift across in sharp curves but better not try the same with GS150R as the bike is heavier and is more stable on straight driving.

The mono suspension offered in Unicorn Dazzler can last longer and doesn’t have any restrictions to fill up the gas but GS150R which manages to surpass the bumpy Indians roads might not be the best choice for those who don’t want to keep checking their suspension gas level. And, as we already said long hours drive might cause bit discomfort in GS150R, Unicorn manages to not show any stress level on the driver and pillion rider.

Other Side Of The Coin: 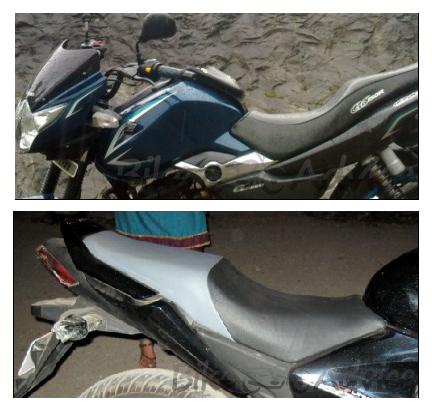 Honda’s Unicorn Dazzler and Suzuki’s GS150R are equally appealing, engrossing in its looks with some pros and cons. GS150R’s slow pick up is sure to annoy those who rely on acceleration than top speed. Better go for Dazzler or even a Yamaha bike but when on top speed nothing can beat the GS150R’s credibility. Dazzler hasn’t changed much since its Unicorn times but it will suit people who don’t want the Bajaj or Pulsar brand but inclined more towards long term road compatibility. Honda has a proven record in these grounds.

GS150R would largely appeal to big bike lovers and those who like to ride slow but want high top speeds, comfortable ride experience apart from good gear shift ratio. The sixth gear is an advantage for GS150R which is unique and where other bikes in 150cc segment fall flat.

Unicorn Dazzler is smaller compared to its predecessor Unicorn and sports a neat, gentleman overall look. It is suitable for those who like ride quality and heeds less to sporty looks but comes with a cool dashboard. Colors are aplenty and servicing would be quite easier with many showrooms spread across all major cities.

Comparing Unicorn Dazzler and GS150R, the latter is a much better choice if you are a bike enthusiast who wants high top speed, speedy transmission, smooth riding and also to show off a bit! For others who prefer a 150cc segment bike, Dazzler which is tad faster with good engine reliability, service and comfort would make a reasonable choice. Needs differ and choose based on your requirements, and we are sure both of these bikes wouldn’t displease you at all!