As the festive season completed last month, HMSI has again sold more number of two wheeler compared to Bajaj Auto in the single month. As per an estimate, HMSI has sold 2,05,000 units in the domestic two wheeler market compared to 1,98,000 units of Bajaj Auto in the month of December 2012. This is the first time the difference of number of two wheeler has remained under 10,000 units after the month of June 2012. December is generally considered as a soft month for automobile companies and especially for Bajaj Auto. 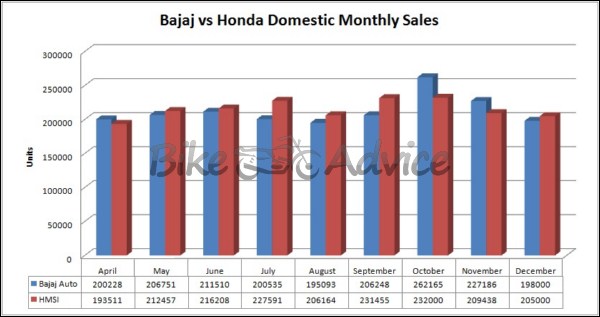 HMSI sold 19.34 lakhs units during April to December 2012 compared to 19.08 lakhs units of Bajaj Auto for the same period in the domestic market. HMSI has maintained the lead of around 26,000 units in the year till date figure. As expected earlier, there is not much difference of two wheeler units in the month of December between Bajaj Auto and HMSI. We expect a close fight between Bajaj Auto and HMSI from this month and we also believe that Bajaj Auto has still fair chance to outpace HMSI for the financial year 2012-13. Stay tuned for the next three months.