Honda Motorcycle and Scooter India Pvt. Ltd. (HMSI) on Friday launched the new version of its gearless scooter Activa. The company also announced plans to exit the geared scooter segment to focus on the gearless scooter market, besides increasing its share in the motorcycle segment. Priced at Rs. 39,800 (ex-showroom, Delhi), the new version is powered with 110 cc engine. It comes with 15 per cent increased margin compared to its earlier version. 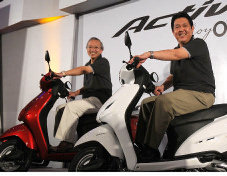 “Though under test conditions we have got a mileage of 64 km a litre, it will give 55 km a litre to customers. We hope to sell 5.50 lakh new Activa in 2009-10,” said HMSI Head (Sales and Marketing) N. K. Rattan at the launch ceremony here. HMSI President and CEO Shinji Aoyama said, “We will stop producing Eterno and completely come out of the geared scooter segment to focus more on the fast-growing gearless market.”

Stating that HMSI was looking at a total of 18 per cent growth in its two-wheeler sales in 2009-10, Mr. Aoyama said Eterno was selling only about 40,000 units a year, so it was not logical to continue with it. “However, we will come out with a new model to fill this vacuum,” he added. HMSI is expecting an impressive 17 per cent growth in the current financial year with total sales of 10.6 lakh units.

“The Indian two-wheeler market witnessed a growth of five per cent in the current fiscal, whereas we grew by about 17 per cent. We expect to keep this momentum going. For 2009-10, we have set a sales target of 12.5 lakh units, of which 7.4 lakh will be scooters and 5.1 lakh will be motorcycles,” Mr. Aoyama said.