India’s largest scooter manufacturer HMSI (Honda Motor Scooter & India Ltd.), is all set to launch refreshed model of CBR250 by the end of February 2012. The new refreshed CBR250R will get tri-color scheme which HMSI showcased at Auto Expo 2012. With the new tri-color scheme CBR250R will become Rs.1,500 dearer compared to its earlier version. 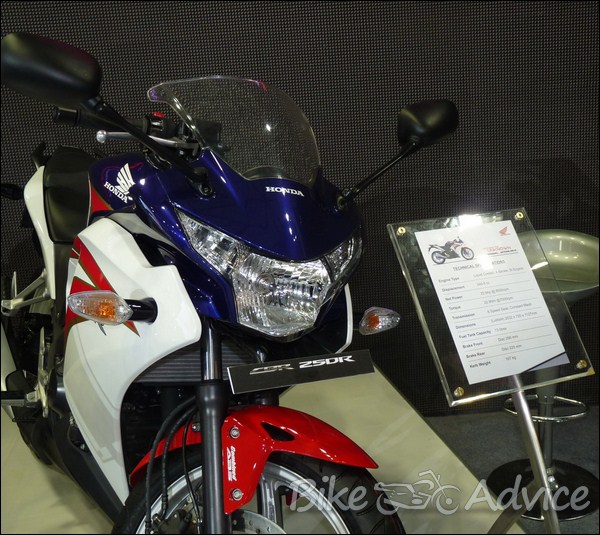 Naresh Rattan, vice-president, sales and marketing, HMSI said  “The company is due to launch the CBR 250R shortly in the market. The new bike has gone under production by the middle of this month.  There is no dearth of demand for premium priced bikes in India despite a broader slowdown in demand for the commuter bikes witnessed by a few players. The market is growing rapidly even is such times. There have been issues relating to components shortage due to the recent floods in Thailand which has impacted local production. This matter is being sorted out before we launch the new version. “

It is to be noted that CBR250R sales has gone down in the month of January 2012 to under 140 units compared to 2,500 units – 3,000 units a month average.  The major reasons for dip in sales are shortage of parts and introduction of new motorcycle from competition. HMSI is launching the refreshed version to stabilize the sales. It is also phasing out the current version of CBR250R from the market.  It is also planning to launch CBR150 in the month of March. It seems that HMSI will leave no stone unturned to retain and strengthen its position in premium segment.