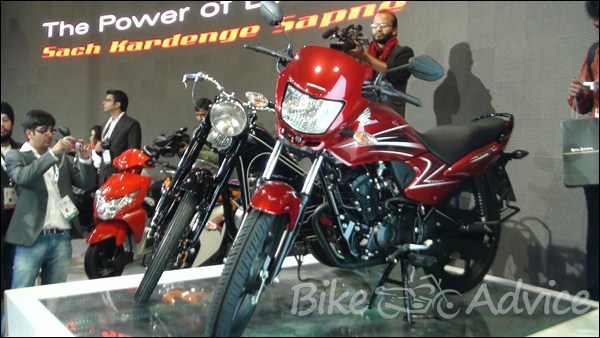 India has always been a great pitch for two wheeler makers to step in and the growth rate that the Indian market offers them is literally close to none. HMSI (Honda Motorcycles & Scooters India Pvt Ltd), a wholly owned subsidiary of Honda Japan has made maximum use of the Indian markets and has and is reaping all the benefits that it can out here.

Now, the company has come up with a new strategy to conquer the No.1 position in the Indian two – wheeler market. The company has gone deep into the sub – continent and devised a geographical advantage by having decided to concentrate on the North Eastern part of the nation.

The launch of the Japanese major’s new mass segment commuter bike – The Dream Yuga will aid the company in effectively accomplishing this task.

“With the attractive unique features such as 72 kmpl mileage, MF battery and Honda Intelligent Ignition Control System, we are sure of very good acceptance for Dream Yuga among the target group across North East,” HMSI Regional Head – East, Mr Shreenath Kamlapurker, told PTI.

No company has so far considered this market as one with a huge potential and probably this is what should have made Honda turn it towards its side. When asked about the company’s performance in the North Eastern market, he said “We (HMSI) have 12 per cent market share and are looking to grow in volume by 30 per cent over last year.” That’s seriously a huge task for the company but doing every impossible thing is what Honda is known for on the Indian market. The way the company marked its entry into the market with one scooter and is now eyeing the top position is indeed a management lesson for all.

HMSI plans to sell 3 lakh units of its products across India in the year 2012 – 13. The company has very high hopes that the North Eastern market will play a major role in posing this sales figure for the current year.

The company currently has 21 dealerships in the North Eastern part of the country and is seriously considering opening many more strategic dealerships which would directly aid in boosting the sales figures.

Mr Shreenath Kamlapurker said, “We have 21 networks in the North East currently and will review it based on growth of industry and potential.”

He was very sure that the Dream Yuga will be a massive hit along the length and breadth of the nation and would set up new benchmark in the mass commuter segment.

We do agree that the mass segment is a powerful tool for every company to play upon. But, will Honda use the trump card in the right manner? Will Dream Yuga help Honda in moving forward reaching the pole position in India? Pour your thoughts on this in the box below.