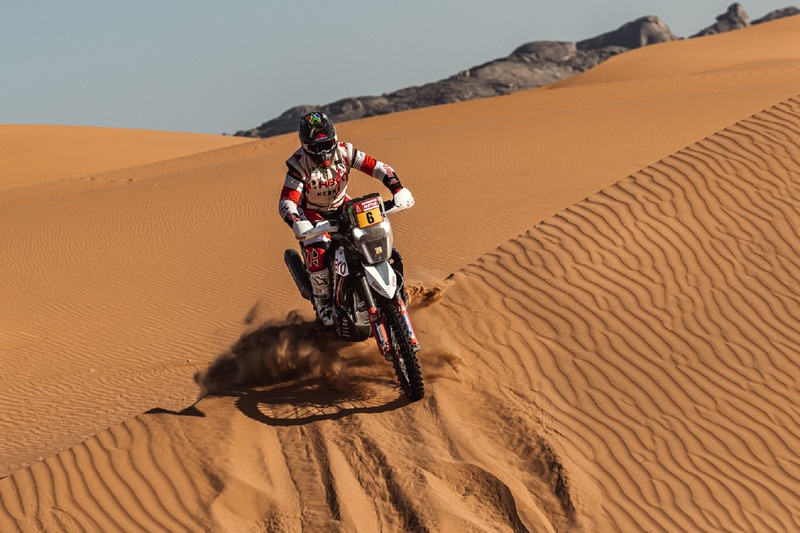 Hero MotoSports Team Rally have finished their historic run in the Dakar Rally 2022 with their first win and podium and both riders completing the most grueling event of the rally calendar.

JRod has been with the team from the beginning and similarly entered his sixth consecutive Dakar event. Having lost his mentor and brother-in-law Paulo two years earlier, JRod overcame mental hurdles to perform extraordinarily and went ahead to win his and the team’s first stage win and ended at the 3rd place – which he dedicated to Paulo. He finished 13th overall in the RallyGP class.

Their second rider, Aaron Maré, who was a last minute entry, adapted impressively with the team and the Dakar conditions and finished 15th overall in the RallyGP class. His quick adaptation and consistent performance garnered huge praises from various teams and fellow riders.

Dakar 2022 was held for the third consecutive time in Saudi Arabia and was run for 12 stages in over 14 days. The rally kicked-off on January 1st, 2022 with a short Prologue stage, and then traveled through various cities across the length and breadth of Saudi Arabia. Covering a total of 8000 kms, including the liaison stages, the competitors returned to Jeddah for the finish podium on January 14th.

Hero Motosports Team Rally also credited their stellar performance to the presence of Indian legend CS Santosh at their camp which boosted the team’s confidence and morale, which led to the Rally Team finishing with 8 top-10 finishes by the end of the gruesome rally event.

The team will next appear in action at the second race of the year under the FIM World Rally Raid Championship, at the Abu Dhabi Desert Challenge in March 2022.

We send our heartiest congratulation to the Hero Motosports Rally team for their stellar performance that etched their and our country’s name in Dakar history. We wish them all the best for their next rally endeavours and will continue to follow their run.