India’s largest two wheeler manufacturer, Hero Motocorp. recently announced its quarter two result for the financial year 2011-12. The company has reported jump of 19.4% in net profit compared to previous year. This is the first quarterly financials of company after the company changed its name. The results are above the expectation of various brokerage houses. The profit of company is largely driven through sales. The company sold 1,544,314 units in July to September 2011 quarter up by 20.09% compared to 1,285,944 units in previous year same quarter.

Mr Pawan Munjal, Managing Director & Chief Executive Officer, Hero MotoCorp said, “Our bottom line results reflect our record top line performance over the past six months. This performance has come despite the rising food inflation and fuel costs. These two areas remain a concern for the industry, as it might adversely impact consumer spending in the coming months. However, we remain confident of carrying forward the buoyancy in our sales. We expect our retail volumes to peak during the festive month of October, and in anticipation of rising market demand for our products in the coming months, we have been augmenting capacity at our existing plants,” he added.

The company has reported better than expected OPM (operating profit margin). The company has reported OPM of 15.76% compared to 13.36% last year and 14.39% last quarter. The year on year jump in OPM is result of Royalty treatment. Previously it was part of operating expense but now the company considers it under the head of Depreciation. However, on the quarter of quarter basis the company gains 127 basis points in operating margin. The quarter on quarter margin expansion is attributed to better realization and lower raw material cost. The company’s average realization per vehicle remained Rs. 37,456 compared to 36,858 in previous quarter and Rs. 35,082 in the last year quarter. Raw material cost as a % of Net Revenue remained at 73.72% down from 75.23% in previous quarter and 75.05% in the previous year quarter. However, the company’s total expenditure is gone up due to increase in employee cost and depreciation.

It seems that going forward we will see better profitability from the company as the raw material cost is going down and the company’s royalty expense is now fixed rather than % of sales. Further, on the back of new launches and better realization the company will have better net income in upcoming quarters. 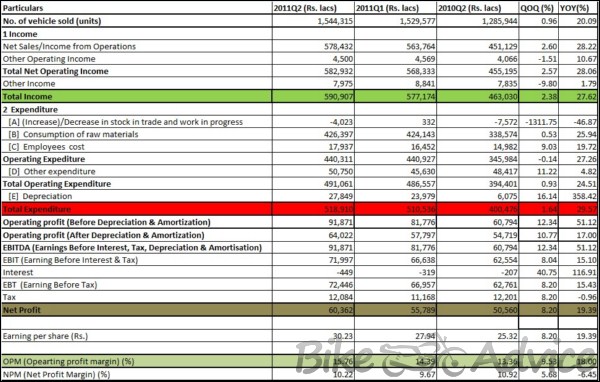