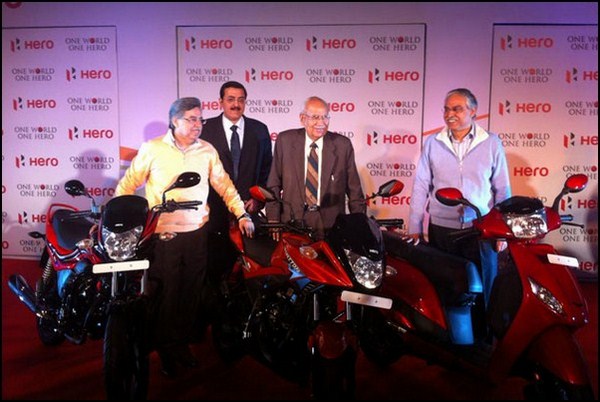 It seems that Exports is the new buzz word for the Indian two–wheeler makers. Just a few days back, we had reported Bajaj Auto’s interest on exports with its various strategies. While this Indian company is concentrating keenly on exports, Hero Motocorp has now decided to strengthen its presence in various countries across the globe. One of its most preferred destination is gonna be the African market.

We were already hearing some news on Hero’s plans to enter this market owing to the untapped potential here for several reasons. The reason for this less competition out here is the fact that not everyone is presently interested with this massive market.

As a first step Hero Motocorp has announced its plans to facilitate setting up of assembly units in the African nations of Kenya and Nigeria. This would mark the beginning of setting a global footprint for the world’s largest manufacturer of two- wheelers. This strategy would also enhance the company in establishing itself in the global market following the split with the Japanese giant – Honda.

HMC is now trying to be more environment friendly with due importance now given to reduction of emission from its products. As sweet memories, this is the right time to remind you all about the company’s first hybrid scooter – ‘Leap’ that was displayed in the Auto Expo held in the capital earlier this year.  This product might soon take its form in the production stage and might hit the roads anytime soon. As a part of its expansion strategy, the company is also eyeing companies in the form of partners on which it would invest and would hold an equity stake. Answering a question on this, Mr. Pawan Munjal, Managing Director & CEO, Hero MotoCorp, said, “By 2015, we will have new emission norms. So a lot of work needs to be done for our entire range of products and we will take help for technology from them.”

Besides marking presence merely in the African market, Hero Motocorp would also try its hands in the Latin American market. “We will have assembly plants in Latin America and Africa and that will happen over a period of time. Kenya and Nigeria will have assembly operations,” This December, Nigeria is expected to see the first ever launch of a Hero Motocorp’s product out there and in about half a year from then on, the assembly units would take life and the operations would commence. The distributor hunt for the Kenyan market is also finalized by now. “Assembly operations in Kenya will also start soon. We have already finalized a distributor for Kenya,” he said.

The first market that the company would be hitting in the Latin American market would be Columbia and the same would have the first assembly plant for Hero Motocorp in that region, as of now. There is sufficient stock of Hero Honda products here and this has to be completely sold out and cleared before actually getting into the market with a newer brand name. “It will take some time as Colombia requires specific amount of local contents under the regulations,” he said, adding that the company’s earlier partner was still selling erstwhile Hero Honda bikes as there was substantial stock.

For a question answering the company’s overall export strategy, Munjal said: “I am looking at hubs to serve at different countries. For example, Colombia could be one of the hubs and similarly Nigeria and Kenya could also be other two hubs.”

These strategies on marking global footprints will indeed throw great significance for the Indian products in the global market. Also, this would facilitate more products to be launched by these companies and probably that’s exactly what we, at BikeAdvice are craving for!