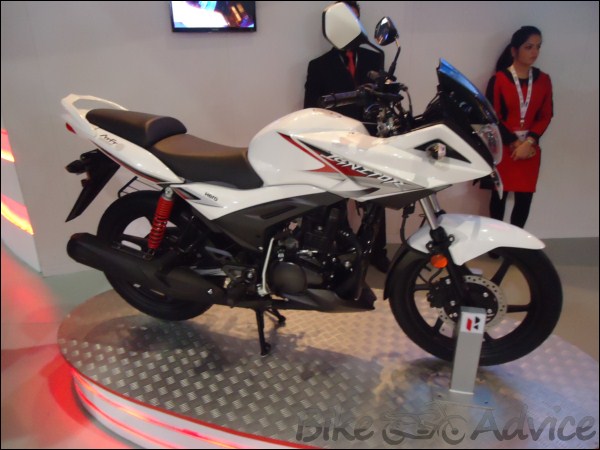 Finally, Hero Motocorp has launched its Ignitor motorcycle. The company has launched this motorcycle in two variants, the Drum brake variant will cost Rs. 55,900 ex-showroom Delhi while the Disc brake variant will cost Rs. 57,900 ex-showroom Delhi.  The company will soon launch this motorcycle across the country. This is the second new product from Hero Motocorp after the launch of Maestro scooter. Earlier the company unveiled three new products in the Auto Expo 2012 out of which Passion Xpro is still to be launched.

Hero Ignitor is nothing but rebadged version of Honda CBF Stunner. However, there are certain changes made by the company. Hero Ignitor will generate maximum power of 11 bhp at 8,000 rpm and maximum torque of 11 Nm at 5,000 rpm. The maximum torque will peak at 1,500 rpm lower compared to Honda CBF Stunner. It means better fuel efficiency and you can accelerate the vehicle quickly. Apart from this you get an advance digital speedometer and color choices compared to Honda CBF Stunner.  Ignitor is available in four colors, Vibrant Blue, Sports Red, Pearl White and Panther Black.