Hi all, this is Shyam Prasad Nandigam, basically from Eluru-Andhra Pradesh, currently residing in Bangalore-Karnataka. Today I am narrating a love story of mine, and yes it’s a love story. A love tale between man and machine. I am 5Ft 9inches tall currently doing the most boring job in the world, i.e. “Working as software Engineer”. I am not a racer, but I love machines, sports bikes, and cars and am a freak of long tours. 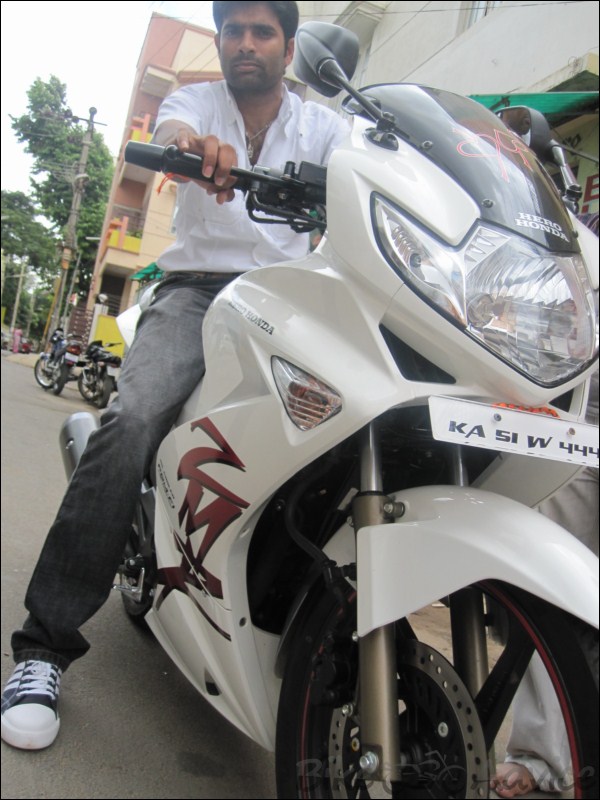 It all happened in the year 2003, when Hero Honda launched the first 225cc bike in India with brand name “Karizma” with the tagline “Jet Set Go”. I fell in love as soon as I saw it, may be this is called as love at first sight. Later in 2007 they upgraded the graphics and named it “Karizma R” with the tagline “Always Game”.

Undoubtedly the new version impressed me more than the previous version and I strongly decided in my mind that one day or the other I am going to get that one. But in year 2009, hero Honda came up with a complete new look to the bike and named it as “Karizma ZMR” with the tagline “Above All”. As in all love stories, there is a villain, and here comes the villain “Money”. Due to financial crisis it took me 7 years to marry my lady (here on wards I will refer to my bike as “My Lady”). Initially I thought of taking “Karizma R” as it is 20,000 rupees cheaper, but after so much of research and reviews (even I had taken one from Deepak, bikeadvice.in) I decided to go for “Above All” lady. 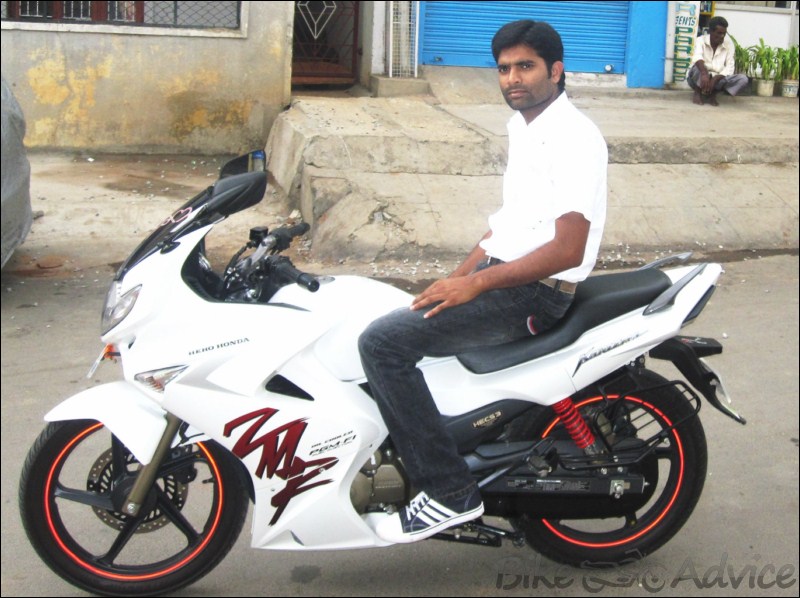 For all die hardcore fans of R15: I agree that R15 is the highly advanced technological bike, but it is a bike for racing. It is good on circuits, but surely this bike is not meant for city riding and touring. For all die hardcore fans of P220:I agree that pulsar 220 gives more power when compared to 225cc Karizma, but there is no reliability for Bajaj products, within 2 years the bike performance is lost completely. For a guy who changes bikes frequently, he can go for Bajaj, but one who plans for a long relationship, HH is the first choice.

What made me to pick ZMR over Karizma R?

So I guess, 20000 rupees extra is worth in long run due to the petrol costs when compared to Karizma R. The bike has the best comfort as I found that it doesn’t shake at higher speeds, the braking is better, the suspension is excellent and the beat of the engine is awesome. You will definitely fall in love with the beat. The Oil cooled technology does its job at its best; I didn’t hear any sounds even when the engine is stopped after a high speed run. (Generally we hear some sounds like ‘tik’ ’tak’ while the engine is cooling) Though it looks heavy, it doesn’t feel that you are carrying a heavy vehicle; you won’t feel that you are riding a bike which weighs 159Kg. 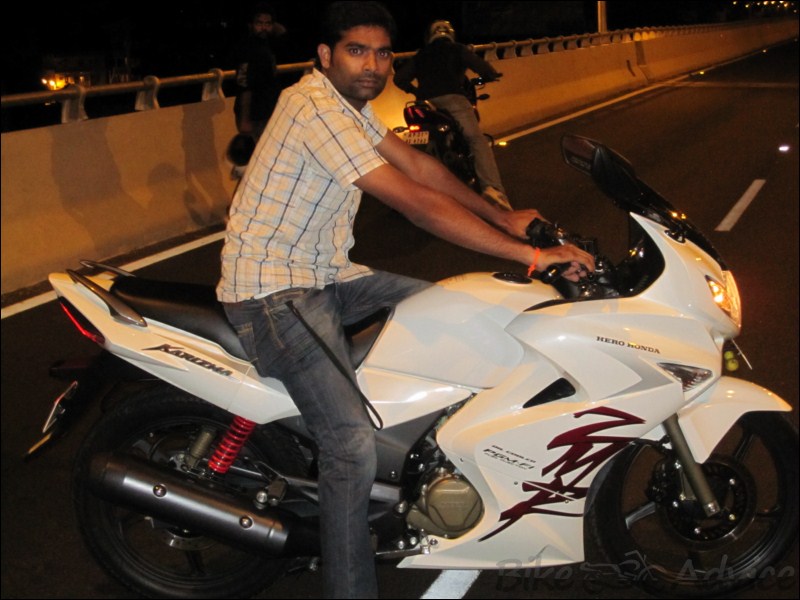 The tubeless tyres are perfect for a touring bike; it does its job in reducing the weight. I reached a speed of 113 Km/h, but surely can say that we can extract more. I am just waiting for the opportunity. I was inspired by my best pal who named his bike. I did the same. Let me introduce my lady “Goldy”; A small review of the same:

Styling: It’s not a sticker job, but a complete makeover. Karizma has always been regarded as a bike with a cool design. The Karizma ZMR takes this forward. The bikini fairing is gone and the full fairing is here. The distinctly shaped headlamp with twin position (pilot) lamps reminds me of Suzuki’s GSR series. The paint quality is top notch and many would praise the body graphics and decals. Karizma ZMR looks electric in pearl white. 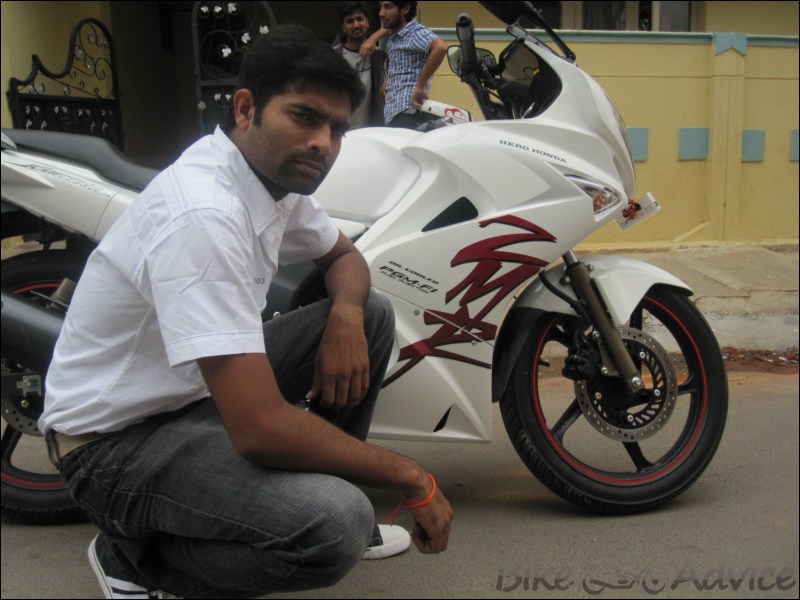 Engine: The 16 bit ECU processor uses idle air control valve and Honda Evolutional Catalyzing System (HECS) ensures better idling characteristics and lower emissions. But all these have pumped up engine power by a meager 0.6bhp to 17.6bhp at 7000rpm and unchanged 18.35Nm of peak torque. A five speed transmission and anti judder clutch gets the juice out of this mill. Not so excited! Remember don’t judge the bikes by spec.

Performance: You can’t see but feel! Under the fairing many things have changed. Now you have 6-sensors working overtime to ensure that your ride is pleasure. The 223cc, PGM-FI, oil cooled mill uses throttle position sensor, bank angle sensor, crank position sensor, oxygen sensor, manifold absolute pressure sensor and intake air temperature sensor. It’s refined and the acceleration is steady and smooth. Even on potholed bad roads ZMR offers superior ride quality. It doesn’t matter whether you are a rider or a pillion, it offers supreme comfort. Hero Honda retains the ergonomics of Karizma. Addition of split handle bar increases your comfort.

Dashboard: The digital cockpit welcomes you with a message “Welcome aboard Shyam… ” and sign off with “Bye, c u soon Shyam”. You have to toggle between the two buttons mounted on top of the speedometer to switch modes. The panoramic large display gives you everything you need except in hot sun. Real time mileage indicator, 2 trip meter and digital bar tachometer, digital fuel level indicator, digital clock and digital bar tachometer should be more than enough for any mathematician to analyze data.
Downside:

Verdict: This bike to put in simple terms the Tourer has become even more better with the advanced FI technology that is reliable at high altitudes and also being it as Hero Honda, will work for the years to come as strong as a Stallion. So, people who can afford that extra money will definitely be satisfied with that extra features that Hero Honda gives.