Hi friends! My name is Faizan and I am 22 years old. I am pursuing my engineering degree in computer science. I was very fond of gizmos and autos by a very early age. I was just 5years old when I owned my first A-von bicycle and I used to ride it like my elders did on roads with their motor cycles. But I always desired to make my feet relax and let hand do all the work on acceleration. And by time passing on, it was a summer day, when I was 9years old and my uncle asked me if I would like to ride his motor cycle. It was my first experience with motorcycle named Hero Honda Sleek despite the fact that my feet were not able to reach the gear pad and the brake pedal.

And it was then I developed passion for bikes. From my 8th standard, I used to ride different bikes often but none of them belonged to me. Hero Honda CBZ was the first bike that I ever desired to own in my teen age. But my parents never allowed me to own one as they were afraid to loose me. Seems funny, but accidents were more frequent those days. Many a times, we friends used to skip school and go for bike ride. One of my friends owned CBZ, black in colour and we guys rocked the boulevard roads. When I was done with my matriculation, I insisted my father to let me posses one. My passion for bikes was approaching extremes. But my father never agreed and one day delivered a LML NV scooter at home. It was annoying but later on, pretty enjoyable on the same. I always tried extreme and I made it to speed up to 100kmph. It was when I was in higher secondary.

But as soon as I stepped into engineering college, it seemed embarrassing for me to ride a scooter. May be a trend in some areas, but it was humiliating for a youth rider in my place. So I finally decided to go for a bike now. I was grown up enough and it was easy for me to convince parents for a bike. And finally they agreed. Time was to choose a bike for my future times. Discussed a lot with friends, searched forums and blogs and finally opted to go for Hero Honda Karizma, Karizma R. I owned it in early 2008. It was my first semester of degree. 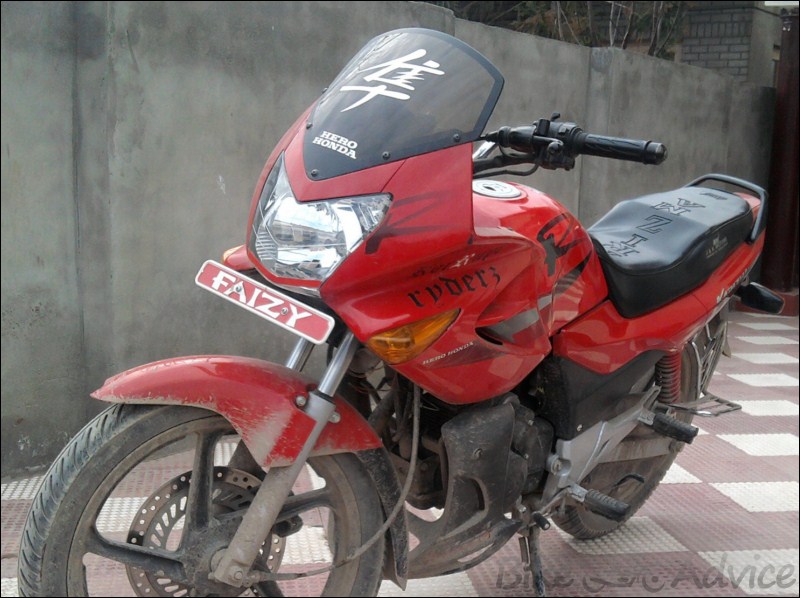 I have been riding my Karizma for about 2 years and experienced a lot about this machine. It is best, but some may feel only its worse part. As how you ride bikes, you can decide what type of bike you should own. Ultimately Karizma was the best machine I could get from Indian domestic bike market at some affordable price. I have not many miles on my bike, less than 10k actually but I have studied it as it was my engineering subject. 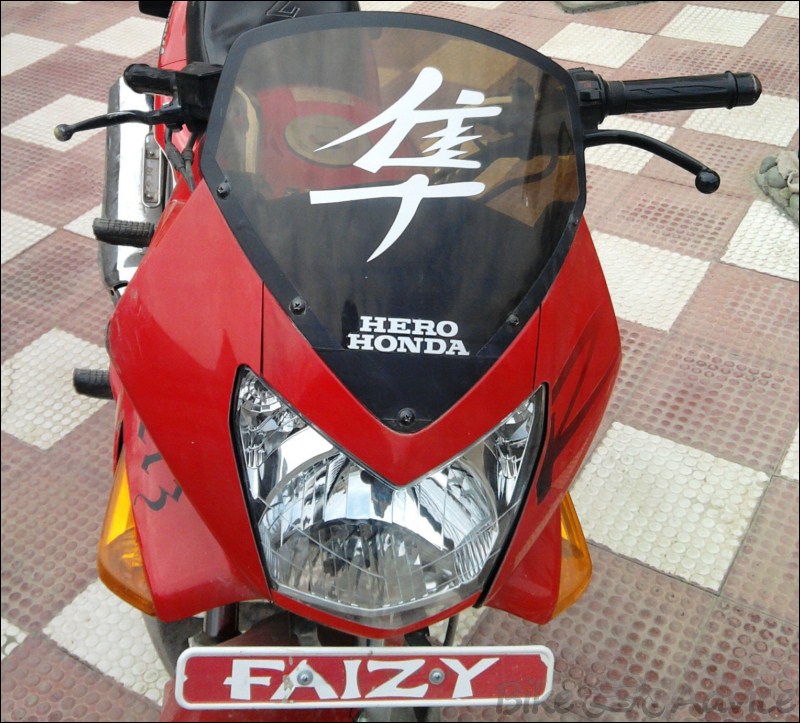 Engine: Engine has many parts which are all equally responsible for its efficiency, power, durability and strength. Many people just assume engine capacity in cc’s as the important factor of power. But it is never true. Power and torque are two more aspects to be concerned. Karizma R has an engine of 223cc (often written as 225cc) in capacity and >17bhp in power.

Speed: The meter displays a top speed of 200kmph. It can never touch so, but a real biker on the back of Karizma can swing the needle 160 degrees. I have crossed 140kmph many times and I never experienced shiver from the bike. But avoid such speed on when you are not accompanied at rear. This is because bike’s weight is just 150kgs and not enough to manage stability at extremes. Bike is set to gain 60kmph in just 3 and a half seconds. And you can top 100kmph in 3rd shift at ease. It is not on booklet but my own experience with bike.

Brakes: First of all, foot brakes are blended perfect so as to avoid skids and front disc brake is not like of Bajaj bikes, which can cause accidents at instant action. Combo of rear and front brake together will always let you have complete control over machine.

Body And Design: Karizma is one of the tall and long bikes of nation, so perfect for those who are round about 6’ tall like me. Body seems carved in the shape of tiger and graphics are featured for sports and racing look.

Handling: Handling is always easy when handle is not attached to wisor body.So light and swift. But the rotate angle of handle is not wide. So hard to turn in narrow ways.

Mileage: Karizma serves you as you will ride it. Mileage can vary on your riding. Rash riding and topping speed burns oil litre just after 15 to 20 kms but riding highways round at 60kmph can make your mileage touch 35 to 40/ltre. This can be further enhanced with good engine oil and proper servicing after regular intervals. 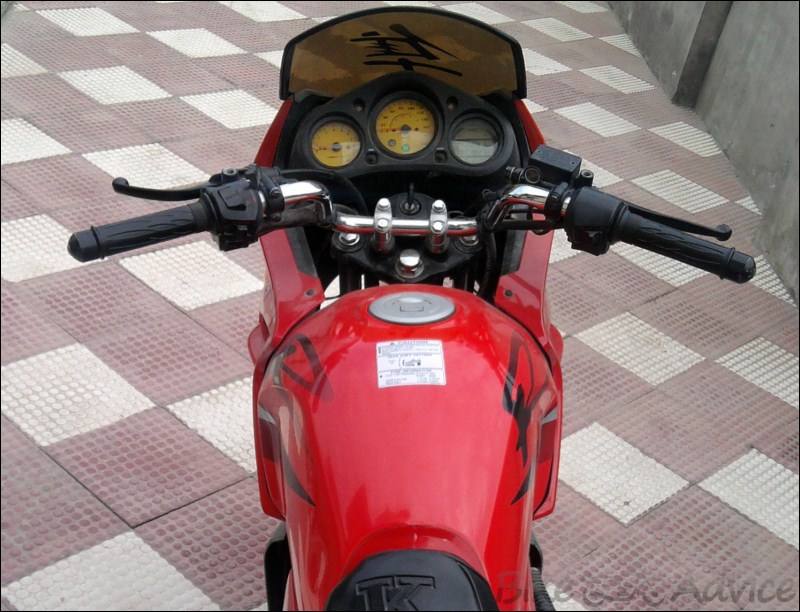 Reading my words till now must have put you in consideration that is this bike then a perfect bike according to Faizan. But no! Demerits are there as in every case of two wheeler machine and not yet worked on by Hero Honda. Even New Karizma ZMR is accompanied by some of them.

The main disadvantage of the bike is its rear tyre. It is not a big concern for those who live in posh areas and don’t need to ride tough and muddy roads. The grip is the actual concern. The tyre is not having good grip in the centre of circumference. It makes it to skid on slippery roads and very difficult to lean on curves with such low width tyres.

Another thing is that, it lacks leg guard. It may be a disadvantage for many but not for me at least. I met 3 accidents in these two years riding Karizma and my legs were never severely injured. Infact bike is designed for perfect safety. 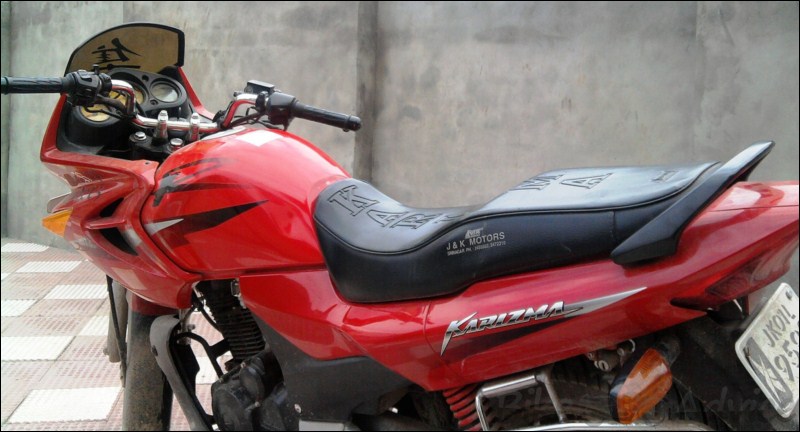 Horn that bike is accompanied from showroom is not suitable for bike. So, most of the Karizma riders, prefer to replace it before going for first ride. One more fault which I have seen in many other Karizmas beside my own that its wisor is never stable and keeps on vibrating at high speeds. The demerits and merits may vary from rider to rider as per likings and disliking but faults would never. And few of them are above which I have analyzed myself.

Conclusion: A verdict about Karizma on my behalf is:

A bike that can rule roads; has a pick up that is unmatched with any other in Indian domestic market (except Kawasaki ninja), great with style; not to worry on overtakes, very good shock absorbers, bad on curves and acceptable on for mileage. This may be short but if any other query regarding Karizma R. You are most welcomed to ask and I would love to answer you.

Thanks for reading my bike history and experience till last word! 🙂