My fascination with wheels began when I was 8. It all started with an old bicycle from my uncle’s childhood. The joys I had from speeding through the open road and exploring those unexplored alleys is hard to express in words. From the very beginning I was a racer and an explorer. By the time I was 13 I had my first ride on my dad’s bike. I  remember those afternoons when I used to wait for my dad to come home and fall asleep and then I would steal his keys and go for a breathtaking ride. The thrills I had was worth all the cop troubles and fights I had with my parents. 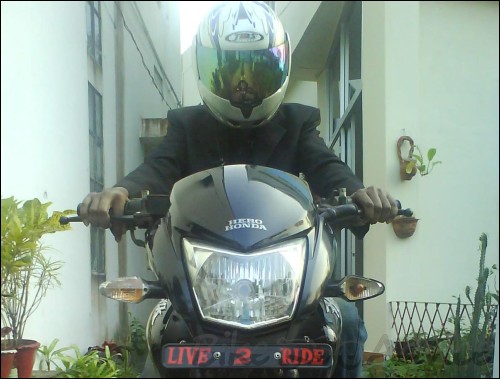 The fact that my dad’s bike was a Hero Honda Splendor never stopped me from racing. Over the years my ties with bikes strengthened and by the time I was 17 there weren’t too many things that I wouldn’t give up for the thrills of biking. As my O level exam approached my parents promised me a bike if I can come up with 5 A’s. My result came out in january of 2008. It was the happiest day of my life! Time seemed to be the only thing that stood between me and my dream machine. The toughest realization of my life came when I learned that my parents have no intention of keeping their promise.

After six months of cold war my parents gave up. My insane love for 2 wheels has conquered all conspiracies. In July of last year I finally got the green signal. Since I live in Bangladesh I was restricted to 150cc. My initial choice was Pulsar 150 since some of the craziest people I knew had that bike. I also liked it for it’s one of a kind tail light and digital speedo. One fine evening I saw a hunk and instantly went insane over it. The next morning I booked it from the nearest Hero Honda showroom. 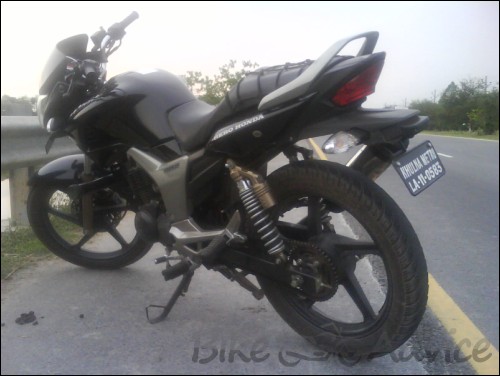 I had to supress the racer inside me for a while due to the engiene restrictions of the new bike. The first thing that inspired me to buy this bike is the massive fuel tank. I also loved the raised back section and the split seat. The manual instrumentation is the best I have seen so far. The headlight was okay but it could have been more aggressive like Apache RTR.

Days slowly turned into months and by now I have had this bike for 15 months and covered almost 16000 kms. To this day I have no regrets about my bike. If I am given the same amount now and told to buy a bike I would once again buy a Hero Honda Hunk. Of course if money was not a problem I would have bought the Yamaha R15. Pulsar 220 may be the fastest indian bike but being just fast isn’t enough. A bike needs to be controllable, stable and comfortable.

The best thing about the Hero Honda Hunk is the smoothness of it’s engine and it’s stability at high speed. The bike stays rock solid up to 7000 RPM or 85KMPH. There is a lot of controversy about the top speed but I was able to take the bike up to 110KMPH on leveled road. It is possible to go faster while going down a bridge. Hunk reaches 100KMPH effortlessly but takes some time to reach 110. The acceleration is excellent up to 80KMPH, which can be reached in 3rd gear. It is enough to outrun any 150cc bike except R15. A lot of people says that hunk is not good for tall people because it doesn’t have adequate room for knee but despite being 6ft 3in I never experienced any problem.

Unlike Pulsar the clutch is very responsive and the transmission system is as smooth as butter but it often needs adjustments. The front disc brake is very responsive and is good enough to give stoppies. The rear drum brake could have been better. Pulsar offers more sensitive braking but I don’t think it’s as controllable. Despite being heavy Hero Honda Hunk ranks high in maneuverability. Snaking through traffic and cheating death by inches is what makes bike the craziest and the most thrilling form of transportation. 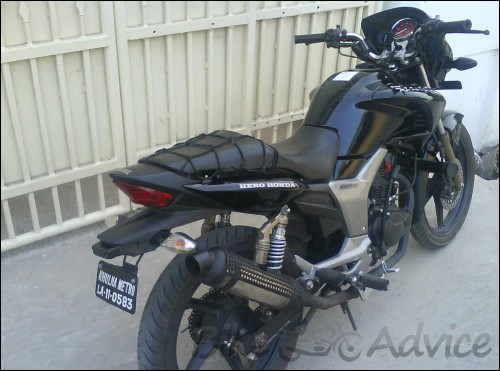 Fighter planes may be more thrilling and fun but it is a little out of budget. For leaning and taking tight corners hunk is better than Pulsar or Apache. However in this case Fz-16 remains on the top due to mass centralization. A lot of people has the wrong idea that wide tyres increases lean angles. Of course wider tyres gives you more traction at corners but the handling of a bike depends on mass centralization and riding position.

Mileage is another issue where people vary in opinion. Since I always like to rev my bike at lest up to 6000RPM I get a milege of 35 KMPL in city. On the highway I once got 70KMPL. To achieve this I kept my bike at 50KMPH in 5th gear and applied no brakes. Anyway under normal riding condition people get a mileage of 45-50KMPL. I have enjoyed a number of road trips on this bike with relative comfort. As long as the road is smooth you can easily cover 200+ kms very comfortably. The comfort level is good enough to inspire me to go on a cross country roadtrip after my A’ level exams.

Anyway, I have to admit that Unicorn is better for touring. As you can see from the pictures I have carried out a few modifications. The leg guard and the looking glass were removed to help me slip through the tiniest of gaps. I have removed the mudguard, chain cover, grab-rail and saree guard to give it a sporty look. The removal of chain cover does shorten the life span of the chain and sprocket and no mudguard means that my pillon gets sprayed with mud when I ride after rain. As for the removed grab rail and saree guard I only take pillons who knows how to sit properly on a bike and girls are only allowed when they have their jeans on.

The loud exhaust looks and sounds cooler than the silencer but I do have to bribe cops from time to time. I have got much more outrageous ideas for modifications but can’t carry them out due to the shortage of money. Even after 15 months whenever I open my garage door a smile slowly creeps into the corner of my face. It is that moment which adds meaning to all the little battles I have won for my bike. I was born a racer and this bike inspires me to stay that way. Life is not measured by the number of breathes you take it is the moments that take your breathe away.

No matter what kind of day I have all I need to do is twist the throttle to leave everything behind and enter the high adrenaline world of street racing. After a lot of thought I have named my bike Maniac because it rides like one. 🙂