Much before Honda Stunner FI and TVS RTR FI came and the Pulsar 220 DTS-FI was still in the making, Hero Honda came up with a bold decision and took the initiative to inject FI into one of its successful models, The Hero Honda Glamour. Glamour was launched as India’s first Fuel Injected Motorcycle. 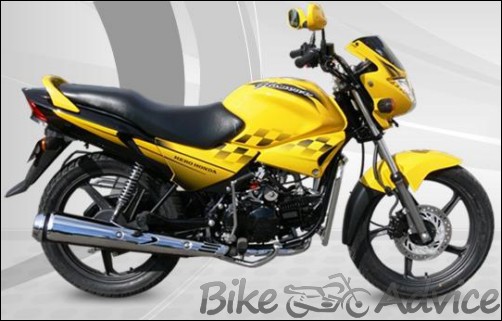 Prior to the Fuel Injected Glamour Hero Honda managed to sell many Glamour motorcycles along with Super Splendor which also had same engine. To start with the review of their Glamorous “Glamour” is a decent bike to ride with one of the shortest wheelbase (1265mm) around. It has a comfortable riding position and a 240mm front disc brake gives you a feeling of a ‘Perfect Bite’ on road.

The step up pillion seat is comfortable as well as ergonomic for its segment. The front does tend to slide when pushed but it’s a characteristic peculiar to damp surfaces. The MRF rubber does its job well. You won’t have much to complain about the bikes riding comforts though. One of the major disappointments you come across on this bike is that its 124.88cc produces only 9bhp of power. There are many other 125cc bikes around who can easily deliver more power. The bike picks up 0-60kmph in about a lazy 7.4seconds flat. Let’s take a small look at the Glamour:

Styling: Many people would agree to this fact that Hero Honda Glamour is slightly over-styled. Its scintillating body graphics along with dazzling chequered flag doesn’t match with this, otherwise its simple looking bike. Black rear view mirrors would have been better than the existing body colored ones. Here everything is made to add more appeal to glamour which looks full of life. The extended tank scoops looks like a sophisticated ‘Engine Cooler’ but on closer inspection you would notice a key lock and end up realizing it’s simply a locker. We still wonder if there was any need of providing that Dynamic Red body frame, which simply makes us think of “Trellis Frame”. The bike features clear lens indicators, a body colored Grab rails and an all black engine.

The Chrome ringed speedometer looks pretty nice with a fiery red background which also shows economy zone, while the FI model has not so inspiring green background. Along with Black alloy wheels, silencer is also painted black. But what makes Hero Honda customers happy is its high dependability and low maintenance cost. Hero Honda Glamour is capable of giving you overall mileage of around 75kmpl. The figure you get may vary due to individual riding habits. The ASFS sticker on the body stands for Advanced Swirl flow Induction system. The company claims this new age engine creates a perfect swirling motion of air and fuel mixture inside the combustion chamber for faster and improved burning to extract the best out of each drop of fuel resulting in better fuel economy and lowers emissions.

Glamour FI : It looks like in a rush to introduce Fuel Injection technology first in the market; they probably missed in utilizing this technology to the full extent. So the biggest secret of Glamour FI comes in a disappointing fact that there is no increase in overall power output of the vehicle. It also produces 9bhp power and shares all other technical specifications with its carbureted version. Moreover the FI looks 95% similar to old Glamour leaving behind only the PGM-FI logo for its identification. Another secret is that for some reasons the Glamour FI has a smaller fuel tank. Also the analogue fuel gauge becomes digital here. All that FI model gives is a reduced emission and increases mileage by about 5kmpl. Advantages of Glamour FI Over the Conventional One – Firstly the technology itself, PGM-FI or programmed fuel Injection consists set of five sensors that monitors the engine’s operating conditions and keeps a close watch on instaneous air entering the manifold, the engine oil temperature, temp. Of air intake, the position of throttle response and the angle of the crankshaft.

Data are then interpreted by the ECU while calculates the ideal amount of fuel to be injected to optimize the air-to-fuel ratio. The result is excellent drivability and improved fuel efficiency. Moreover the FI version lowers hydrocarbon emissions by almost a third. So ultimately you would take pride in doing your bit to save the environment. Second, the bike has a RTMI (Real Time mileage indicator) which displays average mileage for last ten seconds based on quantity of fuel consumed and distance travelled. So, anybody who questions this bike’s fuel efficiency is in for a big surprise. Thirdly the bike employs a unique safety device known as Bank Angle sensor that automatically cuts off the ignition and fuel supply if the bike tips over a specified angle. It’s an excellent safety feature, one that is also seen on many other bikes. Bajaj Pulsar 220 DTS-FI and Honda stunner-FI is an example to that. Last but not the least as all the FI bikes have, Glamour also has a malfunction indicator lamp. Any malfunctioning in its PGM-FI system and you will be the first to know it through a red FI lamp plotted just above the LCD fuel gauge.

Verdict: Well the bike has a lot to offer in terms of refinement and fuel efficiency, but there is nothing it can boast of. The new age LCD speedometers and LED’s are nowhere to be seen. So that clearly makes Glamour due for an upgrade. Hero Honda’s three years breakthrough warranty means a complete peace of mind in terms of ownership. The main question is whether to go for the FI or not.

The Fi technology has not gone well at all so far. The RTR-Fi suffered huge setbacks and 220 DTS-Fi is no more available. When approached dealers, even they admitted Fi version needs high level of periodic Maintenance and are not at all a successful bike. Agreed that the FI provides unmatched fuel efficiency, but it comes at an ‘unbearable price’ too. In fact Fi is priced dangerously close to other 150cc bikes in the market. So that leaves only its low emissions capability to its rescue. But then, who would spend as much as Rs10, 000 more just to that.