Hi Everyone! This is my first ever review of a bike in a website. As I am a regular reader of BikeAdvice.in, I have decided to publish it here. I thank BikeAdvice million times for all of the valuable reviews and the ownership experiences. 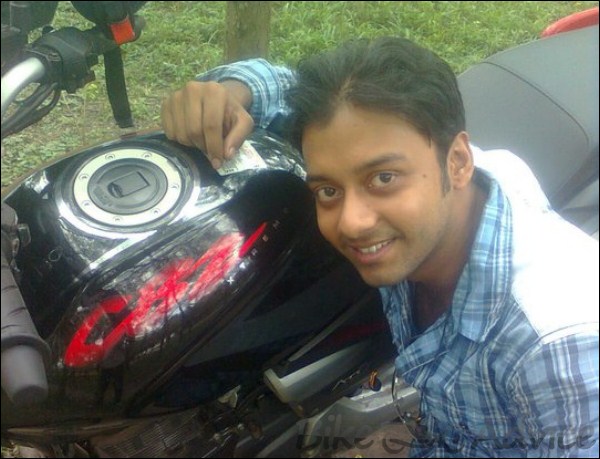 Let me tell all of you that my review would be based on my feeling, observations and it may be biased due to my love that I have for my bike. Here goes my review.

Year 2004: I got my Bajaj Caliber 115 was really amazed by it for its acceleration because displacement was only 110CC but delivered power like a 125CC bike. It was may be due to its engine producing 9 BHP and had a top speed of 100KMPH.

Year 2006: Sold my bike due to some unavoidable circumstances.

Year 2010: After waiting for almost 4 years finally bought another bike and that is none other than CBZ- Xtreme. Well, I live in Bangladesh & bikes over 150CC are not legally available here. I had the following choices only:

After researching for almost 6 months & test riding all of them I selected Hero Honda CBZ Xtreme. Well many of you may ask why didn’t you select other options? Here goes my answer but it’s just my personal opinion and no offends to anyone. 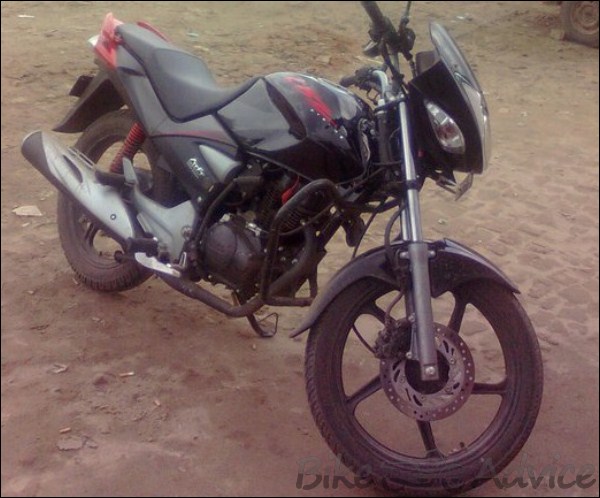 My first choice was Hunk but I didn’t go for it because I felt pronounced vibrations after crossing 6000rpm and it was very hard to take it to 9000rpm. I really like Honda Unicorn because of its super refined mill; its smoothness just blows me away.

But I don’t like its styling. About Apache 150, it was not refined & it produces the least power among all of the above. RTR 160, it has got great power but sporty riding position has never been to my liking because I go for long trips every now and then and the vibration issues.
About the FZ? Well it’s a real fun to ride but because of the mileage factor, pillion comfort and stressed engine after crossing 90kmph I removed it from my list. R15 has always been my favorite but I just can’t afford it.

About Pulsar? Reliability, maintenance is a great factor in case of Bajaj and also never liked the handling, feels too heavy. So finally settled down for CBZ Xtreme & this are the following reasons why…

To me it’s a handsome looking bike. Many of you would disagree but give it a close look and trust me you won’t hate it at least. Head lamp looks conventional and its nothing new compared to the earlier. 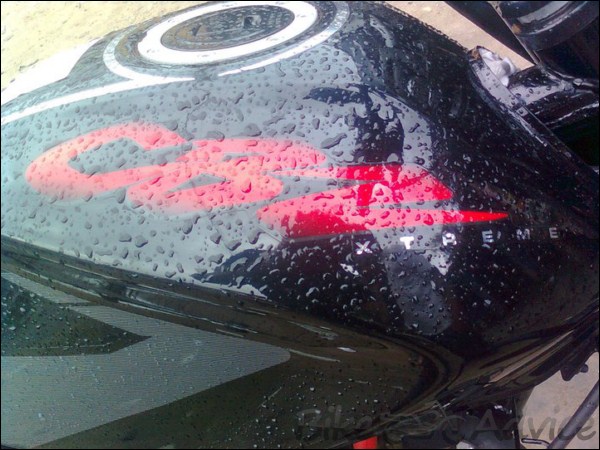 CBZ, But I like it very much didn’t like the first generation Hero Honda CBZ Xtreme’s headlamp though. Except for the headlamp I have to admit the rest of the bike looks amazing. I too personally don’t like the front indicators merging with the headlamp; it would have looked good if it were externally set.

To me the rear LED backlight and indicators are just awesome. I also like the silencer; exceptional split grab rail and the handlebar with glossy finish. There is one very big letdown and that is the fuel knob, it is just too simple hate it. 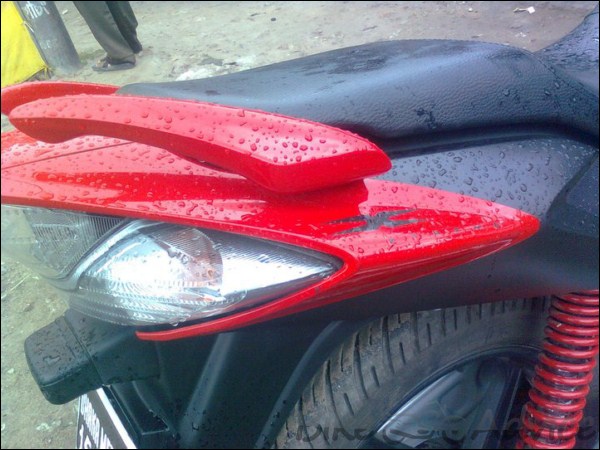 Fit and finish is typical Hero Honda class finish, Console looks good and ok not anything amazing, though I don’t mind being all analogue but always like analogue RPM meter with digital speedometer like the one used in RTR’s or Dazzler’s.

My Hero Honda CBZ Xtreme has clocked 2200kms till now. Till my first 1000kms gear shifting was hard but not too hard, finding neutral was easy. But after 1000kms gear shifting has become smooth but certainly not as smooth & slick as the FZ’s. It doesn’t mean gear shifting is worst; it’s very good and won’t irritate you no matter how you use it but don’t think its silent you can hear a sound when you shift gears. 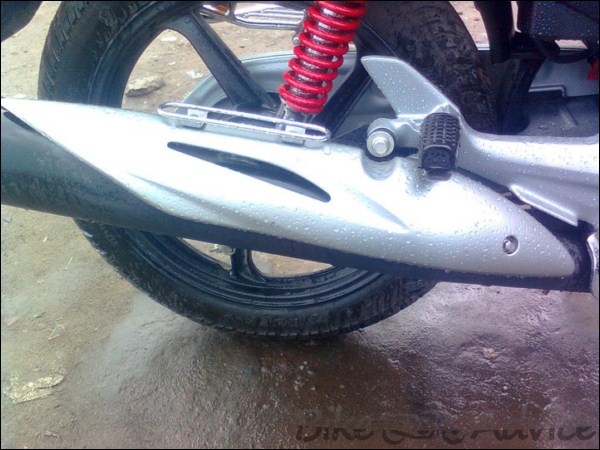 Front disc brake does its job well but not exceptionally like FZ’s front disk or RTR’s roto petal disk. I wish if it had more bite but there’s one thing that it doesn’t lock up the wheels easily so less skidding. Front disc brake is just ok and rear drum brake is good and provides adequate stopping power.

The comfort level I have found in this bike is just awesome. The wide seat provides enough space and it’s not too soft and not too hard thus providing you great touring experience. I have done four 250 trip till now and never have any back ache or any uncomfortable experience. The seating position also aids in this section, it is just too different missing in any other bike (at least I felt so) with rear set foot pegs and it really amazes me. It is such that you can drive by keeping your back straight but you can easily crouch too. 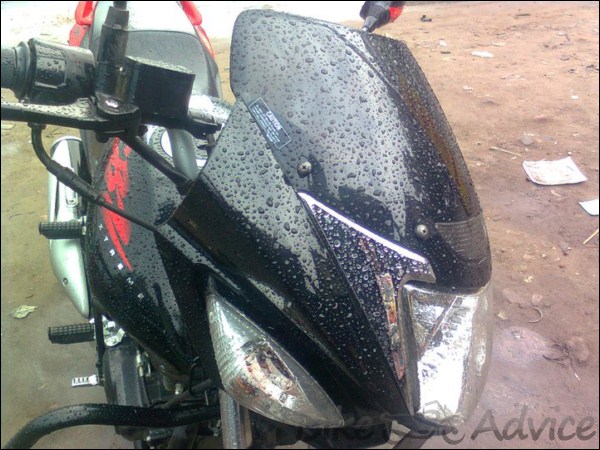 You are just too comfortable on it and can enjoy every seconds riding it that’s my guarantee to you, but short people may have hard time riding it. Handling in one word is fantastic, bike may look big and heavy (actually it is, carb weight 143kg) but once you ride it all of it vanishes in an instant. When I first rode it I said to myself “why is it so light?” Cornering is fun, to me its corner demon sometimes I think it can read my mind.

Trust me in heavy traffic or highway Hero Honda CBZ Xtreme is a gem of its own. Its handling at 100KMPH is very much agile and easy. The stock MRF Tyres provide excellent grip but not the best, the rear 100 section tyre may look skinny to some people but it does its job quite well. Some may complain about the rear shock absorbers but it’s not as severe as they say. The stock setup is stiff for better handling at high speed though I found it too soft so set it one step stiffer.

This suspension is adjustable and those who are having tough time thinking why it is too hard then just set it softer and you’ll have a comparable better suspension like the gas charged suspension but not like unicorn’s mono suspension. I don’t think you won’t like the stock setting of the rear suspension if you are riding solo and want better stability at high speed but if you want pillion rider’s comfort then you have to set it softer.

But if the pillion is heavy then don’t bother doing anything, if you cross any speed breakers the suspensions tend to hit the threshold and you will hear a THUD kind of sound though people say this problem vanishes after some thousand kilometers. CBZ Xtreme’s small turning radius also helps in better handling such as taking U turn and don’t worry for your pillion; the big rear seat will take care of it.

I always wanted a bike which will have smoothness along with great power delivery and CBZ Xtreme’s unicorn derived retuned motor provides just what I wished for. Its smoothness is not like the unicorn but enough to make you smile. 12.8NM Torque and 14.4PS of power delivery is smooth through the available rev ranges.

To me the exhaust note is like music to my ears whenever I drive my bike I listen to it closely. Take it to red line in each gear and it will transform the music into excellent roar. Want to rip it? It goes to 9K RPM at ease and hits 10K RPM but engine becomes harsh after 8K rpm but remains most of its smoothness. It can run at 30KMPH at 5th gear without any hiccups but not at 20KMPH as many would say. 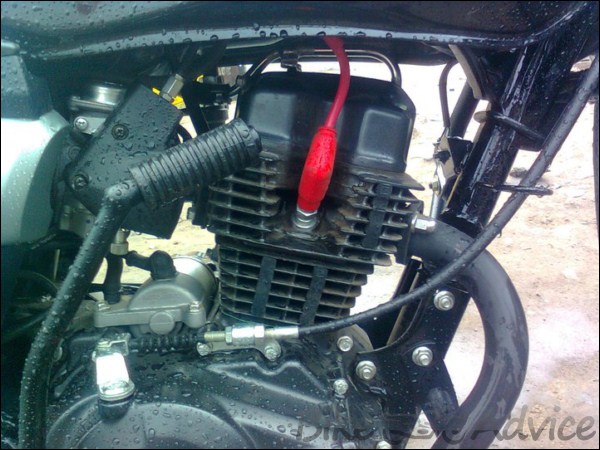 I won’t say it needs lesser gear shifts but I will say it is happy if you take it over 3000rpm and you know it doesn’t have mammoth torque like the FZ. Throttle response is amazing feels like this rush won’t end. You’ll definitely have adrenaline rush if you take it from 5k rpm to 8.5k rpm. I won’t say it doesn’t have vibrations, it does have vibrations at the range of 65-75kmph but after then it vanishes but the vibration is so much negligible.

You are definitely going to have great touring experience without any Boredom or tiredness. I hit a top whack of 127KMPH after I completed my run-in and it goes to 100kmph really fast, you won’t notice it until you look at the speedometer. 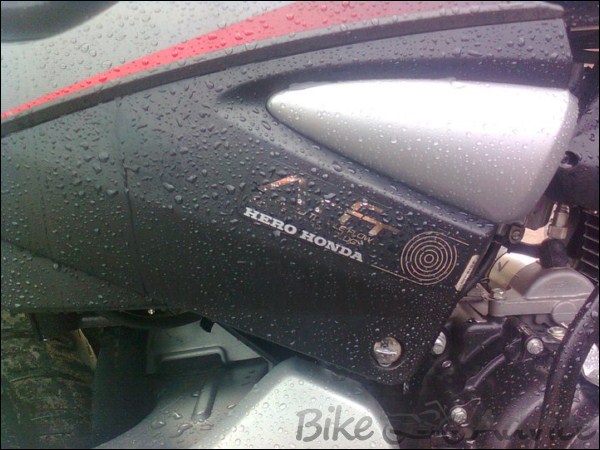 At high speed there’s a slight vibration only at handle bars and foot pegs but not anything to disturb your enjoyable riding. Sorry but I just can’t find anything wrong with this engine. Don’t worry if any bike overtakes you, the one who overtakes you will enjoy vibrations, loud uncomfortable engine and exhaust note and you’ll enjoy the smoothness and comparatively less vibration free ride trust me and one more thing we all know how much reliable this engine is.

CBZ Xtreme is for those who want comfort smoothness Hero Honda’s reliability along with very good power delivery in a 150cc bike and not to mention it is a very low maintenance hassle free bike. About the mileage factor some may have to compromise with it knowing that its rivals are capable of giving more mileage but CBZ Xtreme’s overall features mentioned above can be compensated for this.

Though it’s been many years since the birth of this bike, it can still give a tough fight to its rivals. To me it’s a kind of all rounder it gives you everything but can’t do anything exceptionally. Many may want only raw power then there’s RTR many may want pure smoothness with reliability then there’s Unicorn many may want style & fun then there’s the FZ many may want all of them compressed in a single package then there is Hero Honda CBZ Xtreme.

Get yourself featured in BikeAdvice like Shahriar! Send your ownership review or article to bikeadvice.in@gmail.com with photos attached in the email and we will publish it.