Recent years have seen radical changes in the world of individual mobility, specifically in the conurbations, and the number of registrations has rocketed for virtually all individual transport concepts. However, the space available to traffic has not grown to the same extent, so individual mobility must come to terms with the new circumstances. 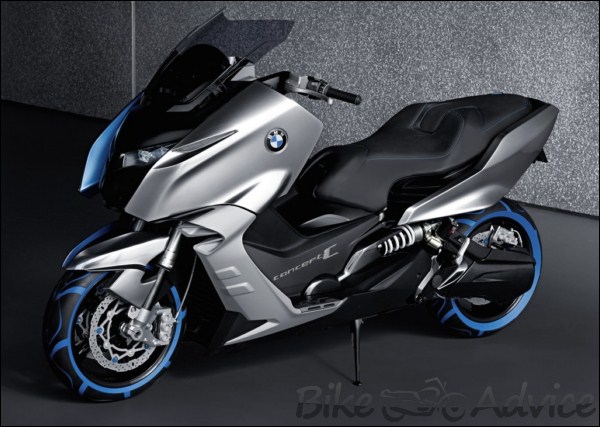 Against this background, BMW Motorrad will be expanding its present motorcycle adventure world to include the big scooter. This new product segment will first give rise to two innovative premium scooters with internal combustion engines.

The differing characteristics of this concept will appeal to a broad target group. In addition, some thought is being given to a future alternative drive with electric motor. 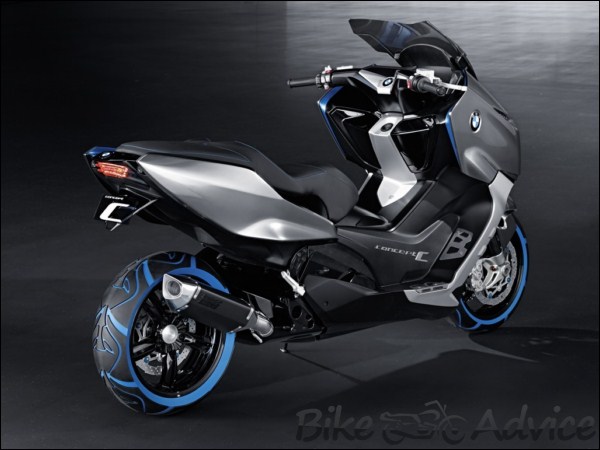 BMW Motorrad will be combining in these scooters the outstanding handling of the motorcycle with the particular agility and conceptual comfort of the scooter for the maximum experience of dynamic riding– a big scooter made by BMW Motorrad. There are plans to manufacture these future production vehicles at the BMW Motorrad plant in Berlin. 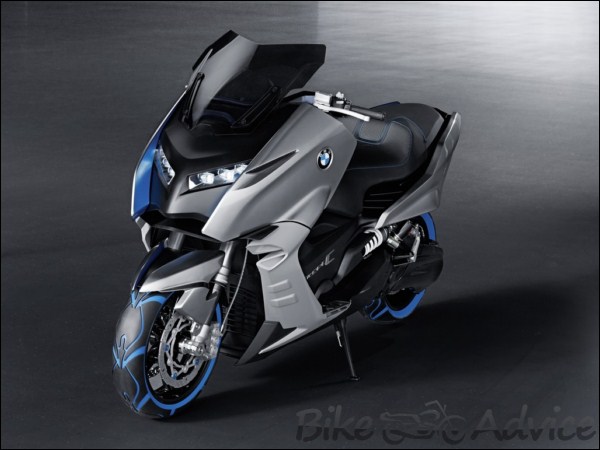 BMW Motorrad is continuing its strategy of strong and sustainable growth and so will be intensifying its traditional work in the enduro, touring, and sport touring fields. Following its successful entry to the super sport segment, BMW Motorrad will now be expanding its range yet again to include a highly promising business line. 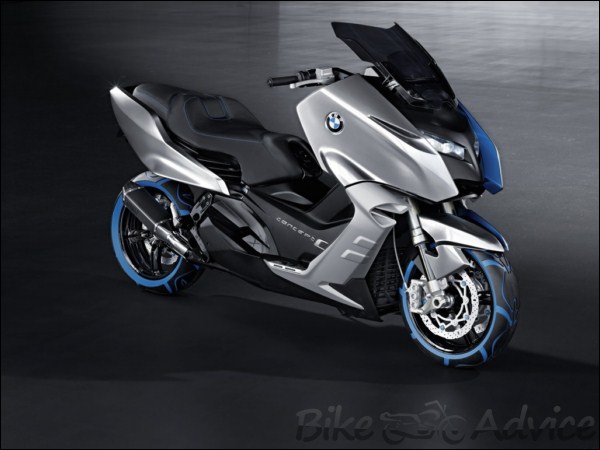 This path leads straight to the big scooter segment. These high displacement vehicles with dynamic handling characteristics have gained considerable popularity all over the world. Moreover, they present an interesting alternative to returnees who up to now were undecided about motorcycles after long periods of abstinence.

New ideas and concepts on the subject of two-wheeled mobility are a decades old tradition at BMW Motorrad. Countless times, concept studies and drafts have been presented that reflect the power of innovation and future orientation of BMW Motorrad. 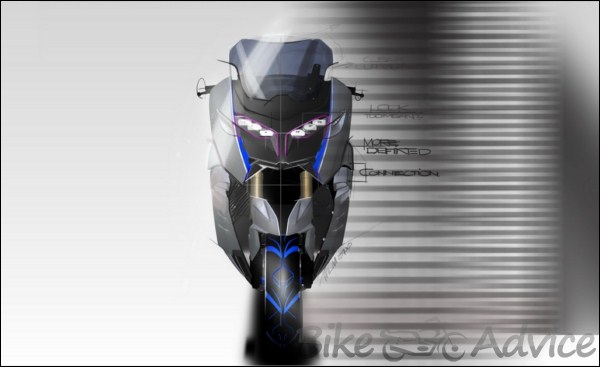 With its Concept C study, BMW Motorrad is yet again embarking on a new path and demonstrating a fascinating mobility option for the future. Here, C stands for “commuter”. Particularly in view of the traffic development in urban areas, it presents the prospect of an innovative, sporty big scooter for the future premium segment. 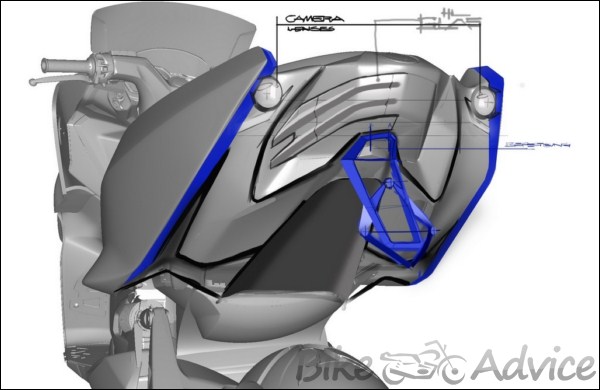 As usual at BMW Motorrad, there is more to this study than just an attempt to present a big scooter for the highest demands. Rather, the designers and engineers of BMW Motorrad focused above all on the emotive component in addition to the technical function and quality– and the thrill from the very first moment on.

When unveiling its Concept C at EICMA in Milan, BMW Motorrad will be directing the maximum possible emotion to its interpretation of this subject, which will bear witness to the primary claims of maximum, all round functionality. 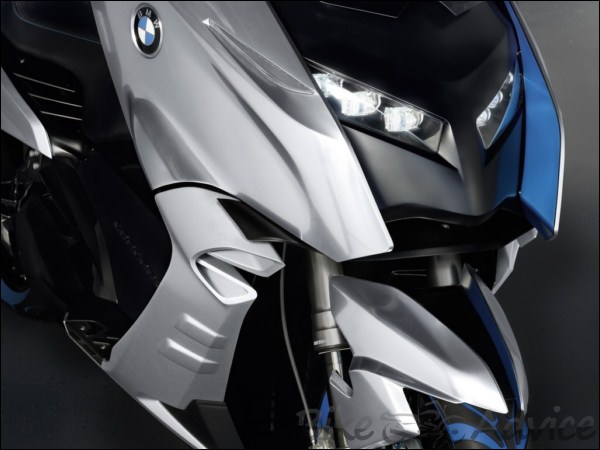 Concept C as a vision of the big scooter is immediately recognizable as a member of thy lines and colour scheme, Concept C has ventured on a new, much more sporty and dynamic path. The body lines sweeping up to the vehicle’s rear underscores this big scooter’s active riding character. The high rear section emphasizes the lightness and agility of Concept C’s powerful two-cylinder engine. Sportiness and dynamism are also underscored by the close cut, speeder-style windscreen. 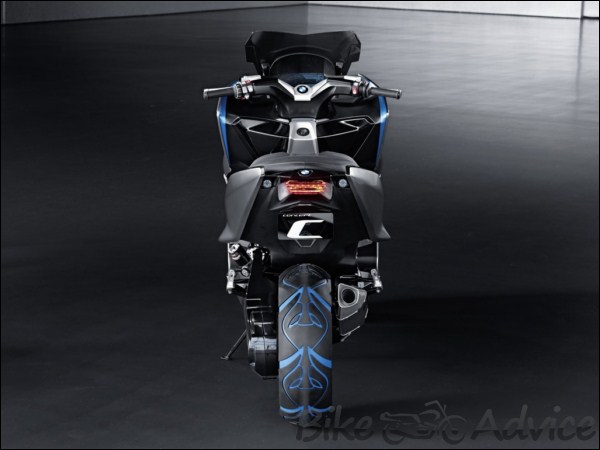 The functional side of this scooter is expressed in stylish design elements, such as the aluminum look of the bash plates with the air intake adopted from the BMW GS. 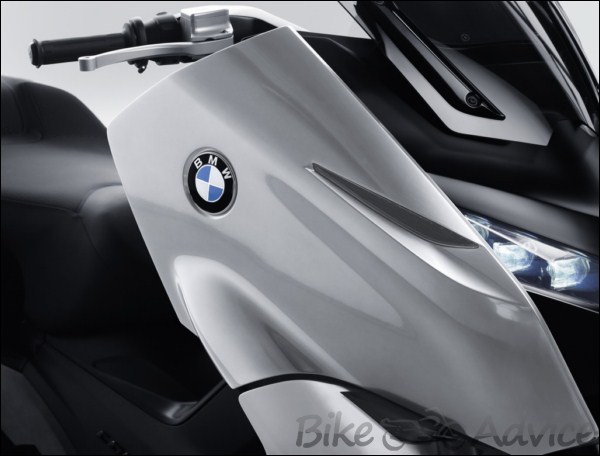 The black chromium of the suspension and frame parts form a thrilling, dynamic relationship with the aluminum chromium, silver, and blue paintwork of the body parts. In addition, the black satin sections present a high-contrast emphasis on the vehicle’s central area. This highly technical and high-quality elegance is borne further by finely worked details, such as the fuel tank cover reminiscent of aircraft and the short, sporty muffler. The visionary facet of Concept C is presented by the tires with flanks and treads of blue.

Concept C presents unusual and innovative solutions that offer a wide prospect of what in future can become reality in this segment. 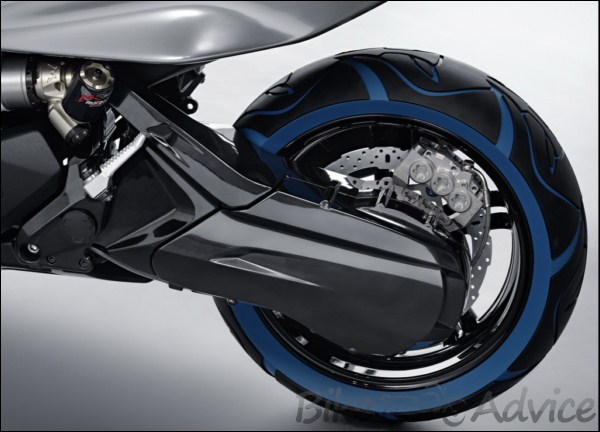 For instance, Concept C features a highly complex mono lever mechanism with hollowed-out shaft connected to a suspension strut visible from the outside. In this study, front-wheel control takes the form of an upside down fork. 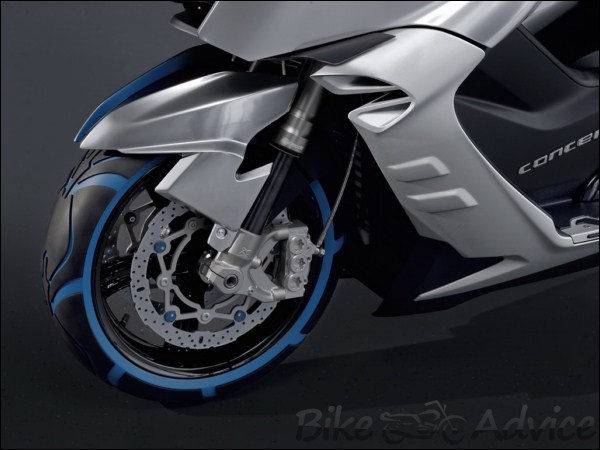 The stable twin disc brake at the front features two radial brake calipers that also underscore the dynamic sportiness of Concept C. In addition, the single disc brake at the rear and the BMW Motorrad ABS provide the maximum possible safety during braking manoeuvres. 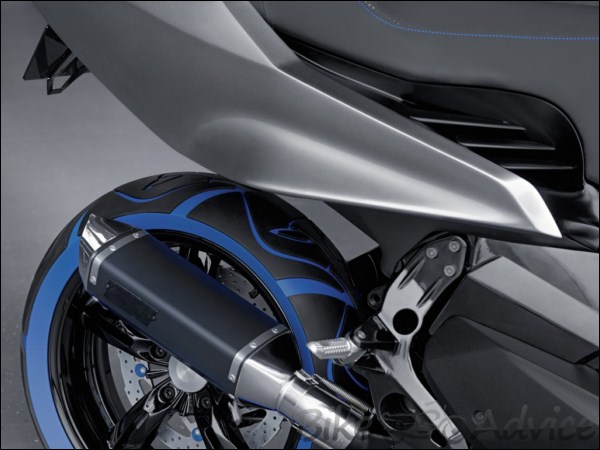 The dynamic and equally comfortable driving force behind Concept C is provided by a new, two-cylinder inline engine in conjunction with CVT (continuously variable transmission). Engine power, torque, and therefore performance will be moving towards the top of the segment. 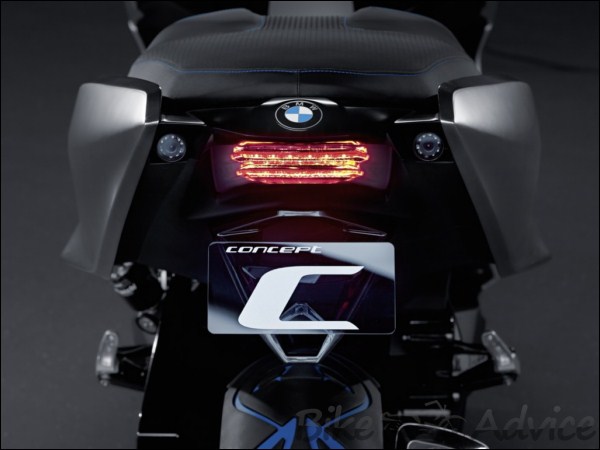 Light is cast on a more distant point in the future by the LED headlamp integrated into the face paneling. This future vision is also continued by the deliberate absence of conventional rear view mirrors, which will be replaced in Concept C with two video cameras in the rear. These record the area behind the vehicle and transfer the images to two LCD monitors in the cockpit within view of the rider. The road speed, engine speed, and other data appear on a third LCD display integrated at the centre of the cockpit. 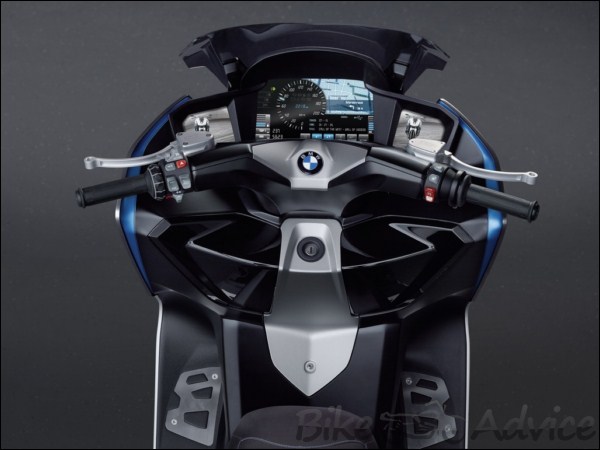 Concept C also testifies to thoughts and ideas extending beyond the actual vehicle. In line with the BMW Motorrad philosophy, a big scooter realised in the Concept C style will also come with a range of adequate rider equipment. In the best BMW Motorrad tradition, the development of a big scooter will also include a suitable stowage space concept.