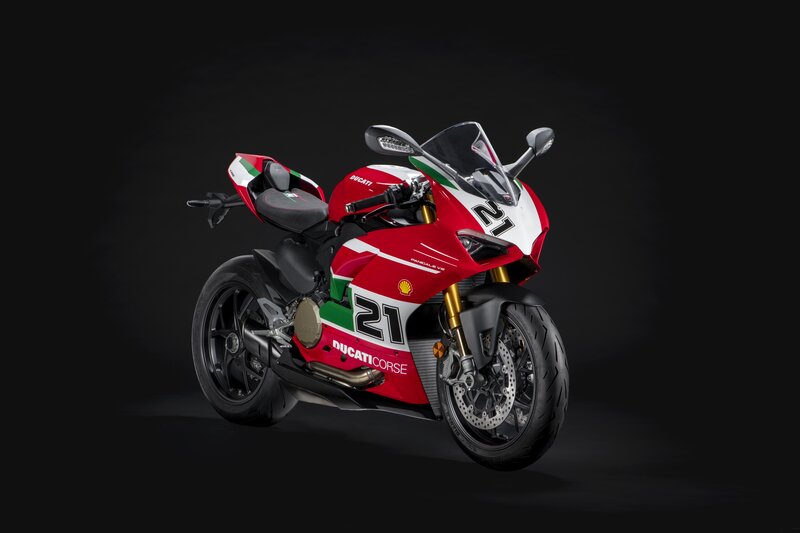 Ducati have brought the ‘Panigale V2 Troy Bayliss 1st Championship 20th Anniversary’ to our shores and are offering it in limited numbers at Rs. 21,30,000/- (ex-showroom, India).

The bike is based on the standard Ducati Panigale V2 sportsbike and is donning a dedicated livery that recalls the Ducati 996 R machine on which Troy Bayliss won his first title in 2001.

Bearing the legendary Bayliss’s ‘21’ racing number and Shell logo on the front and the sides, the special edition Panigale V2 is using Ducati Red as the main colour combined with the Green and the White in a tribute to the Italian spirit of the company. Completing the special look is the use of graphics directly inspired by the Ducati 996 R race machine which took Troy Bayliss to his first championship in 2001.

The fuel tank of the special edition Panigale V2 is sporting the reproduction of Troy Bayliss’ autograph while the billet aluminium triple clamp bears the name of the bike and the individual number out of the limited number of this special edition.

Looking beyond the livery, the special edition Panigale V2 Troy Bayliss is 3 kg lighter than the standard bike. This is accomplished by using a Li-ion battery, race bike-esque single-seater configuration, sports grips and carbon fibre & Titanium built silencer cover which reduces the overall heft of the bike.

One major change Ducati have brought to this special edition bike, and that is the use of Ohlins components in the suspension setup connected to its monocoque frame. They have used Ohlins’ NX30 forks in the front and TTX36 shocks in the rear to ‘guarantee maximum smoothness and best performance on the circuit’.

Mechanically, the bike remains the same, utilizing Ducati’s 955 cc, Superquadro, twin-cylinder engine, putting out 155 HP at 10,750 RPM and 104 Nm of torque at 9,000 RPM. The electronic package available on the bike, as standard, consists of Cornering ABS by Bosch, Quickshifter, Traction and Wheelie control and three riding modes – Race, Sport & Street.