Italian Bike Maker Ducati has big plans for the Indian market. Ducati recently launched the much hyped and awaited Diavel in India a couple of days back. With the launch of this monstrous looking machine, Ducati has expressed interest in capturing a market share of 30% in the power bike segment. Presently Ducati has its showrooms in the cities of Bangalore, Mumbai and Ahmedabad. But the bike maker is more likely to open up its exclusive showrooms in are Hyderabad, Chennai, Cochin, Pune, Chandigarh and Jaipur. 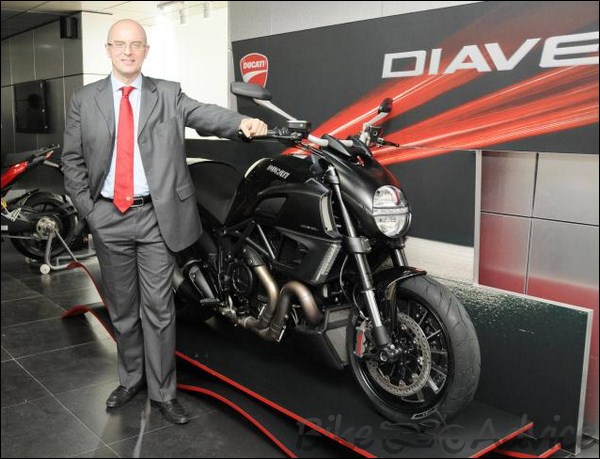 The good news is that these showrooms are more likely to be opened by the end of this present year. The Bangalore showroom which was the last to be opened had done almost 15 booking for the Ducati bikes. “We are looking at 200per cent growth year on year for the next two years till the market stabilizes,” Ashish Chordia, CEO Ducati India, Precision Motor India said.

The manufacturer will be facing competition from other majors which include BMW, HD, Aprilia, Kawasaki and even the Vyrus brand of motorcycles. Data shows that more than 50% of the buyers get a bike to their home by taking up a loan as this is a most preferred mode of buying rather than going for downcash payment.

The super bike segment which has bikes with a capacity of around 1000 cc and above sees around 35 sales every month according to industry watchers.