If ever you talk about classy sportsbikes, only a bloke would miss out on Ducatis. The Italian bike maker has carved a niche in the world market for the type of bikes they make, the 1098 and 1198 being the most admired and the flagship products among them. The overall racing dynamics along with some scintillating technology makes them a hot favorite in any type of conditions be it the mid traffic light GPs or the heavy duty power laden circuit racings. Recently, Ducati launched the first of its long list of 2010 models, a true race bred Italian stallion, the 848 Nicky Hayden Edition. This new middleweight sports bike has every little bit to enthrall the onlooker with its sheer beauty and have we even talked about the other bits! 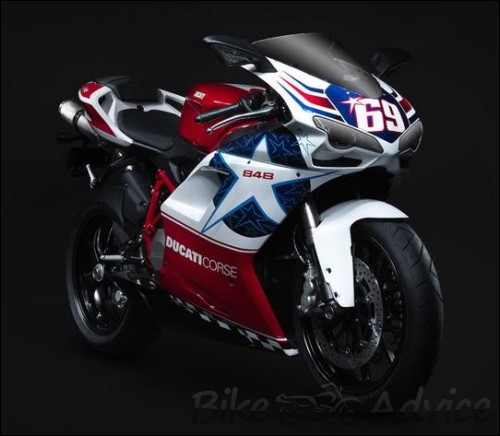 The highly advanced 848 is powered by a very potent 849.4cc liquid cooled, L- Twin Electronic Fuel Injected Desmodromic engine with 4 valves per cylinder. Ducati has worked on reducing the weight and have come up with a machine which weighs 369 lbs (168kgs) only which is 44 lbs (20 kg) lighter than its previous model and a whole 11 lbs lighter than the larger sibling 1098. The maniac machine produces an awesome 134 horses which scream on top of their voices at 10k rpm which is 30 percent more than the earlier model and a class leading 96Nm (9.8 kgm) of torque which bests at 8250 rpm. These figures on paper can vouch for the screaming performance this machine would boast of on real twisty tarmacs.

The engine draws inspiration from the bigger 1198 and has been developed with all the inputs from the experience of the Ducati’s racing department. The basic design guidelines remain similar to the 1198 with the same compact light weight cylinder and cylinder head layout. New extra lightweight cam belt tensioner pulleys also find their way onto this 2010 model which shave off weight and increase performance. This has enabled Ducati achieve a fantastic power to weight ratio on this rev hungry short stroke motor which even betters the 999. The bore is 94mm while the stroke is 61.2mm which means that the engine maintains the over square layout design so typical of high revving short stroke racing machines. The valve angle has been kept same as the bigger 1198 with the inlet valve measuring 39.5 mm and outlet valve 32mm in diameters. Ducati has ensured to use bi-metallic alloy which enhances the reliability and resistance at the same time reducing the all important ‘fat’ from the machine to enhance that extra miles the bike can gallop per hour on the speedo. The new model also sees the introduction of ‘Vacural casting’, a new technology for the construction of the engine crankcase which has saved an all important 3.5kg of weight. Vacural casting is a forced vacuum die casting method which ensures high precision in measurement and better ductility for the aluminum alloy. 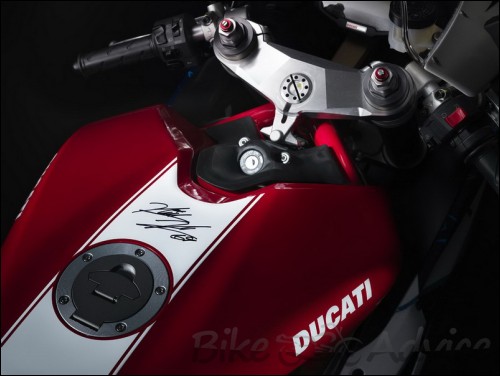 The bike uses the same type of oil cooler and coolant radiator as used in the bigger sibling 1198, with an increased surface area with lightweight heavy duty electric fan assemblies doing the duty of efficient cooling. The exhaust of the 1198 has been sweetly deafening at its power band and the 848 shares the same layout and technology featuring the Ducati trademark under-seat twin silencers which delivers that signature scream of the 90 degree L-Twin.

Having talked about the technical breakthroughs in the engine department let’s get to the control and chassis of the bike. The bike sports M4 calipers which use four 32mm pistons and two radial mounted pads which work on the two massive 320mm discs upfront along with a rear disc setup as well which ensures pin point stopping under any sort of speeds. The front sports a 120/70 spec 17 inch tyre with the rear doing with a gigantic 180/55 spec one which keeps the bike firmly grounded under any type of tarmac and speed. The Y shaped alloy wheels have also been designed to keep weight at the minimal. The Trellis frame of the bike is developed as a simplified tube layout featuring main section tubes increased in diameter to 34mm from the earlier 28mm whereas the thickness has been reduced to 1.5mm from the previous 2mm which, ultimately, increases 14 percent rigidity of the frame saving the bike of an all important 1.5 kilograms of weight. As has been the tradition with the Ducati superbikes, the 848 also sports a single sided swingarm which looks fantabulous at the same time being functionally very effective. The bike sports Showa monoshock at the rear and adjustable 43mm Showa forks at the front which are track tuned for superb road cornering and immaculate grip.

On the electronics and instrumentation front the bike takes you to a new fantasy world. The 2010 model 848 features LED backlighting for enhanced visibility especially during nights. The digital dashboard which is a special inspiration from the Motogp features a speedometer, tachometer, lap time on the stopwatch, clock, air temperature, coolant temperature, battery voltage, odometer, tripmeter, fuel gauge, maintenance indicator, neutral arrows, projector beams, oil pressure, immobilizer phewww…..! A buyer also has an option of DDA, (now whats that?) DDA is Ducati Data Analyser which analyses the performance of the bike after considering various details of the rider and other details like engine temperature, engine rpm, distance travelled, lap timings, vehicle speed etc. The bike also lets you select the perfect gear after calculating (internally) the vehicle speed and rpm. We just wonder when we, the Indians, will have the opportunity to ride these awesomely handsome superbly tech-laden and furiously fast machines and did I say affordably!

But Who is this Nicky Hayden?

Nicky Hayden is a professional motorcycle racer who was born in Kentucky in 1981. The guy was extremely passionate about bikes and at the age of 17 got his first factory ride with Honda Motorcycles. 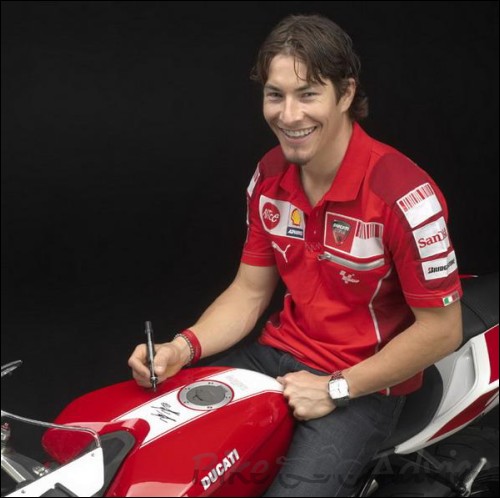 Nicky won his first Moto GP World Championship in 2006 and a million hearts! In 2002 he became the youngest AMA (American Motorcyclist Association) Superbike Champion after winning the Daytona 200 riding a Honda. After a lot of speculation, he joined Ducati leaving Honda in 2009. Suffering from a few chest and back injuries this year, Nicky did not have a very good year but the zeal in him hasn’t allowed him to go down. The guy has come a long way in his racing career and has become a force to reckon with!