In the world of premium bike makers there is always one name that stands out and that is Ducati. Ducati has had more than enough experience of producing bikes of great caliber thus making consumers and bike lovers crave for more. Recent news relates to the release of Ducati’s newest baby i.e.

Ducati 1199 which happens to be the most awaited international premium bike of 2011. Ducati 1199 is a super cool machine with lots of powerful features. Ducati 1199 is spied and we have bought the spy pictures especially for all our readers. Couple of times in the past there were speculations regarding this premium sports bike but this time the spy picture is caught on camera. 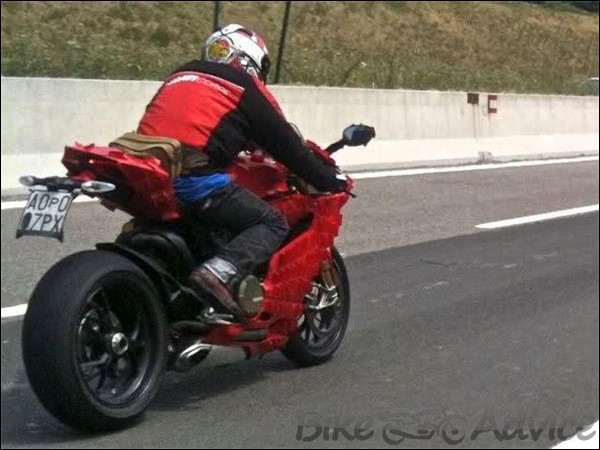 The spy picture reveals that the bike is a not very small and compact as was speculated previously and thus giving the rider a comfortable and spacious ride. As the image is captured from behind it can be clearly seen that the bike has got an underbelly exhaust like Ninja650R with a header pipe from the front cylinder making its way into the can (this will add to the torque of the bike). However the picture doesn’t give any clear sight of suspension which may mean that the suspension is placed on the left hand side.

The bike looks to be in great shape with all the styling and graphical part being taken care off. The tail end of the bike is sporty and thus it gives the bike that extra extension that one would normally expect in a sports bike. The speculations are also going on if the bike will sport a MotoGp derived stressed air box frame or the traditional trellis frame. All in all, the bike looks great in the picture and the only thing left for us is to wait and watch if Ducati delivers what it is promising.