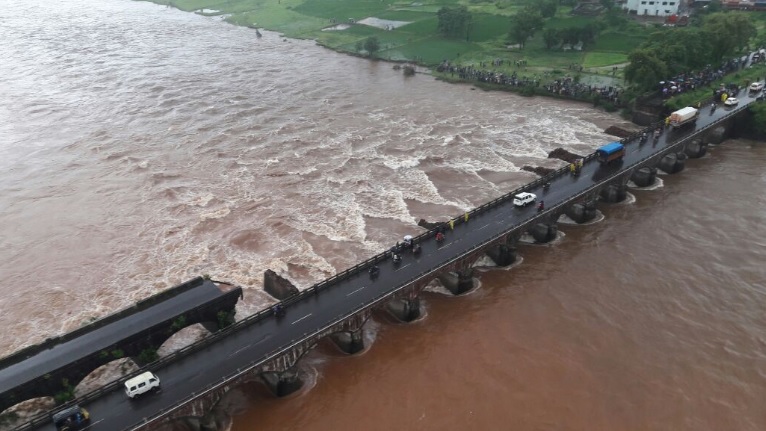 Update: Latest reports say that the death toll has increased to 11. Even the elite marine commandos are having trouble thanks to the strong current. Also words are coing in that experts from UK had warned the state government against the use of the bridge which had trees growing among the bricks. An NDRF boat had also capsized yesterday, members of which had to be rescued by a chopper!

Last night an incident took place in the country which has left a lot of people shaken. An old colonial era bridge collapsed into Savitri river in the Mumbai-Goa highway. The government has built a bridge parallel to it to carry traffic but several buses and cars still use the old bridge. Due to increased rainfall the flow of water had got raised both in terms of speed and volume. Two state government buses have been reported to be swept away!

At least 22 people have been reported missing which includes 2 drivers, two conductors and 18 passengers. Four teams of National Disaster Relief Force (NDRF) are at the site of accident. Twelve boats have been brought to conduct rescue operations along with two coast guard choppers and one all-weather heicopter from the Air Force. Sadly there is no way to be certain how many more vehicles were on the bridge when it collapsed.

Maharashtra’s revenue and PWD minister, Mr Chandrakant Patil has said that the bridge had been cleared in the month of May for use, but was set to be demolished in December. The opposition has demanded an enquiry into the incident along with resignation and charges filed against the minister. So far NDRF has pulled out two bodies. The buses had started from Rajapur and Jaigad respectively and were heading to Mumbai.

Just looking at these horrific pictures sends a shiver down one’s spine especially when so many of us have travelled on this road. Eye witnesses have also reported that two cars too were swept away when the bridge collapsed. The difficult weather condition has made it even more difficult to carry out rescue operations.