Its some good news for all the riders as the world renowned freestyle stunter Chris Pfeiffer revisits India for his upcoming Red Bull Chris Pfeiffer Street tour to be held from 21st March to 6th April. For those who do not know who the motorcyclist is; well Chris is a freestyle stunter and rider who have performed in many International shows and events. Chris is eventually known for evolving his own tricks and discovering new horizons in biking. 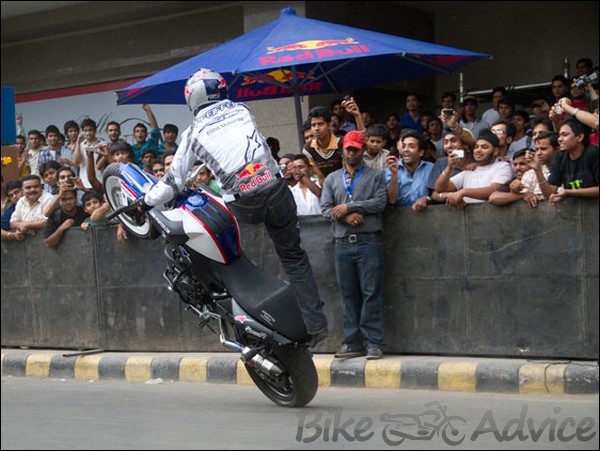 Now for the news; last year the Chris Pfeiffer tour was a grand success with over 35,000 people participating in to see Chris perform for the first time in India across 5 different states. Chris has recently bagged in the German open title and this time the Red Bull Chris Pfeiffer street Tour will be bigger, better and wilder than ever. Chris is here to visit 7 new venues in the country. He will perform at a total of 10 cities and as well do some shows in few places.

Well, Chris is a person who has been stunting for a decade now and winning all the stunting freestyle championships around the world. In fact he got his first bike at the age of 5 and since then there was no looking back. Sponsored by BMW, Chris is setting new benchmarks every now and then for the world to follow him.

The freestyle stunter will be riding custom made BMW F-800R and Beta Evo 300 4T trails motorcycle. The tour will be sponsored by Red Bull India and certainly it is going to be a thrill of an event. The Red Bull Chris Pfeiffer tour will be held in total 10 cities in India viz. Kolkata, Jaipur, Chandigarh, New Delhi, Ahmedabad, Mumbai, Pune, Bangalore, Coimbatore, Cochin from March 21st to April 6th 2011.