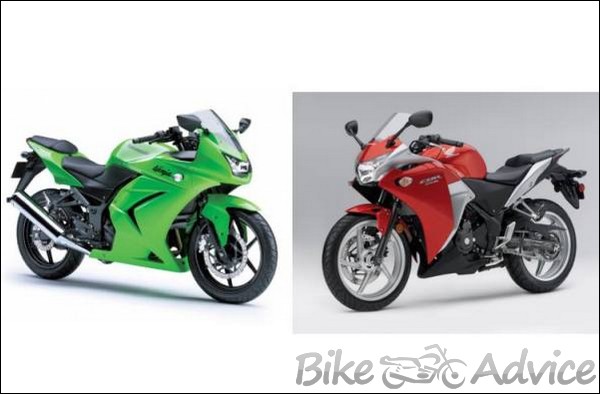 Let us first take a good look at their engines. The 2011 CBR 250R comes with a single cylinder. The engine has packed in pretty much of innovation like spiny cylinder outer liner, world’s first roller rocker arm on DOHC engine. The displacement of the engine is 250cc and sports 4 valve cylinder producing 25 Bhp at 8,500 rpm and 23 Nm at 7,000 rpm. The Ninja on the other had comes with a cylinder extra, as it is a parallel twin that displaces 250cc and is liquid cooled. Like the CBR, the Ninja’s 250cc engine is liquid cooled, uses four valves per cylinder driven by a DOHC layout. The bike is capable of producing 32Bhp of power at 11,000 rpm and 22Nm at 9500rpm.

Well, the MCN road test seem to portray an altogether different picture of CBR 250R. Many of the riders would think see CBR as a sports cum street bike but the test results show some radically different stats. The road test lay out that Ninja stands out as far as the speed is concerned. Ninja beats CBR comprehensively by 5 Kph as far as the top speed. Apart from top speed there was not any other area where Ninja really outclassed CBR. To sum up, Ninja ruled the top speed criteria while the other areas are kind of dominated by CBR. Take a look at the performance figures of both the bikes below 🙂 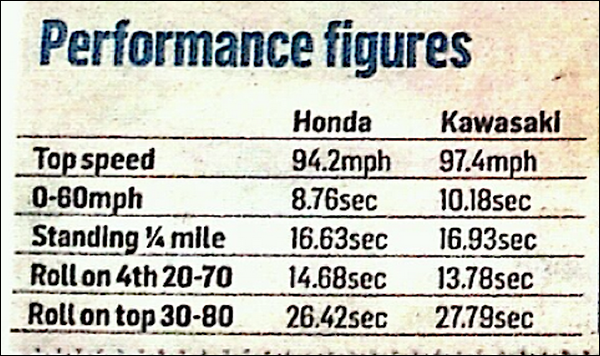 The other aspects of road test seemed to be ruled by the CBR because of its torquier engine that makes it easier to ride than its peer. In every aspect, including the roll-on timings, the CBR250R noses ahead of the Ninja. The road test tested both the bikes on various criteria like top speed, 0 to 60mph and roll ons. Also an important factor that will lead to increased sale of CBR is its price. Overall, the MCN road test lay out that CBR250R is mostly faster than Kawasaki Ninja 250R.