“Re-Engineered, Re-Designed, Re-Vitalized” as Royal Enfield calls its new offering, the Bullet Electra which now comes with Twin Spark Unit Construction Engine (UCE). This step comes after a long wait from Royal Enfield and its fans and definitely had them have the final laugh. This move from the Chennai based company ensures that all the models in the current lineup use the much acclaimed UCE. Before this move Electra was the only model which used the traditional cast iron engine. 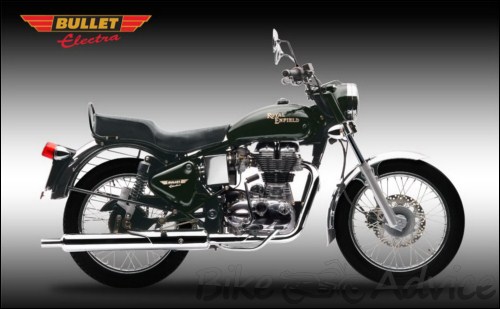 Basic designing of the new variant has been kept the same with contemporary lines flowing everywhere. The retro sexual looks which is a trademark Enfield has been carried over and one has to look through the lenses to find changes apart from the distinct looking engine. The new Electra will use the same engine which does duty on the current Thunderbird Twinspark and the very recently launched Classic 350. On similar lines, the single cylinder air cooled 346cc twinspark motor develops 28Nm (@4k rpm) of mammoth torque and a handsome power output of 20PS which peaks at just 5250 rpm with the carburetion duties done by a bigger 29mm UCAL BS 29 carb. A careful observation would reveal that though power has gone up by slightly less than 2PS (from the earlier 18.3PS), torque has gone down considerably by an all important 4Nm (from 32Nm) and also peaks at 1000rpm later (earlier was 32@3k rpm).

The new motor ensures a better and well sorted power output with much more smoothness in the drive especially at mid to higher rpms. The ride quality has been bettered along with better efficiency of every drop of fuel in turn making it a ‘Greener’ bike. Power spread all through the band has been made more linear and usable. Unfortunately, the real thump of the machine has been robbed to an extent and in place a subtle and quieter note takes place from the exhaust. The wheelbase has remained same at 1370mm but the overall dimensions have been altered – 20mm increase in length, 60mm gain in breadth and 40mm increment in height. Ground clearance has also been left unchanged at 140mm which is a slight worry. Saddle height stands at 800mm from the ground. Both the tires are 3.25 * 19” with the front bearing a large 280mm Hydraulic Disc and rear doing duty by 153mm drum brakes.

Laden with these latest changes, Royal Enfield has also increased the price of the bike by almost 8k and the bike now retails at 1.09 lakh INR (On road Pune). The bike would be available in three colors: Red. Black and Grey with the red standing out from the rest. How are the changes accepted by the larger base has to be seen in due time but recent developments from the company does give us a glimpse of the seriousness they are taking our market with.