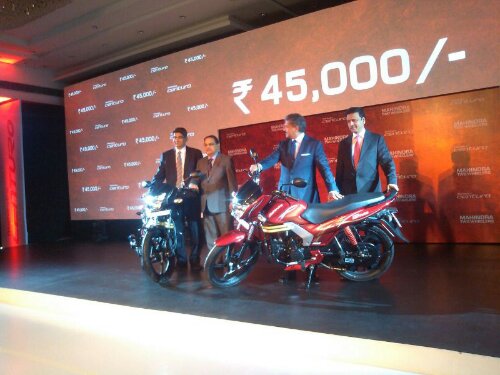 We are here at the gorgeous Pink City to witness a new entrant as it unfolds itself; a new entrant to one of the toughest segments in Motown. Ravaged by surging fuel prices as well as a balooning inflation, this segment has many old, established satraps which will make every move tough for this new entrant. Pricing will be the cornerstone of the success for this new entrant; it already has set the ball in the court of the older, established ones by boasting of some innovative, never-really-found-in-this-segment features.

Will this new entrant be able to thrive in the murky waters? Will Mahindra Centuro be able to draw first blood??

Read on and keep refreshing this page as we keep bringing the fresh news for you. It’s all happening here at the moment at The Marriott in Jaipur!!

Mahindra Two Wheelers Limited is the two-wheeler arm of the corporate giant Mahindra and Mahindra. They have been around in the two-wheeled arena for sometime with their Power Scooter range of Rodeo and Duro. They even had a motorcycle named as the Stallio, but we are sure they would like to forget about it and move ahead!! Nevertheless, Mahindra needs to build some spunk to break the shackles and move into a higher orbit.

With the Centuro, they are aiming at exactly that!!

Keep tuned to us as we bring the latest updates.

Live Update Section
Mr. Anand Mahindra has himself flown down to Jaipur, which definitely indicates that Mahindra is betting big on the Centuro. They have gifted it with a catchy tagline, “It’s Great to be Me!”. We were also shown the official TVC that will be aired from 5th of this month.

Meanwhile, Mahindra just spilled the beans on their future plans. They are about to launch…hold your breath…as many as 10 new products !! Safely expect an average of 1 product unveiling per quarter…woah !! That’s ambitious !!!

We have the latest word from The Marriott in Jaipur, and we are extremely delighted to inform you that Mahindra has unveiled the Centuro at an unbelievable price of 45000/- INR (Ex-Showroom Delhi) for the fully loaded trim. 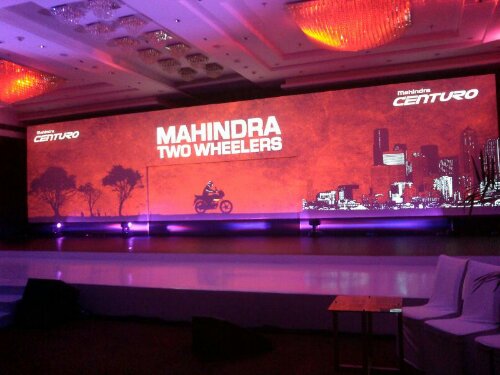 Unique features of the Mahindra Centuro :-

Mahindra Two Wheelers Limited definitely calls the shots when it comes to introducing nifty-yet-ground breaking features. After all, it was the Mahindra Rodeo that boasted of a segment-first, fully-digitised console.

With the Centuro, Mahindra seems to carry off from exactly where they left the Rodeo at. In fact, they have upped the ante!! Here’s a list of what you will are assured of if you bet your money on the Mahindra Centuro :-

These features are definitely never-really-heard-of in this segment, and it definitely lends the new entrant Centuro a lot of maneuvering space when it comes to battling it out with the old satraps who have a vice-like grip on this segment.

Moolah Matters : The Pricing of the Mahindra Centuro

As we had stressed upon earlier, Mahindra Centuro does undoubtedly carry some really high stakes in the form of a dominant styling as well quite a few useful trinkets. However, it still has that tag of a Rookie hanging from its neck; it is an untested bike!!

To fend off the threats from the old timers, Mahindra Two-Wheelers had to price this product aggressively. We are delighted to inform you that Mahindra has announced a price tag of 45000 /- INR (Ex-Showroom Delhi) for the Mahindra Centuro!!

So, are heading over to the nearest Mahindra Showroom??

We have already ridden the bike and will be sharing its first ride review shortly! Keep tuned

Keeway Confirms a Race Replica & 7 Other Launches This Year