We recently posted an exclusive post in BikeAdvice on TVS Motors planning to come up with a new scooter in order to catch up with the rise that the two wheeler segment is currently facing. We’d also posted a news very recently on TVS Motors getting back to their earlier variant of Apache RTR series as the company did not feel the thumbs up of customers with their new design and this holds too true for this particular model. 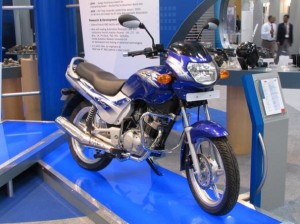 The recently launched bike from TVS – Phoenix seem to be the ray of hope for the company as of now. The company projects this model as a premium bike in the 125cc segment which is gaining momentum at par with the other segments out here in the market. While the Star series of bikes and the other series that the company manufactured fall under the basic commuter segment, the Phoenix and the Apache RTR series makes the brands of this company stand apart from the crowd.

Quite sometime back, when TVS parted ways with its Japanese counterpart – Suzuki, it is the Victor brand that unleashed the true potential of TVS Motors enabling the company to spread its wings as a totally indigenous company. The Victor brand managed to stay in the market for really long time and was initially endorsed by the Master Blaster – Sachin.

The Blue colored Victor was a true show stopper and raised many eyes at the time of its launch. The brands battled against the Hero Honda Splendor head on and to an extent enabled the entire company to gain huge market share at a time when its competitor – Hero Honda had technical tie ups with Honda and was emerging as world’s largest two wheeler manufacturer.

Over a period of time, the Victor brand got faded away with competition and the GLX125 was the last variant of Victor and owing to the poor response in the market, this model was also stopped for the Indian market.

Now that the company has panned to mark its strong foray in the 125cc segment where the Flame ditched the company in taking up to the next level, TVS is seriously planning to re – launch an upgraded variant of the Victor.

Our trusted source has expressed that the company is seriously giving thought to this brand and is at an initial stage of development. This would certainly be a 125cc bike and the launch of this model would totally be studied upon the market reach of Phoenix in the market as both of these would bear the same engine in the heart and hence would fall in the same segment as well.

Though the company is not too sure if it will make use of the same brand name or not; it is very obvious that TVS Motors would certainly give a special weightage to this name as the brand stays very close to its heart.

We expect this model to be launched by the festive season of this year – close to the end of 2013 as there needs no reason to come up with an all together new engine.

If the yet to be re – launched Victor wins the heart of many Indians, then this name is certainly gonna be too lucky to TVS Motors. Stay with us to get to know more about this Exclusive scoop.