Here we go again. Bajaj does a ‘classic’ again. It all seems that the 2001 era is back. We have seen it, now experience the exhilarating performance biking in the form of carbureted Pulsar 220.With the launch of this bike Bajaj has made it clear that they would not bow down to any better known manufacturers (read Yamahas). A few months back Yamaha did it with a technical supremacy in the name of R15, now Bajaj follows with some ‘never-seen-before-on-Indian-bikes’ performance figures. With this launch Bajaj has showcased their brilliant engineering prowess which can give tremors to any bigger known Japanese makers. 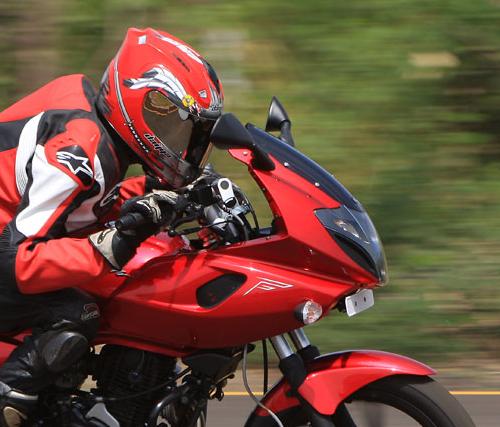 If we date back a few years; November 2001 was the month which probably would go down in the Indian history which marked the entry of ‘affordable performance’ bikes in India with the launch of classic Pulsars. Performance and technology doesn’t mean anything if they are not affordable. Bajaj has always been proactive in giving tremors to competitors and here comes a bigger one! Enter the new 2009 edition Pulsar 220 DTSi. Bajaj today launched the much hyped and probably the most awaited and an all important launch of this year-The biggest Pulsar from its stables, the Pulsar 220. This bike is much more than just a non-Fuel Injected version of the Pulsar 220 DTS-Fi. Read on for all the changes made to this bike which take it to a different league altogether.

Changes In The New Model:

Here we are talking about the most talked about feature of the bike, its performance. Bajaj calls this bike ‘The Fastest India’ and the bike’s traits lead us to believe every bit of it. Zero to sixty dash comes in lesser than 4 seconds! It is a huge more than half a second faster than its fuel injected sibling. Zero to hundred is achieved in around 11.5 seconds and this is a whooping two seconds faster to the DTS-Fi. Add to this the true top speed of the bike is reported at close to 140 kmph with the Speedo reading in excess of 145kmph. Now that’s fast by any standards and furious in Indian standards.

The bike lives upto its claim of being the fastest bike in the country and with a great margin, the brilliant tech-laden R15 included! Roll on times reported for DTSi are a tad slower than DTS-Fi, thanks to the latter’s more emphasis on low and mid range torque but flip the throttle and here you go astride the fastest Indian bike in production today in the country on the DTSi. With some scorching figures like this, not much is expected out of the mileage figures of this bike, but wait……! There is more to it than what seems evident. Expect the bike to return a handsome mileage of something in the range of 35-40 kmpl on real road conditons and this by any means are great figures. The engine roar has also been made gruntier and the self starter note also has a sweet muscular note to start with.

Along with all the above listings the bike gets all the typical pulsar goodies like the Exhaustec, lovely power and torque at all rpms, cheaper spare parts, projector headlamps, a 12W 9Ah maintenance free battery, dual horns, Wolf-eyed front semi fairing, rear Nitrox shock absorbers which do their job with near perfection.

With this bike, Bajaj has again produced a winner, more so with keeping the bike in direct competition to a newly-born Apache RTR 180, Yamaha YZF R15, Yamaha FZ series, Hero Honda Karizma. For sure, all the mentioned bikes will face the heat with the aggressive launch of this bike. This bike is set sure for turning the fortunes of Bajaj. Great move Bajaj! Let’s see how this bike fares in the market. If you are looking at a screaming performer at an affordable price, than there is no bike in the market which could match the practicality and “Value for Money –ness” of this bike. Go get this bike and burn the roads!