My name is Aditya Gupta and I live in New Delhi . I am 19 years old and currently perusing B.Tech in computer science from IP University. Like all other teenager’s I always wanted a two wheeler of my own so my father bought a Hero Honda Pleasure in 2007 for me but he himself knew that I will not stop till I get a good bike for myself as I had some of his genes ( My father used to be an avid biker himself and he owned a Bullet and the legendary Yamaha Rx100 ) . I started hunting for my first bike after my father’s approval in November 2009 . All I wanted was performance so I had initially short listed TVS Apache RTR 180 , Yamaha R15 and Bajaj Pulsar 180 . I had not consider Pulsar 220 DTS-I as I thought that that the bike would be too big for me . ( My height is around 5’7 and I weigh 70 kg ) . 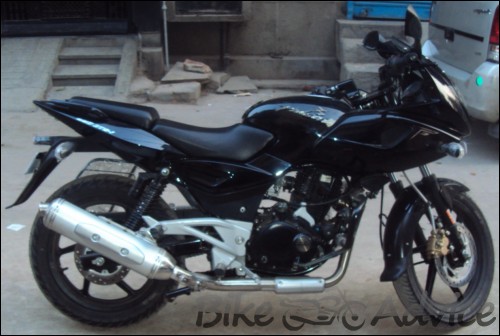 I liked the Bajaj Pulsar 180 since it delivered good performance and got those thicker rear tires , clip-ons and many more goodies borrowed from it’s bigger sibling.  Considering the TVS Apache RTR 180 the bike had great accelaration , mean riding posture and good looks . Additionally I loved the 0-60 timer and top speed recorder, both these things just compel you to ride fast to get the best timing so that you can pull out ur collar in front of your friends .

About the Yamaha R15, it’s the most advanced sports bike in India, Liquid cooled engine , monoshock suspension , DAISIL cylinder etc. justify its price tag of over 1lakh rupees . It was the only bike that came closest to Bajaj Pulsar 220 DTS-I in terms of performance . With all this oscillating in my mind, I went to the Bajaj showroom for a test drive of Pulsar 180 and saw a black Pulsar 220 DTS-I standing there . I just loved the big looks and the demonic front fairing and as soon as I sat on it , I knew that this is the bike i should go for no matter what . So, after convincing my father I finally booked a black Pulsar 220 on 12th January and rode it home on 14th January . After over two months of ownership I am ready to write about my experience .

LOOKS: This can vary from person to person but I just love how the Pulsar 220 looks . You can love it or hate it but you can’t ignore it on roads . The thick rear tire add muscle to the bike and black clip-ons are eye catching too . And regarding the other visual treats like half naked chain cover , step up seats , split grab rails , toe shifter etc , they have become quite common in performance bikes in India but still a treat . Heads turn in your direction automatically and this can be really embarrassing at times . I also got the white radium stripes on my bike after seeing them on my friend’s RTR . The projector headlamps provide great illumination and make you the king of roads at night with daylight like illumination. 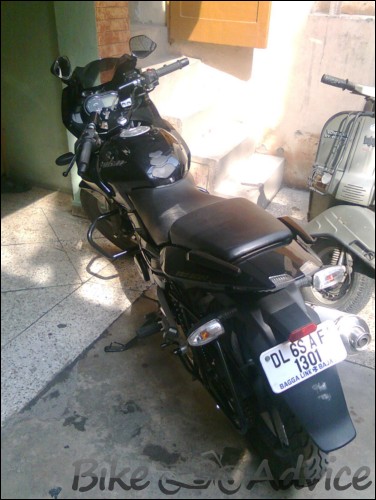 PERFORMANCE: This is where the men stand out from the boys . The performance is great and the adrenaline rush the bike gives you is just awesome ( trust me, you have to ride it to believe it ). The bike literally flies and snaps the 60kmph mark in mere 4 seconds flat. The highest speed I have taken her to is 120kmph ( at 10k rpm in 4th gear ) , I wanted to test her limits but decided against it as the bike is still in run-in period . The gearbox is very smooth ( much better than RTR 180’s ) . The engine grunt is not superbikish like RTR’s but changes to a fantastic sound over 6k rpm . The pickup really slaps the helmet towards your face hard . The bike can also perform really well in traffic because of its good low end torque but it takes a bit of getting used to it . And regarding the weight it simply vanishes into thin air when you are riding the bike.

BRAKING: The braking is also good with dual disc’s in front and rear. The front disc brakes are just fantastic and can stop you instantly whereas the rear disc brakes don’t have that much bite ( although purposely I used only rear brakes for a couple of days and their bite increased significantly , very much comparable to the front brakes ). In some time with enough practice I found out how to use both brakes to provide maximum braking power without getting the tires locked . Although couple of times I had the tires locked under hard braking but the soft compound beauties didn’t let me down , but I also have to admit that TVS Apache RTR and Yamaha R15 are better than Pulsar 220 in braking department .

TYPICAL PULSARIAN NIGGLES?: Over the last two months of my ownership I have done over 1500 kms and have not observed any niggles . The first lot of Pulsar 220’s had many problems like faulty CDI , stalling , auto choke not working fine , cold morning starts etc. but it seems that Bajaj have resolved all these issues in the successive lots . Also till date, I have not observed any fairing vibrations at any rpm ( I have taken her to 11k rpm ) , But even if the niggles arise I will learn to live with it as I love my bike too much .

Reason’s for not choosing Yamaha R15 or TVS Apache RTR180: 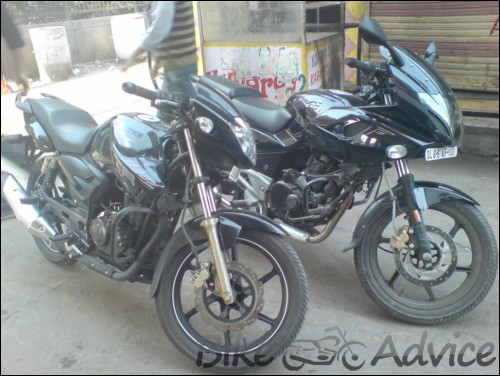 I rode my friend’s RTR 180 and found that the gearbox was not that great . Also the bike was vibrating whenever I took her over 50kmph . These two things were enough to put me off from the RTR’s . But the Yamaha R15 has nothing that one can complain about , the engine is smooth and doesn’t become harsh even after years . Also the name Yamaha answers many questions . But the bike seemed small when viewed from the front or back ( Although from the sides it’s the best looking Indian bike) . Also I was getting the same or even better level of performance for 30,000 less . So , I dropped R15 from my list . That said , I really respect the Yamaha R15 because it has brought so many technologies in the Indian biking scenario . Apologize for the Hero Honda Karizma fan’s as I didn’t consider ZMR as it looked bulky , and also was below par in performance when compared to Pulsar 220 or Yamaha R15 , so it got eliminated from the list.