Hi friends, I am Benjamin Praveen 21 years old, finished my engineering this year. This is my first review about my lover (bike) in website. First of all I should thank God and then Deepak bro for his website who let us to post our bike reviews. 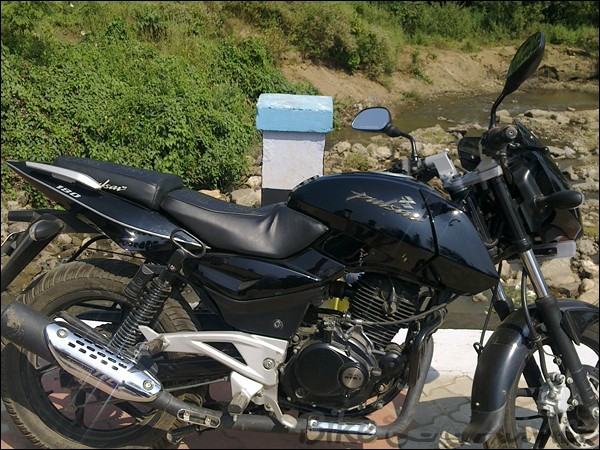 I am not going to specify any technical specifications about my bike since everyone know about it from other reviews, I just want to share the moments which I spent with my bike.

It’s a great story about how I got my eight years dream bike. It’s like a first sight love when I saw the ad of definitely male Pulsar ad which displayed that bike turning its head towards a nurse while she was passing by. From that day onwards I started collecting wrappers and ad papers of Pulsar from various moto magazines. My friend also helped me in collecting those papers.

Daily I used to show the papers and tv ads to my mom asking for my bike. But because of financial problems my parents can’t afford me my dream bike. While I was studying 11th my cousin brother bought his new Hero Honda Splendor Plus, he only taught me to ride the geared bike. But he went abroad for work within few months after buying his bike.

I started using it from my 11th standard to my B.E, 2nd year. My brother came back during my 2nd year end. During those 4 years I forget my dream bike since Splendor Plus consoled me during those days. But eager started when I stopped using my brother’s bike. So now I again started asking for my dream bike to ma parents.

One year gone without using any bike and lost my sleeps during night time because of this issue. At last with great pressure my parents got my eight years dream bike New Pulsar 180UG4 (2009 Edition) on 20th September 2010. Now I am happy and proud that I am owner of one of Pulsar family, yes it is the elder brother of Pulsar 135LS/150 and younger brother of 220S/220F. 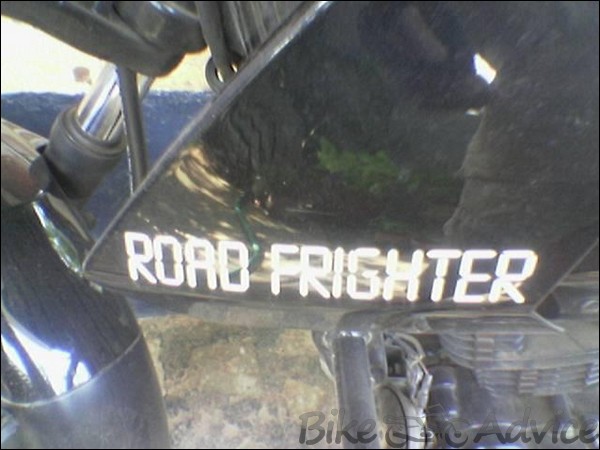 Although it had name as Pulsar but I thought it should be unique from other Pulsars. So I named it as Road Frighter. For 220 there is name like 220S Street Fighter and for 135LS Light Sports, 180 also needs something different, So I kept this name after a great research. This Name also had reason which I will explain in other context. Road Frighter stickered in tank scoops.

I didn’t go for delivery of my bike since I was attending exam, I just went for booking of my bike. Before I was booking I don’t know anything about Pulsar 180 even its technical specifications, I just saw the bike in photos and had a clear idea that its look is something different from Pulsar 150 and other old Pulsars. 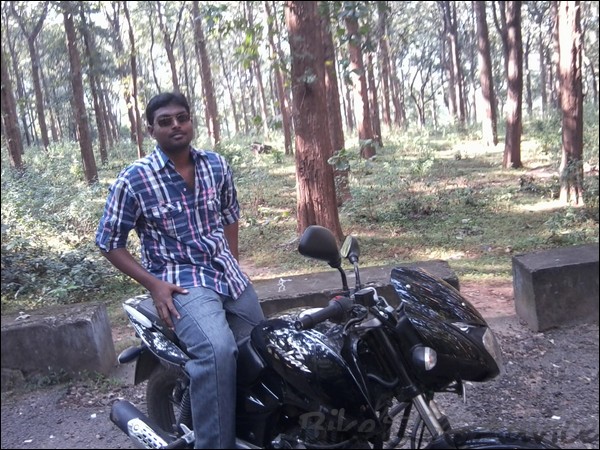 Since I was using Splendor Plus during those four years I stopped collecting Pulsar ads and even don’t know the release of new Pulsar 180 in 2009. I heard that bajaj don’t have resale value and it’s Pulsar need lot of maintenance. Simply I just need a different variant with a mileage of 45-55kmpl so went for this Beast and who is going to sell his bike immediately after purchasing so didn’t bother about resale value. But now I can tell this one needs less maintenance since I had completed 4861kms with only normal two free services.

Yes this is really a beast, while I took my bike outside the home on first day I really felt bad that we would have chosen 150 instead of 180 because of its weight and while getting into its seat I felt it is too height. But From next day onwards I sticked to it. Yes don’t feel it is too weight or too height, it suits well for 5.7’inch guys, so don’t worry friends. I asked sales officer whether I can adjust my bikes height where I bought this bike. But he told, he who is 5.6’ inch itself can ride this bike what’s problem with me.

Hard Days With My Bike

After getting my bike at Tirunelveli I took it to Tirupur because of some personal reasons. Since it is near to my college I used to take it to ma college. I studied in fully residential college where bikes are prohibited. But I used to take it, it is around 80kms from my home to college. Since I took it before my first service itself to a long distance I went only in 60kmph around 4k rpm. 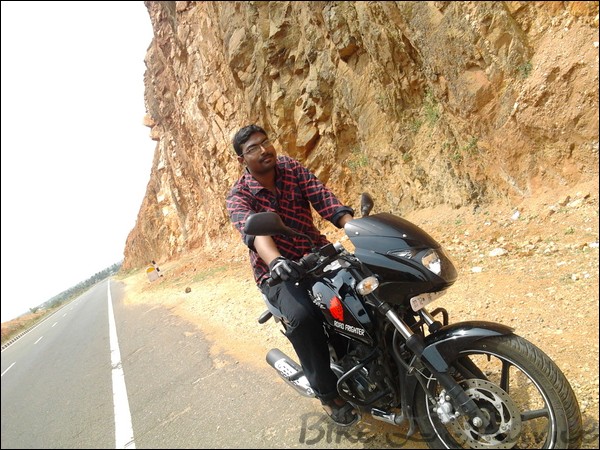 After first service I used to go in 70kmph. Now I used to go in 90kmph normally in highways and in city around 55kmph. I am getting around 40-45kmpl in city and 50-55kmpl in highways. I used to go to Coimbatore from Tirupur through Avinashi route, one day while returning I was trying to overtake a lorry which was going slowly.

But there was a bus in front of me which was not in motion but while I covered half of the lorry, lorry started increasing speed and bus also started from its idle position. Only because of Pulsar 180 I crossed both the vehicle with only a little gap through which my bike went. If it crossed there won’t be any space to go.

Excitement didn’t stop there, after crossing that situation, a big sandstorm occurred near Karumathampatti where only because of this new Pulsars weight I didn’t fell down. After that rain started and I was seeing all the bikers are standing in a shielded or shadow place, but my bike didn’t allow me to join with them I just overcome that situation too with less difficulties.

Fun Time With My Bike

Once I was going in six lane Coimbatore road , while crossing Nav India stop where signal had been released at the time when I reached there, I was trying to overtake a car by left side, but it was going to turn left, suddenly I applied both the brakes, if it is some other bikes other than FZ it would have felt down, but my bikes rear MRF Zapper tyre helped me a lot and didn’t let me there to stop, I overcame that situation with very ease manner. 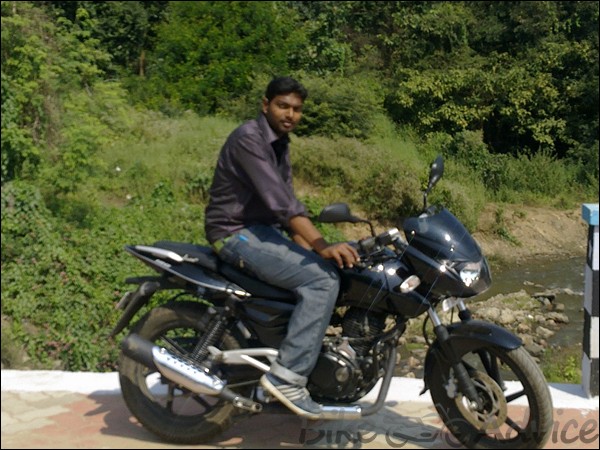 When it happened nearby me two college girls were walking who was afraid because of the sound made by my tyre and thought I am going to fell down, So only I named it as Road Frighter. I don’t need any separation as streets or highways just want to say it will frighten the people in any roads. On another day while I was going through city my bike ran over a stone in road, where this MRF Zapper helped me a lot.

Once I met an accident, it was my mistake I didn’t put signal and suddenly turned right, one who was trying to overtake me dashed me at rear, he felt down but with great shakes I didn’t fell down only because of its great stability. Don’t need to worry about non-kick start because I used to keep my bike in home idle for more than two weeks and while starting after that also no problem had occurred till now.

Once I was going in highway to Coimbatore from Tirupur, since Avinashi route is so much traffic I escaped easily from all jams, but while I was trying to overtake lengthy containers lorry with many vehicles coming in front I just easily came out but a R15 was struggling to overtake because of its fairing.

Same situation occurred in same trip after travelling few kms by another R15. I think all faired vehicles have difficulties in city as well as congested highways. So I suggest you friends, if you are going for Fastest Indian just go for 220S than 220F so that you can clear the road easily with it.

Also I suggest friends if you have idea of taking Pulsar 150 you can just try 180 since it is giving mileage around same factor, my friend who is having Pulsar 150 UG4.5 who bought same time when I bought getting same mileage like me, also it(180) costs only 5k more than 150 with full of stylish and sporty look.

Bad Time With My Bike

One disadvantage in this bike is while simply standing if we apply front brake it will make us fall. Ya I had a situation one day while after purchasing things I took my bike, while turning it I applied front brake since an auto was also turning in front of me, I was not in motion but it fell down on my legs, because of its weight I suffered a lot at that situation.

I told that I am not going to discuss any technical specifications above, but if it is a new reader about Pulsar 180 they need these technical stuffs so I am presenting it below. 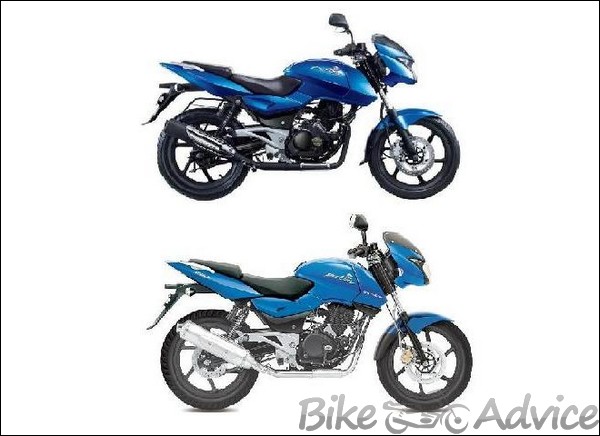 I don’t need to compare this bike with others since every bike have its unique features, Pros and Cons. So we can’t judge each bike comparing with others. But for sure this bike is a great value for money. Surely you won’t feel bad for buying this bike. While owning it don’t roar in road too much since there is Fastest Indian (Pulsar220) and others (R15 etc.,) are there to do it. Respect other bikes in road too.

Friends while driving vehicle whether it may be two or four wheelers, during night time don’t use high beam unnecessarily, use it for pass purpose or if the road is so dark. Don’t use while vehicle is coming in front of you, since it may lead it to accidents. Once again I thank Deepak Bro for giving this opportunity and thank you friends for reading my review patiently.