Hi, Call me Nalin Manoj a.k.a RAZOR. Born Lankan been in India for the last 13+ years for education and now working as a professional. I’m known to be a born biker, I guess that is because my mom loves bike race even though she didn’t know much about it. She used to tell me that she was awake a lot of nights watching bike races, even when she was pregnant with me inside. 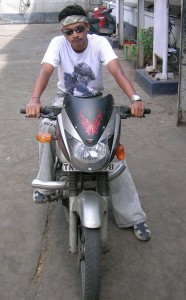 I’m inspired to bikes by all those stories she told me. And now I own two of the best bikes in their make. I was 17 years when I got my first bike. We were actually on our way to buy a moped for me to go to school on the 24th of May 2004 just after my Birthday on May 16th that year. It’s supposed to be my Birthday gift. But you know what? Magic is true man. There was this bike which came like a glance and stood right next to our auto rickshaw in which me and my mom were on the way to the Motor bike showroom. I always dreamt to have a geared bull with me to rip the streets. And my mom just asked, are you sure you are okay with the moped. I said yes. And she asked what about this one right next to us.

Dream came true. Alright I give up the suspense. It was the Bajaj Pulsar 150 DTSi. This was the first of the, DTSi engines launched by Bajaj in India, with an 18 liter tank and 3 liter reserve (HUGE). 12.9 BHP bike with the analog meter console and of course the manly look with the all new Head light assembly with pilot lamps. I Love the bike so much. The ride came to me on the 14th of July 2004. Trust me the engine was so damn good that I felt the king of the Road. You wouldn’t believe if I said that was my first ever motor ride ever since I was born. I never had a ride on any friend’s bikes. I just had a cycle before that a Top gear Y series with 24 gear ratios with mono cross of course.

Imagine if you were fed after a long starve. How would that feel? That is how I felt that time. I still have the same sensation today when I take a short ride on it. It’s a lovely bike.

It is now 7 years old and you wouldn’t believe it if you see the picture or the bike. I used to race for 2 years with it. It had a K&N filter on it, a speed throttle, and a diffuser to kill the ears of people around. It was a perfectly tuned engine. The bike could beat the custom 180cc DTSi’s. I had an increase on pick up and acceleration but lost a lot of kilometers because it drank my fuel. I still managed to get 42 kmpl. No one can handle the bike except for me. My friends had taken it for a ride and landed kissing the road. One of the pictures would describe it. But touch wood never happened to me so far. And now the bike has become the old savvy. I have rehabilitated the bike back to its custom form. All extra’s removed except for the rear tyre.

Of course as usual there are some hiccups with the bike. First thing’s the rear tyre of the Pulsar 150 DTSi. For more mileage Bajaj decided go with the 90/80 18″ size. I was forced to change it to a 120/80 17″ sized MRF Zapper. Looks mattered to me allot. I had halogens which drank my battery so had to change the battery since my auto ignition stopped working after the halogen lamps were installed. And the worst part is the Gear box, if you know what I mean. It was the worst gear box. It fails every 6 months. I had this instance where the first fell and then directly to the third with a neutral in between. Oh damn I lost my second gear. Now I have it replaced with the new gear assembly which is quite good.

Have you ever spent a few minutes talking to your bike? This might sound stupid but should know the fact that the bike has your life on top of it. I spend at least a five minutes alone with my bike every day. I talk to her about how she has been on road and on the race, etc.; it kind of builds the bond and the belief with your ride. You’ll feel the ride in you when the adrenaline pumps inside you. You’ll have the best control in you. Try that people. It sure works for most, trust me on this!

I have spent a 72000+ kms on it now, in the last 7+ years. And it at times hurt, that I can’t take that baby as I did before because of my new ride, the speedster Yamaha R15 Black. He is the new kid in town under spot lights, annoying all the other chicks. I meant the bikes, lolz. But still there was this situation where I had to sell my pulsar to get the new ride. But the bond between me and my pulsar which I call the “RAZOR”, stopped me from doing that because I’m not sure if the next owner of the bike would love it as much as I did. So I decided to wait for some more time to save that money from my pay to get the new ride.

I’m now a happy rider with the classic pulsar 150 DTSi with (48kmpl for the price of petrol today), and the new speedster Yamaha R15 (haven’t named it and suggestions are welcome). R15 Review next season. And hey that is my mom on my new ride. She is an awesome mom.

Remember guys ‘n gals: It is never wrong to ride with precaution. Wear helmets and have control before you speed up.