Hello Bike-o-Philes! This is Sai Sudharshan, proud owner of “World’s first 4-Valve DTS-I Engined bike!”. Yes, the Bajaj Pulsar 135 LS. First of all, I want to thank Bikeadvice.in, a million times for this opportunity. I used to read Bikeadvice.in daily, each and every article/review that has been published in this site is just awesome. These were of great use to me to know more about every bike. Bikeadvice is the best place for every bike enthusiast to find every piece of information about the bikes. Hats off to these guys for their wonderful work and my wishes too. 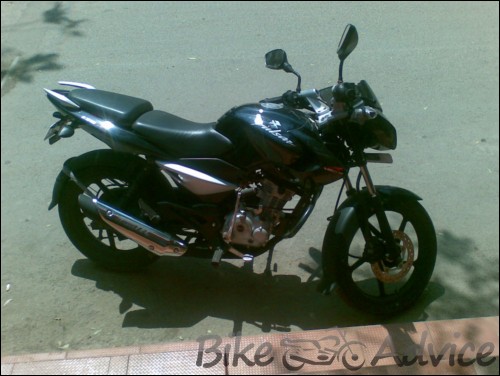 Review of my Pulsar 135 LS : This is my first bike and Bajaj is not new to me since my dad is having a Caliber 115 (Hoodibabaa!) for the past 7 years.

Hence, i know pretty well about the merits and demerits of a bike that has a Bajaj tag attached to it! Since I look thin, I felt larger bikes won’t suit me. But I must admit that I love the Pulsar’s look and styling. So I was eagerly waiting for years to see a lightweight pulsar that would suit my physique. My God! On 26th November, I saw the photo of a bike that had leaked in the internet and it was the Pulsar 135 LS. Thanks to Bikeadvice for displaying that spy picture! My dream came true that day. I waited nearly a month before I booked it. Finally I bought a Midnight Black Pulsar 135 LS on February 4th.The bike has clocked 1500kms as of now and moreover I thought of writing the review after 1000 kms. So here it is! I am not a bike expert! So nothing very technical.

Looks: At first sight, you will be definitely disappointed by its looks. Probably our mind brings a fixed image in front of our eyes when you utter the word “Pulsar”! Thats natural, since we have been gazing at every Pulsar(150’s, 180’s, 200’s and 220’s) daily. But I bet you… Definitely this bike looks awesome when you see this bike and when someone sits on it. I say this because the body of Pulsar 135LS is designed in such a way that it exposes itself perfectly when someone is sitting on it. The Bikini fairing (as Bajaj calls it) headlight is triangular in shape with two wolf-eyes is great and added to that the visor looks really aggressive than its elder siblings! The speedometer, fuel gauge, trip meter, battery indicator etc. are digital with yellow backlight and not orange as in the case of the elder pulsars which will stand apart. The bike features clip-on handlebars by which bajaj had made sure that the rider doesn’t feel like riding a small bike. The fuel tank is smaller in size when compared to its siblings, having a capacity of 8L (excluding reserve). 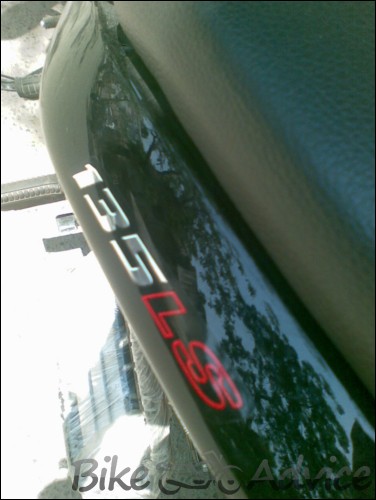 This accounts for the bike’s lightweight character! For the first time in the history of Pulsars, this youngest sibling possesses knee rests which gives you extra grip while riding at high speeds. Disk brakes are provided for the front wheel and the MRF Zappers look stylish on both the wheels apart from functionality. The seat’s are different from the 150cc ones. Did you notice the previous sentence properly? I said SEATS! Yes, Pulsar 135LS features Split Seats as in the 180’s and its elders. The rear LED tail lamps are again different from its elders. If I play any interesting game with the traffic rules, the traffic police can spot my bike’s registration number clearly even at night time since there is lamp attached to the number plate which will bring my game to an end. Finally, here comes the most eye-catching feature of the bike. The Rear Mud-Guard! Wondering how it can be eye-catchy? Because they are absent! By saying it eye-catching, I meant that people would see that and say “Where is the mud-guard gone??” Frankly I too don’t like this! But as a substitute, there is a tyre-hugger which covers almost half of the rear tyre. (This could have been absent instead which may look good!!). The length of the silencer has been reduced. Thus, Bajaj tries to give a sporty look to the bike to justify why they call it as ‘LS’ which stands for Light Sport.

Riding and Handling: The bike features both kick and self start and an Auto-Choke helps in cold starts. When you start the bike, one can hear the same growl which the bigger pulsars make, inviting everyone to turn towards you! Not only this, when you start giving some work for your wrist on the accelerator, you can definitely prove that you are not driving an ordinary 135cc bike but a pulsar! The bike features 5 speed transmission. 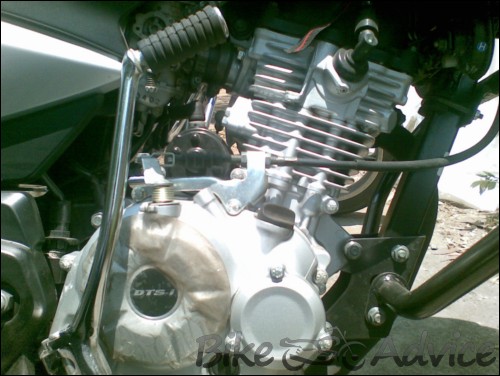 Since, I wish to use my bike for a long time 😉 and its a new bike, i haven’t driven it with more than 75kmph speed. So I didn’t get a chance to experience my bike’s maximum power. But since we drive most of the time in 50s and 60s in daily traffic, what I feel is that the bike is smoother when it is running in 60s when compared to 50s.
Last but not the least.. Brakes; The most important entity which gives every biker the guts to twist the wrist more and more. I would say that the brakes are really awesome! You engage! You Stop! Since the bike is very light, you can easily twist and turn it around the corners, amidst the vehicles during traffic jams with least effort. 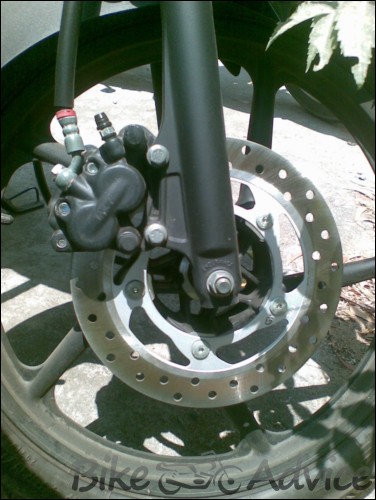 Talking about the performance of the bike at lower speeds, the bike moves freely in fourth gear even in 25+ kmph! The bike stands high in terms of fuel efficiency. When you drive it in 45-50kmph,the bike gives you around 65 kmpl. When you treat it harsh, it in turn behaves the same way towards your wallet, but even then you get more than 55 kmpl!!!