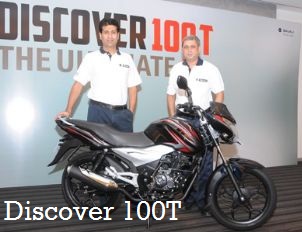 The Indian 2 wheeler giant, Bajaj Auto is planning to export its recently launched commuter-tourer motorcycle, the 100T to foreign countries. This information was divulged by a company official who commented that Bajaj is having export plans with the 100T as a part of its strategy to ramp up product offerings in overseas markets. Initially the company focused on the domestic market and aims to gain the maximum out of it. Bajaj launched the 100T very recently, which has been dubbed by Bajaj officials as one of the most advanced commuter motorcycles yet for the Indian motorcycling arena.

The Discover 100T is powered by a segment first 4 Valve DTS I engine of 102cc displacement that churns out an impressive 10.2 BHP of power and 9.2 NM of torque. This engine is mated to a 5 speed gearbox and sends power to rear wheels via a chain drive. Bajaj claims this bike can do a top speed of 100 km/h and also deliver a superb mileage figure of 87 kmpl. Bajaj launched the discover 100T in India at Rs. 51,979 (ex-showroom Chennai). Currently Bajaj is already exporting its models like the Pulsar and the Discover 125 and 150 to export markets like Indonesia, South Africa and Latin America. Bajaj wants to add the Discover 100T to that list too. Bajaj has planned to sell close to 45,000 units nationwide this year. Bajaj Auto would begin production of this motorcycle at its Pant Nagar plant end of this month for serving the Northern markets.

Out of the 45,000 units, the company expects 12,000 units alone to be lapped up by the Tamil Nadu since its coincidence with the forthcoming festive season. Segment wise, the Discover 100T competes with Honda’s latest offering, the Dream Yuga, Hero MotoCorp’s Passion Pro and Suzuki’s Hayate but has been priced fairly expensive owing to the state-of-the-art technology that the bike incorporates.