Hi guys, I’m Anirudh V, am 21, a total Automobile fanatic – since childhood! I love to drive and also modify cars and bikes a lot. So to fuel my passion further, I went on and graduated as an Automobile Engineer from Mumbai. I have trained with Toyota and Bajaj for a period of 3 months each during my college days. 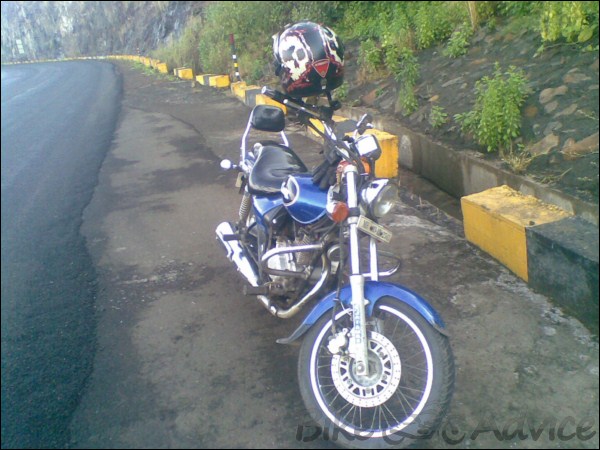 My First Bike: Ever since I turned 18, I started to pester my dad for a bike – After a 3 month long struggle he finally gave up and on 18th of March 2008, and I became a proud owner of a second hand Bajaj Discover 125cc, which was my first bike ever! Being the first one to get a bike in the group I enjoyed a lot of attention!

I used to take care of it as my girlfriend – well not literally. I used to service it at regular intervalsyes I used to service it myself. So obsessed with it so as to save all my pocket money to put on performance NGK Iridium Spark plugs, bored the engine and used oversized piston, put a bigger jet in the carburetor and also used synthetic blend oil to achieve maximum performance!

My bike became very capable and strong now – and with power comes great amount of stupidity! Well that was my case!! Once I got into a street race with a Honda Unicorn and not so surprisingly, I won! That win made my head high and thus more inclined towards tuning and racing bikes. I raced a lot and also won most of them. I learnt to drag from a professional drag racer.

So, this one time I was racing a TVS Fiero on the roads, all was good, I had the lead by about 50-70 m but then I didn’t realize how stupid it was to race on a crowded blacktop, there was gravel on the road, saw a dumper approaching the wrong way, I pushed in my brakes very hard only to slip and I crashed head first. Thankfully to my helmet I survived. I had a broken jaw, a stiff neck but wasn’t badly bruised.

I was too scared to go home like that so I stayed at my friends place for 10 days. I just informed my dad about this incident and requested him not to tell my mother.
The accident wasn’t so grave enough but it had left bruises in my mind. I vowed never to race again!

After a certain level of recovery came another surprise. I came across an ad in www.Bikes4sale.in which described my Discover – my dad wanted to sell it! I was shattered. He finally sold it on 4th December 09. I was lamed. I didn’t eat that night! And that day, I made up my mind that I would buy my next bike of my own money and won’t ever take money from daddy.

I finally graduated as an Automobile Engineer this year and then I got into a new job. My work place is 5 kms from my home. Every day I used to walk up and down that distance waiting for the first month of my job to end as I desperately needed that money for you know what. The last week of my first month of my job, I started to search for new bikes on portals, asked my friends to find some bikes; I was even ok with a petrol guzzler Yamaha RX 100.

Then came a friend who wanted to sell off his Bajaj Avenger 180cc as he needed some money to fund a new laptop. The bike was in a total mess, it had had an accident a month ago, fuel tank had a dent, rear brakes were dead, front fork bent, no leg guards, bent handles etc. In short it was more of a scrap. But what prompted me to buy it was the brilliant engine. It had no fault then.

It took me a great deal of energy to negotiate the bike for Rs 20k. I was proud that it was the first thing I brought for myself of my hard earned money. But this was not it. Now, the biggest task was to make the bike ready for the road and also make it look beautiful. Slowly and eventually I repaired the bike and customized it to my requirements, got the tank dent removed, installed new rear brakes, repaired the bent fork, got the leg guards, serviced the engine, put synthetic oil into it, got it painted blue, got new vinyl’s-radium ones, upgraded to iridium plugs and the best onemade a free flow exhaust after making calculations by myself (which after a while had to get it un-installed because it wasn’t road legal)!!

The bike has some vibrations like any other Indian bike when it enters the speed range between 60-80 kmph. Surprisingly, my Avenger doesn’t vibrate that much after 80 kmph and has a smooth acceleration after reaching 80 kmph as well. My friend who owns an Avenger 200cc himself refused to believe this until he took a ride himself.

The only problem I found with this bike is the shifting. The gear shift pedal is too long enough for the heel to shift back and change gears, hence it is like the conventional bike which needs shifting using toes only, not that it’s a bad thing but the uselessly long pedal ain’t required then.

Handling is better mainly because of the large 130mm tires on 15 inch rims but it’s a task for a 156kg bike to take a smooth U-Turn. The Avenger has an awesome riding position as well. The Braking is just fine having 260 mm discs in the front and 130 mm drums in the rear.

One thing I miss in this bike is the fuel gauge. It feels kinda stupid to shake the bike and check the fuel level as it used to be done in earlier bikes. She also misses a tachometer, asking for one in a cruiser wouldn’t be stupid as the Royal Enfield Thunderbird has it. Also the headlights needed to be direct battery connected.

My Avenger is now is the most beautiful bike in my colony..and the best part is – I don’t feel like speeding her even after injecting some more power into her.. as I love the attention I get when people stare at her when I go by!! But that doesn’t mean she aint fast.I have topped her at 135 kmph(NH-3).!!!

Finally, my patience and perseverance seems to have paid off and I’m loving it a lot! The bike now is a part of my day to day life – I can’t live without her and neither can she live without me 🙂