Ever since Bajaj announced that it will re-launch Boxer in India, a question always strikes in my mind “Why Bajaj wants to re-launch Boxer (Bharat motorcycle) in India?” Is there something wrong with Bajaj Auto who wants to establish itself as a global premium motorcycle manufacturer? Bajaj Auto which always wanted to move customer from entry level to executive segment, is now trying to re-enter entry level segment but why?

The company (under the leadership of Rajiv Bajaj), which always aimed India’s two wheeler market is now aiming Bharat’s two wheeler market and that too with 150cc motorcycle. This article aims to answer all of the above questions. But before we start, let’s have background of Boxer. 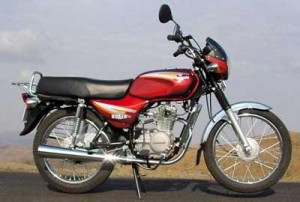 It was the year 1997 when Bajaj Auto launched Boxer in India. It was a time when the Indian two wheeler market was shifting from scooter to motorcycle. Boxer was launched in the entry level segment and soon it became the reference brand in this segment. It became the most popular in the rural and semi urban area due to its rugged performance and durability. Bajaj Auto was able to sell 50,000 Boxers each month which was enough to make it second largest selling two wheeler brand and largest selling entry level segment motorcycle in India. As far as sales concern only Splendor managed to outdo Boxer.

The major reason of Boxer brand’s success was its unmatchable price. It was undercutting its major competitor Hero Honda’s motorcycle by whopping Rs.8,000. May of us would be surprised to know that Bajaj Auto had initially made a loss of Rs. 1,500 on each Boxer sold. Later with the strong volume growth and effective cost management, Bajaj Auto started making profit of Rs. 4,000 on each Boxer.

The company also introduced its various variants like AT, CT & AR at different price points. It was Boxer which started trend of various variant for a single brand in India. To control and expand its presence in entry level segment, Bajaj Auto discontinued Boxer in 2004 and replaced it with CT 100. CT100 also became another success story for Bajaj Auto in the entry level segment.

Why a “Bharat motorcycle”?

Is there any difference if we say “India” or “Bharat”? As far as name concern it is just one name used for another name like “Hindustan” for “India”. Just like William Shakespeare famous quote, “What’s in a name? That which we call a rose by any other name would smell as sweet.” But it makes huge difference as far as market segmentation is concern. India refers to a market segment which is modern, civilized, educated, life style oriented, while Bharat refers to a market segment which is traditional, uncivilized, uneducated and value oriented.

It refers to two different mindsets of people which can be described with names like “Harry” and “Hari”. A first segment refers to person like “Harry” and the second refers to “Hari”. “Harry” is mostly found in urban area while “Hari” is mostly found in rural/semi urban area. Please note we are referring two different mindsets of people and not referring to place here. Although the proportion is very less, you may find “Hari” in urban area and “Harry” in rural/semi urban area. The fact cannot be ignored that still “Hari” accounts for a larger part of a total population of the country. 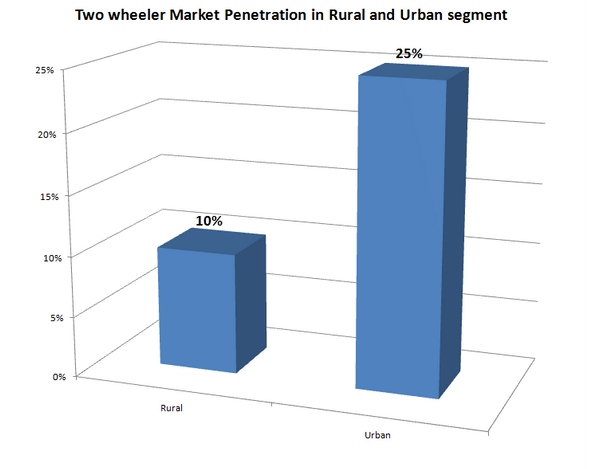 Here comes “Bharat motorcycle” in picture. Bajaj Auto has classified market segment as Ram and Krishna. According to Rajiv Bajaj “Ram is the good guy who buys a bike for functional reasons while Krishna is the naughty guy who wants some fun with his bike.”

As far as this two segment concern Bajaj Auto has Discover (commuter) for Ram and Pulsar (sports) for Krishna. But when it comes to India and Bharat, Bajaj Auto’s most of the products are targeted to India. The company does not have a strong product solely for “Bharat”. It also revels in its marketing slogan. Before 10-12 years the marketing slogan was “Naye Bharat ki Nayi Tasveer, Hamara Bajaj” (Hindi for New picture of new India, Ours Bajaj). Now it’s “Discover India with power of 1 liter”, “India’s number 1 sports bike”.

As mentioned major portion of Bharat population lives in rural/semi urban area. It is the area where market penetration of two wheelers is just 10% compared to 25% of urban area. The fact which Hero Honda identified years ago and same reflected in its marketing strategy. In the year 2007 Hero Honda formed a rural division dedicated to increase its penetration in rural and semi urban area. 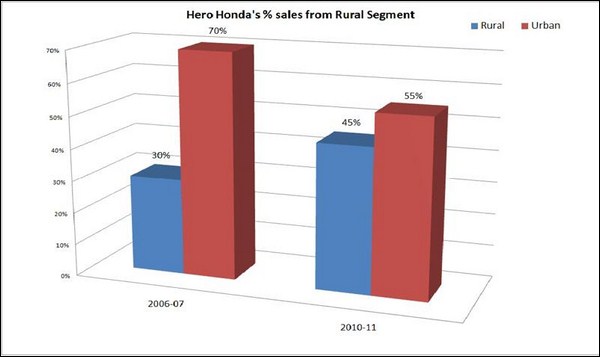 Result, today hero Honda’s 45% sales come through rural segment which was around 30% few years back. The company has now 5,000 touch points under this program and is targeting to sale 1 out 2 bike (50%) from rural segment within this or next year. Moreover, rural segment prefers to buy in cash and it is more loyal to its brand. The segment is also showing high disposable income growth due to increase prices of vegetables and grains. This is the segment which helped Hero Honda to increase its sales at the time of credit crisis in the year 2008-09 (This is a strong reason why Hero Honda is doing 5,00,000 units a month). In short this is a market segment for Bajaj Auto which it can’t ignore.

The motorcycle segment is mainly classified into three categories Entry level (Commuter Standard), Executive (Commuter Deluxe) and Performance/Premium (sports). Further on the price front it can be classified as less than Rs. 40,000 (Entry), Rs. 40,000 – Rs. 50,000 (Executive), more than Rs. 50,000 (Premium). Most of the entry level segment volume comes from rural area. Consumer of this segment just wants basic motorcycle. This segment was accounting in the range of 40- 43% of country’s total motorcycle sales till 2005-06 but currently it accounts for only 16% of country’s total motorcycle sales with around 1.5 million unit sales each year. The major reason behind decline in market share of entry level segment is discontinuation of top performing model Bajaj CT 100 and TVS Max 100. Combined sales of both were in excess of 1 ,00,000 units/month.

Bajaj Auto traditionally ruled the entry level segment till it discontinued CT100. The company discontinued CT100 because it wanted to leave the 100cc segment. After that it launched Platina in this segment but it fails to clock the same volume as CT100. Currently Bajaj Auto has constrained Platina monthly production to 40,000 units a month and it currently doing sales volume of 30,000 – 35,000 units a month.

Currently Hero Honda CD series motorcycle rules this segment. Hero Honda has seen massive jump in the sales of CD series motorcycle in the last financial year. If Hero Honda is doing good year on year volume growth in the entry level segment, why Bajaj Auto cannot do the same when it has traditionally ruled this segment? Moreover, the segment is mainly contracted due to the discontinuation of CT 100. A right product may increase entry level segment market share in total two wheeler sales. Lastly, this segment is a key to penetrate rural/semi urban area. Once you have strong product for entry level segment, you can leverage the sales of executive and premium segment in rural/semi urban area.

Can I ask the same question in another way, “Why TVS motors re-launched Max brand?” It is easy to re-launch the same brand in the same segment especially when it was leader in the past. As mentioned earlier Boxer was a reference brand in entry level segment and that will do half job for Bajaj Auto’s marketing team. The Boxer brand also has record of leadership. It has never failed in any market. Take example of Africa where it rules the entry level segment despite competing with Japanese and Chinese motorcycle. Boxer brand also helped Bajaj Auto in the time of credit crisis by growing its sales number on month on month basis. It is also possible that Bajaj Auto wants a universal brand like Boxer for entry level segment.

This segment demands a robust motorcycle that can carry a heavy load and can run on rough roads, so the original idea is to have a 150cc motorcycle which has minimum 50% more torque than 100cc motorcycle and only 10% less fuel efficiency than 100cc motorcycle. In the words of Rajiv Bajaj “What I want is a tractor on a two-wheeler that can take two or three riders and the extra load of products on it, or simply a 150-cc.”

Moreover there are two major facts which we cannot ignore. HMSI is working on $600 (Rs. 27,000) motorcycle and Hero Honda is planning Nano avatar of motorcycle. Both of which will compete with the existing entry level segment motorcycle. So, instead of having competition Bajaj Auto wants to create a new segment for its Boxer motorcycle.

There is difference between “doing things right” (Efficiency) and “doing right things” (Effectiveness). Bajaj Auto left 100cc motorcycle segment and entry level segment few years back while Hero Honda penetrated this market in the absence of strong competition. Soon Bajaj Auto realized its mistake and reentered 100cc segment with the launch of Discover 100cc. Bajaj Auto has become efficient manufacturer of motorcycle but it is still in the process of learning effective marketing.