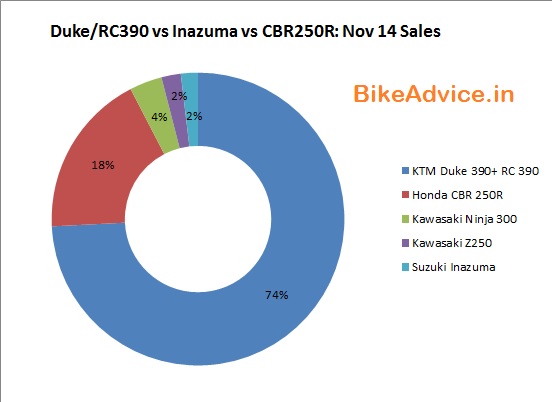 The 250-300 cc segment has been rapidly growing and is becoming increasingly competitive with new players joining or set to join soon. While that seems all good, the country’s cheapest quarter litre motorcycle, the Honda CBR 250R is facing a tough competition. Not only is it becoming old, it also desperately needs a new model upgrade.

While the other South East Asian markets have received an update for their CBR 250R, there is no official/unofficial word about India yet. Looks like the day is not very far when the 250R will be axed for its more powerful sibling, CBR 300R.

Nonetheless, let us look at what the last month had in offer for the rivals in 250 to 400cc category.

KTM experienced a slight drop in sales as compared to Oct 2104, but 828 odd units they sold in Nov are still significantly larger than all the listed motorcycles combined together! Clearly, the RC and the Duke 390 are two of the best things that could have happened to the Indian two-wheeler market.

Honda’s dwindling share was boosted last month with nearly double the number of sales since their festive season’s performance. With 203 units of the CBR250R sold in November, the company closed in on the duo of RC390 and Duke 390.

Ninja 300 continues to chug along with some very decent sales, paying respect to the fantastic motorcycle it is. Its sales volume of just 40 units in November might seem paltry but we do have to remember that this is a 4 lakh rupees bike we are talking about, which is pretty respectable for this segment. And if we include Kawasaki’s other offering in the segment, Z250, the Japanese is getting a fairly decent hold of the twin-cylinder segment.

Inazuma, Suzuki’s half-born child also received a bolster in sales. However, there are strong speculations that the company is withdrawing it from the market within 3 months from now.