Avenger is one bike that certainly demand respect among the Indian bikes. For a true biker, it is the cruiser bikes which give him that feel of Biking. For him, a sport-bike is a piece of toy that produces nothing more than sound. 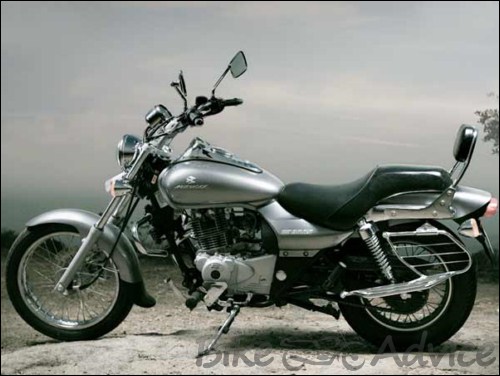 Now, that being the scenario, Indian bikers gets to quench their thirst only by getting their hands on Royal Enfield products. This market is almost monopolized owing to the market share the company dominates in this segment.  It was at such a time Yamaha launched its cruiser ‘Enticer’. I know I was a teenager then when this bike entered the market. I still remember the ad in the newspaper with the words ‘At an introductory price of Rs.50,000!’ But unfortunately, for some reason the bike did not do well, as a result of which it was taken off the production lines. But, you’ll still find a hell lot of Enticers on road, even today.

Then it was time for the Indian bikers to get the next shock of life. Guess what it was! Not many of you will be knowing that Bajaj Auto came up with a product named ‘Eliminator’. People knowing it will be able to remember the beauty of it. Eliminator was a great looking cruiser from Bajaj at that point of time. In fact, it was first try from the nation’s second largest player. But, then what went wrong.

It was the premium pricing strategy that made Bajaj Auto got a blow on the face. Guess the price tag that the bike was bearing along its neck! It was a whooping INR one lakh. Imagine a bike priced at a lakh of Rupees and that too ten years back. But trust me it was one of the macho looking bikes I’ve ever seen in India. It reminded Arnold in Terminator at that time.

So, after this whole story Bajaj Auto made up its mind to come up with the Avenger which borrowed its styling cues majorly from the Eliminator.  After a long of engine talks, Bajaj made the Avenger house Pulsar 220’s engine which became the ideal fit on Avenger. A cruiser with a 220cc engine was just what made this bike a good choice for those interested in using a bike for long rides. However, Avenger had its own set of problems which we’ll not be discussing along this post.

Now, the speculation is that Bajaj Auto will make use of the newly launched Pulsar 200NS’ engine into the Avenger.  Though it is less in terms of displacement when compared with the older engine, it still manages to produce 23 BHP of power and 18 Nm of torque. This would make the Avenger a fun – to – ride bike with more enthusiasts thronging around the bike.

The Avenger as a whole is a decent bike to hit the highways. If you wanna use this within the city limits, well, it’s not a great choice. The entire package is capable of offering an exhilarating experience to the rider. But, as I’d mentioned, this is just a speculation from our side.

Let’s hope for the best to happen for the Avenger so that it re – gains its respect back.