I’ve been a motorcycle fanatic for as long as I can remember. I’ve lived most of my life in Saudi Arabia where the only motorcycles that I ever set my eyes on were the superbikes like the Fireblade, the Ninja, the Gixxers, the legendary Yamaha R1 or the Harley Davidsons. And as I was merely a school going kid back then, owning a motorcycle was just a dream for me. 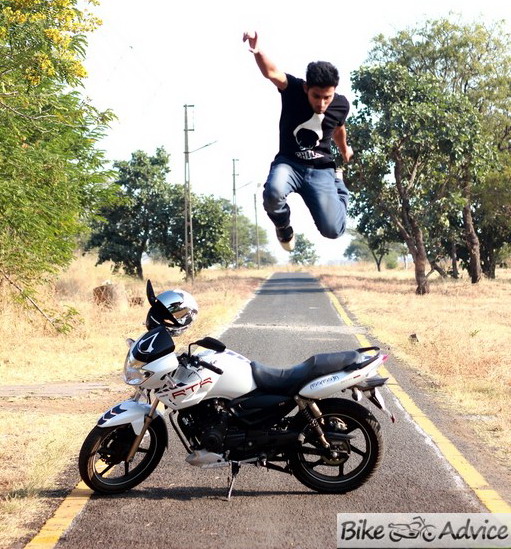 Although the biking scene here in India is a lot different from what it used to be out there, the passion and dedication that everyone shows towards motorcycling is the same.

I joined college back in 2009 and at that time I had never ever ridden a bike let alone own one. I knew how to ride a cycle very well so it was relatively easy for me to learn how to ride a bike once my friends guided me. It was only in my 3rd year that I was finally able to convince my dad to get me a motorcycle.

Now I had set my eyes on the Yamaha FZ, which has worked wonders for Yamaha in the Indian biking scene or the TVS Apache RTR 180 which was well known among the youth for its raw power delivery and intense acceleration.

Then came the promos for the TVS Apache RTR 180 ABS online and that’s when I decided that if I had to get a bike, it had to be the RTR 180 ABS and nothing else. Why? Because back then, it was the best bang for the buck! You get ABSolute power with ABSolute control – all in a nifty package… what more could anyone ask for? 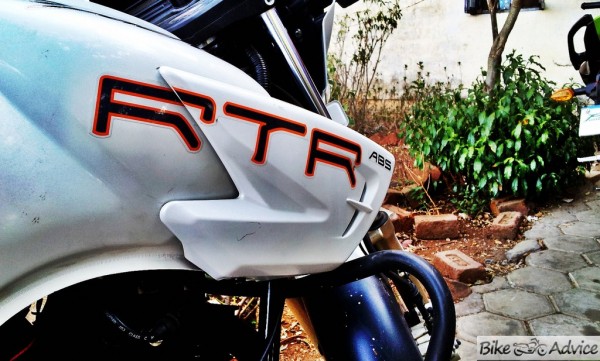 I remember the day I got my bike very well… It was the 28th of July, 2011. I had already purchased a matte white LS2 helmet even before I got the bike because you know what they say – Safety First 😛

8 of us went over to the TVS showroom in Bhopal to take delivery of the bike. The salesman gave me the key to the bike and I kickstarted for the first time ever and brought the engine to life. We completed all the paperwork in the next half an hour or so and the next thing I know was that I was the proud owner of the brand new TVS Apache RTR 180 ABS!

The first 1000 kilometers were the most difficult part because while breaking in the engine, I couldn’t exceed the 4000 RPM limit. It took me almost 9 days to complete the initial 1000 km but once the first service was done, I couldn’t stop myself from revving it hard. The aggressive exhaust note was one of the best among all the Indian bikes and whenever I stopped at traffic signals or the parking lots, people would come up to me and ask me various details about the bik 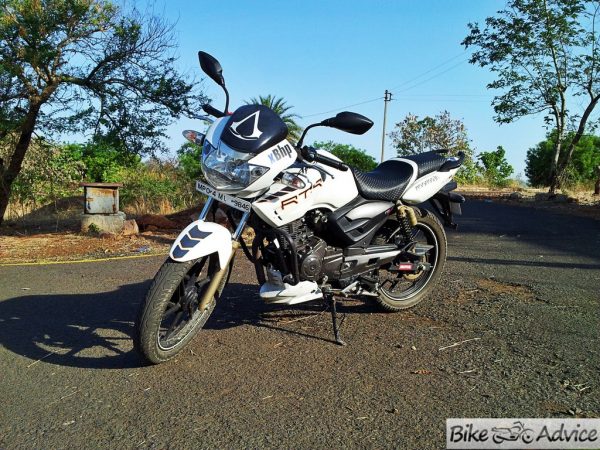 Enough about getting the bike, let’s focus on the main features of the bike now.

ABS on a bike? That too, a first on an Indian motorcycle! What is ABS you ask? Well in a normal bike when you apply the disc brakes, the wheel tends to lock resulting in a skid and often, a fall.

What the ABS HECU (Hydraulic Electronic Control Unit) does is constantly monitor whether the wheel is spinning or not and as soon as it detects that the brakes are being applied, it comes into action and prevents the brakes from locking by releasing the pressure and reapplying the brakes. This sequence of constant braking and releasing continues until the bike comes to a halt, even on loose surfaces like rubble or sand or on water too! 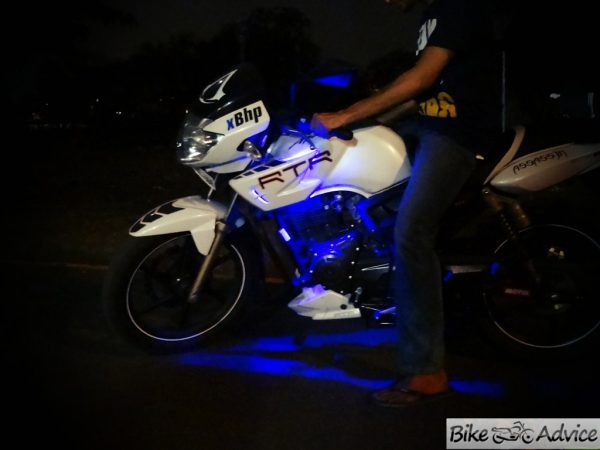 ABS has saved my life more times than I can count. Trust me, it’s worth every penny.

Style and Build quality
The guys at TVS haven’t really updated their design much, but that doesn’t stop the RTR from selling in in tens of thousands! The RTR180ABS comes with a different sticker job as compared to the regular RTR180 which makes it stand out from the crowd. The carbon fiber like pattern on the stickers with the orange accents on a pearl white paint job was a good idea and it goes well with the bike. The split seat grab rails look great and are quite functional too (as compared to a Pulsar 180 which is merely for looks.)

I’ve never had any problems whatsoever with the build quality of the bike but to some people, the design did seem a bit outdated. The plastics etc were fine but the only thing I feel the bike lacks is flexible indicators. Although my indicators are still intact, many of my friends who own the Apache have faced the problem of broken indicators just because they are not flexible.

The best bit is the removable rear flap which saves you from all the mud in the rainy season.

Now TVS advertises this bike as a racing bike which was evident from the front leaning aggressive riding position – the clip on handlebars give a good sense of control over the bike but when I started riding the bike for the first time, I did face some pain in the back. Now that I’m used to the seating position, I have no issues with the comfort at all. The seat is one of the best among all Indian bikes because every other person who has ridden pillion with me has always told me how comfortable and cushioned the stock seat is. 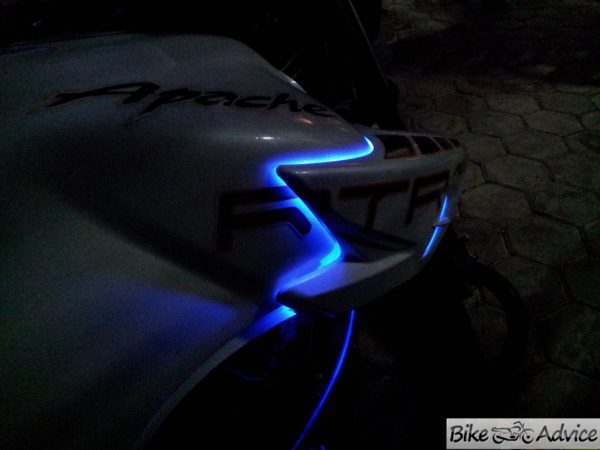 The Apache was always known for its vibrations which start to creep in after 5000 RPM or so, but my bike was always somewhat refined and the vibes were always on the low side. I’ve done a 0-60 in 3.8 seconds which proves that this bike is focused more towards intense acceleration than top speed.

It is common for people in India to ride triples (or sometimes even 4 people at a time) on a bike, but I’ve taken care to avoid it at all cost so as to ensure that nothing happens to my baby. My bike is almost 2 years old now and it’s still as rev happy as I bought it back in 2011. The 17 BHP motor is sufficient for me right now and churns out enough power to get me from point A to point B really quick. 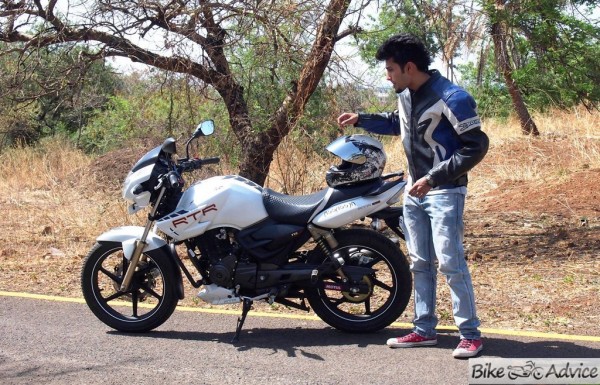 There have been very rare false neutrals, and the gears shift with ease. I’ve touched 125 kmph on the bike (Speedo indicated) and I’ve always felt that the bike could actually have one more gear to smoothen out the ride quality a little more. The torque is enough to pull through heavy traffic and doesn’t require you to shift through all the gears too much.

­The RTR180ABS comes with telescopic forks in the front and inverted gas charged shock absorbers at the rear. Although the rear suspension is adjustable, it is more towards the hard side leading to slight discomfort when going over speed breakers or potholes.
Also, the stock tires aren’t exactly traction friendly and go a little off track under hard braking or insane cornering. So be careful while leaning as you might lose control and start fishtailing. 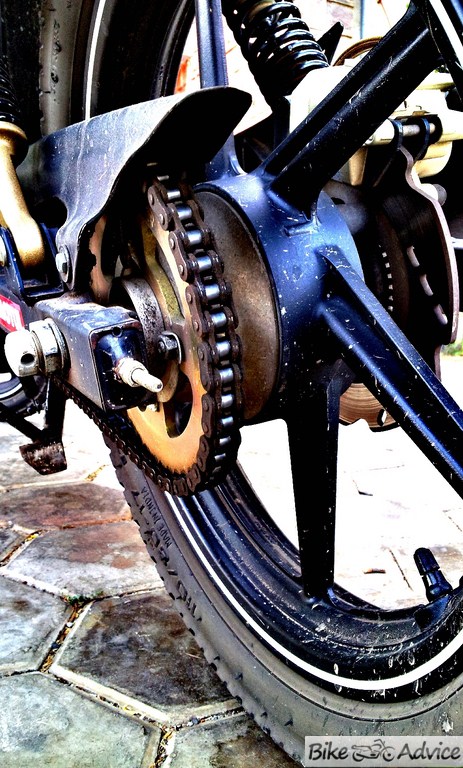 Modifications, mileage and all that
Although the bike was in proper running condition while stock, I couldn’t stop myself from experimenting to some extent and as a result, I have done a few mods on the bike like – 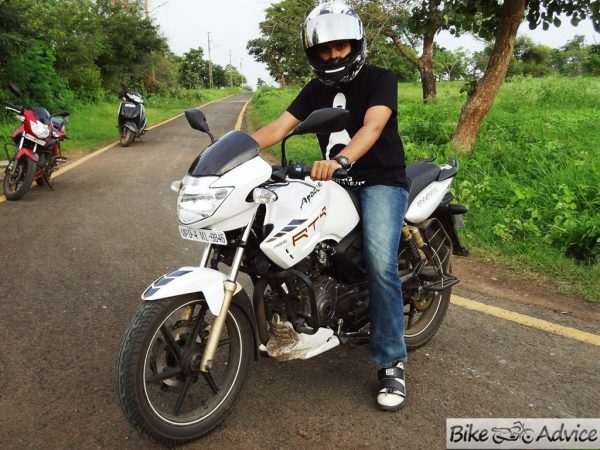 One thing I’ve noticed is that I was using TVS TRU4 engine oil up to the 7000 km mark then I made a switch to MOTUL 5100T semi synthetic oil. The bike’s feedback changed instantly. Recently I changed to MOTUL 300V 15W50 (Fully Synthetic, Double Ester) and now my bike’s flying!

My bike returned a mileage of about 35 kmpl while I was riding hard but otherwise gives me a mileage of 40+. My usual commute consists of city riding with occasional highway rides.

All in all, I’m completely satisfied with my bike and I hope to add in some more modifications in the near future.

If you’re looking for a mean machine that delivers performance, the RTR 180 ABS is the bike you should go for!