With the Indian market scene getting hotter and more intense by the day, people are becoming more and more confused as there are many more choices to choose from. In a world where one bike scores over the other in one department and the other one in the other, how to zero in on a bike of our choice? Here we try to ease out the decision between the two of the most sought after bikes in the market. One is known for its blasting performance and the other for its breathtaking looks. Let’s try to figure out which way does the needle bend. 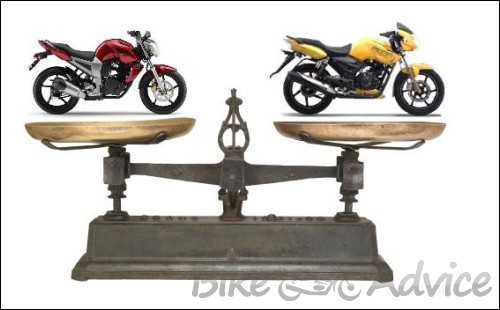 Engine, Transmission & Styling: The TVS Apache RTR 160 is loaded with an air cooled 159.7 cc twin valve engine which produces a peak power output of an astounding 15.2 Bhp which comes at 8500 revolutions of the engine. Maximum torque is a handy 13.1 Nm at 6000 RPM. The bike has a short stroke high revving motor which goes all the way to 12000 RPM without the rev limiter playing spoilsport. The bike breathes through the Mikuni BS26 carburetor. The whole assembly is mounted on a double cradle frame which is rigid and sturdy.

Talking about the Yamaha FZ , an air cooled 153 cc 2 valve engine drives the bike which produces a peak power output of 14 PS (13.8 Bhp) which comes at an early 7500 RPM and a maximum torque of a mammoth 14 Nm which is well spread throughout the rev band and peaks at 6000 RPM. The same Mikuni BS26 does the carburetion duties on the bike. The engine rests on a diamond frame which is pretty well engineered and gives the bike more agility and confidence on high speeds.

If we compare the bikes head-on, then we will understand the fact that both the bikes have pretty different characteristics. While Apache has a more meaty and rugged feel, FZ seems to be a cool and calm customer which does its job with near perfection. In fact, Apache’s engine is harsh and it is evident at pretty lower RPMs of 4000 and above and this is one thing we would like TVS to work on with attention as this factor mars the overall lovely capabilities of the bike. FZ depicts the true Yamaha engineering with one of the most refined mills to ride on and the bike seems to be completely under ease even at higher rpms.

Both the bikes come loaded with a five speed gearbox. While the gearing feel has been improved on the Apache from its previous iterations but it fails, and we go to the extent of saying ‘badly’, in front of the super slick, super smooth gearbox of the FZ. It seems like Yamaha and Honda can never go wrong at least in this department!

Need we even talk about the styling of the bikes; FZ stands a clear winner here with its bold styling borrowed from the bigger FZ 1 bikes. From the naked front headlamps to the lovely sculpted massive looking tank to the dual tone pointed seat to the countries fattest tyres, every inch of the bike exudes style. It’s not that the TVS looks plain, but it has been in the market for a while and everybody praises the ‘new’ looks in the market. RTR is a fantastic looking bike with one of the best digital consoles and lovely fit and finish.

Comfort, Suspension & Handling: Apache comes loaded with optimized telescopic shock ups upfront which do not feel spongy as Unicorn’s and not as hard as the Enfields. TVS has deployed the spring aided Gas Charged shock absorbers (which they call as MIG, Monotube Inverted Gas Filled Shox) at the rear which have a stroke of 105mm. The seating posture of the bike is front biased and more inclined towards fast moving or racing. This enhances the chances of backpain and fatigue on long tours but once you become used to it, you would become addicted to it! The knee recess is so very well sorted out that a person of the height upto 5 feet 10 inches would feel that they have entered a cockpit tailor made just for them, but the downside is for the people of taller heights. They would find the seating awkward and may well avoid the bike et all. Seats are pretty well cushioned and the size of the front seat is just perfect but the rear seat is a real pain in the ass! We wonder if they made those seats only for small kids or very slim fellows. It’s pretty small and with those bull shaped upward pointed rear grab rails hungry for your fatter butts, things only get worse!

For the Yamaha, the story is not very different and the rear seat is small and puny (but at least bigger than Apaches). The front seat is pretty well sorted and provides ample amount of space and cushion to accommodate even fatter butts. FZ comes equipped with large 41 mm front telescopic shock absorbers which happen to be the fattest on any current Indian motorcycle with the stroke being a lovely 130mm which provides lovely shock absorption capabilities (better than Apache’s). Added to the lovely front is the Monocross suspension at the rear which has a travel of 120mm and provides a very well sorted center of gravity to the bike. Damping characteristics of the suspensions during acceleration and particularly braking are one of the best and contribute significantly to the high speed stability and acute cornering of the bike. Even when seated two, the bike doesn’t bottom out on normal and sudden potholes.

Instrumentation & Braking: The Yamaha is loaded with a big 267 mm diameter front disc brake which, along with a fat 100 section rubber helps in very good braking power. The rear is the traditional mechanical expanding shoe type brakes which are also good considering the huge rear tyre it works on. Overall the bike has a neat assembly and the stopping power is more than adequate to stop it in faster speeds under sudden braking. The best part about the bike is that it remains planted even under harsh or sudden braking. We go to the extent of saying that FZ is the most planted bike in India under sudden braking. It almost feels as if it was a routine job, well done!

The Apaches have always been very nimble bikes and have been applauded for the razor sharp braking they have come equipped with. RTR 160 is just another extension of the same and the bike performs handsomely even in the braking department. Apache RTR 160 has two variants; one is the normal one and the other one is called the ‘Refresh’ which comes loaded with a rear disc as well along with standard front discs. And lest we said it, Apache remains the bike with the best stopping power and the bike with the best feel while coming to a halt. The fronts are loaded with a huge 270mm petal discs and the rears are also loaded with a 240mm petal discs on the Refresh model and normal drums on the regular model. Even the regular model was a pinnacle at the way the bike behaved while braking but the Refresh model has been a major advancement in the way our Indian bikes braked. TVS certainly seems to be leading the bandwagon as far as the braking is concerned whereas the Yamaha takes our points for the plantedness the bike shows under sudden braking, but just!

Performance & Fuel Efficiency: This is one area where Apache heavily outthrones the FZ convincingly. With a difference of almost 1.5 bhp, Apache is fast and definitely loves getting revved up. Once you sit on the saddle, it feels as the bike asks for more. With a lovely feel throughout the powerband, the bike never feels slow and goes all the way to the 125 Kmph mark on the speedo. The 0-60 dash comes in a fast 4.5 seconds and the bike hits the 100 kmph mark in around 15 seconds. The best part about the whole story is the feel and the adrenalin rush the bike instills in a rider which compels the rider to go that extra degree on the throttle.

Having praised the Apache so much, doesn’t mean that FZ is very slow. But because of a huge 140 rear section tyre and a little less power the bike remains short of Apache’s performance. 0-60 sprint comes in a tad over 5 seconds and the 100 kmph mark is caught up in over 16 seconds. But we must applaud the way the bike carries itself on high speeds. The fat 100 section front and 140 rear section tyre along with the Monocross suspension and a fantastic frame makes this bike one of the best handling machines especially at speeds touching 3 figures. In fact, sometimes you would only feel the speed when you see the speedo; it’s so very planted and smooth.

If we come to the city riding, than it’s the FZ which makes its way to the kingdom. With 14 Nm of torque under the belt, majorly distributed towards the low and mid range along with a lighter weight of 137 Kilograms, this bike is a breeze to ride in cities under busy traffics without giving you the hassle of changing gears frequently. The upright open chested seating posture of the bike also helps prevent fatigue and even on longer routes one feels comfortable and calm. On the other hand, Apache is also one of the most nimble bikes in the city which makes its way through the smallest of places with ease because of its compact size and lovely seating posture. A ground clearance of 180 mm of Apache also makes the monstrous speed breakers and earthen potholes craving for kissing the bikes bottom.

Despite being totally performance oriented the TVS Apache doesn’t let you down on the fuel efficiency figures. The bike returns very respectable mileage figures of around 45 kmpl in city riding and even more on the highways. These figures go along with a 16 liter tank capacity which means even longer tours in a tank full of gas. Yamahas have never been frugal and FZ just proves the same with fuel efficiency figures close to 40 kmpl in cities and upwards of 45 kmpl in highways. No doubt that the mileage figures are low considering the segment it is put in and the power output the bike churns out, but the overall designing of the bike is the primary culprit of the same. Fuel tank capacity is also just 12 liters which further make the matters worse on long and spirited tours.

Verdict: Now comes the all important pricing of the bikes which is so very important deciding criteria for most of our fellow Indians. With all the loaded features the Yamaha FZ 16 costs a tad over Rs 73,000 on the road in Pune and the FZ S costs a high Rs. 75,000 whereas the Apache RTR 160 normal edition costs over Rs. 66,000 and the Refresh version costs Rs 2000 upwards. Both the bikes have been a revolution in their respective departments. While the Apache has set new trends in the performance biking in India with some superb features, the FZ has been a revolution in the looks department with its super stupendous dazzling naked looks. Hence, it boils down to one’s own priorities and what one expects from the machine he wants to own. For the sake of giving away the glory, we would rate the Apache RTR 160 a tad over the FZ just because of the practicality aspect it commands. Apache has a gruntier engine feel, better braking, faster performance, zippy nature along with better mileage figures which go along with a price difference of over five grand. Summing it up, FZ is the bike for those who want to stand out of the crowd with the super sexy looks and who doesn’t mind paying those extra pennies for the sake of competing practicality and definitely for those who are Yamaha lovers. Apache RTR 160 is the bike for those who have speed and performance as the primary criteria for choosing a bike and then who minds those extra goodies offered!