A team of British engineers met in London this week to make the dream motorcycle which would be world’s fastest motorcycle. The team called Members of Angelic Bulldog Project met at the Institution of Mechanical Engineers (IMechE), Birdcage Walk, on Thursday 23 September to tell their inspiration story to public. 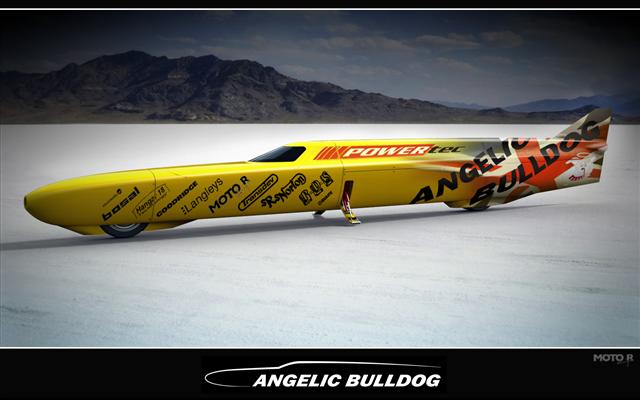 The actual purpose for the public meet was to raise fund. They need to secure £100,000 (Rs. 7.4 crore) for this project. There are total 50 engineers working on this project. The team of 50 engineers wants to develop a motorcycle which will break the speed barrier of 400mph (644kmph) and return the land speed record on two wheels to the UK for the first time since 1937. Currently the record is held by Chris Carr when he reached a top speed of 367mph (590Kmph) on September 24, 2009 on the Bonneville Salt Flats (Bonneville Speedway is an area of the Bonneville Salt Flats near Wendover, Utah, that is marked out for motor sports.

It is particularly noted as the venue for numerous land speed records.) The bike will be a streamliner and will have a groundbreaking supercharged engine of 700 bhp. The team expect to break the record in either 2011 or 2012. The bike which will run on E85 Race blend bio-ethanol if succeeds it will be travelling at an amazing speed of nine seconds per mile. The motorcycle would be streamliner

See the below video of the existing record holder, Chris Carr, as he reached a top speed of 367mph on September 24, 2009.

The team of 12 mechanical engineers is headed by chief engineer Jim Brown who is an active member of IMechE. Jim, a Chartered Engineer, gave up his job at Siemens Gas Turbines to devote more time on the project and is the only full-time member of staff. Located across the UK, the team has expertise from Formula 1, 24 Hour Le Mans, as well as other successful UK land speed record teams. This includes the IMechE sponsored Bloodhound Supersonic Car project, which will similarly attempt to break the world land speed record for a four wheeled vehicle in 2012.

He said: “The UK has a great track record in engineering which is so often ignored. We hope this inspirational project will help achieve global recognition for British engineering skills and talent. If we can do it we will be the first team to exceed 400mph on two wheels and reclaim the title which has been held by the Americans for the last 53 years.”

The project will utilise British design, manufacturing, engineering, products and services. It aims to restore Britain’s heritage of outstanding engineering achievements and inspire the next generation of engineers through its educational programmes. The project aims to raise the profile of British engineering and renewing enthusiasm for the subject among young people.