“With news of petrol prices skyrocketing to levels greater than that of Mount Everest, I would strongly urge we sell our Kinetic and buy an electric vehicle” thundered my dad over his breakfast. I looked at him as though he had just uttered a vulgar word, for I am and always will be a petrol head and would stand by the internal combustion engine until the last drop fossil fuel is squeezed out of the earth’s soil. 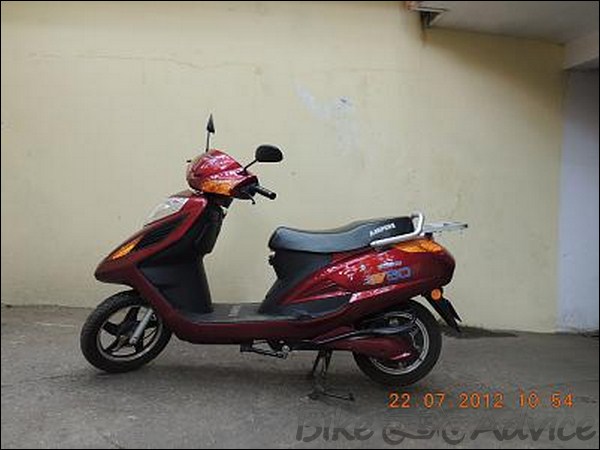 The next few days I tried to think of excuses such as getting a shock from the electrical circuit during rains so that my dad wouldn’t make a blunder. But before I knew it our family was a proud owner of an Ampere V60. A striking red a scooty like form stood in my basement and at once I abhorred its presence. I decided to stick to my bike and let my parents use the vehicle judiciously until one day my bike was to be given for service.

It is human nature to dislike change and I met the bike with very much the same feeling. Walking to the bike I inserted the key and a few lights flashed on the consol, immediately the battery level indicator rose to full and I was ready to go. No ignition, no kick start all I was to do was accelerate. Convenient I thought to myself as I carelessly twisted the throttle and the bike gently began to glide forward with an almost silent hiss that would only annoy dogs that heard such high frequency squeals.

Every Signal I stopped at I was greeted with a friendly Bangalore smile followed by the evergreen question “How much CC saar? How much mileage?” I was flabbergasted by this question because I honestly didn’t know. I went back home and ruffled through the instruction manual and here’s what I found out.

Well if you’re a science student I’m sure you know exactly what the 60v’s and the 250w’s mean. But to me it made no sense it just looked like reading the back of a plug point. So let’s look at some of the features of this bike from the eyes of a common man. 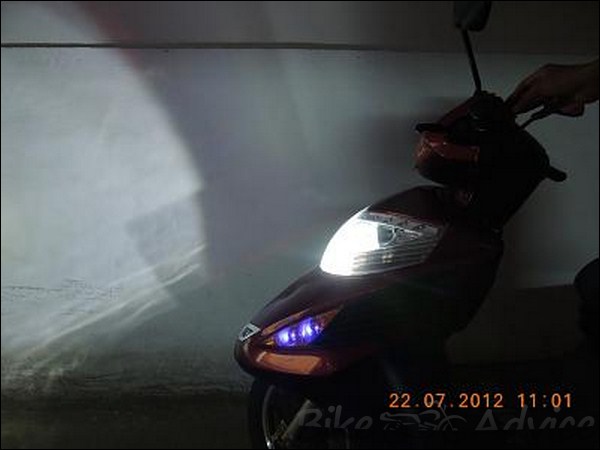 The bike has an unusual liking for LED lights. As soon as you turn your head lights on the face of the bike lights up like the UFO’s we see in Alien movies. I do not really see the purpose of those lights as they make a very ordinary looking bike extraordinarily hideous and mind you ordinary is good. 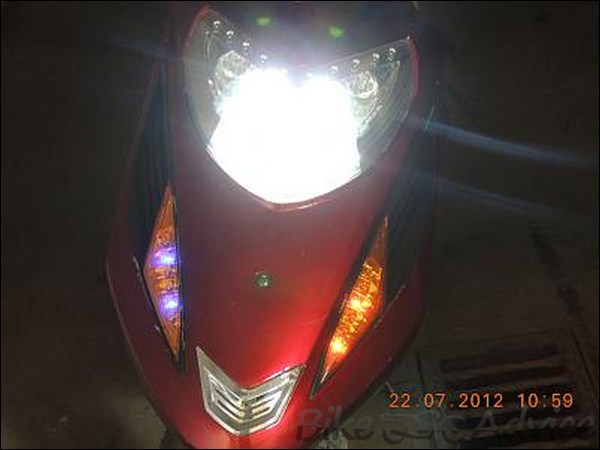 They have fitted it with a white head light which is powered by LED bulbs. Surprising how something that consumes such less power can illuminate the road very adequately. However this seems to work only in high beam as in low beam the light is almost as good as switched off.

There are indicators on either side of the handle bars and the back of the bike which are well positioned and apt. On the contrary it can be noticed that the controls for all this on the handle bar are placed a tad bit too far for the normal human thumb to reach which makes it quiet inconvenient as you have to look down every time you wish to turn or make noise at fellow riders.

When you make market trips you realize you require a hook to latch your bags to. Yes they have thought of that don’t worry, but then u realize it is as useful as your appendix cause the hook is just too small to fit any bag with handles bigger than a few microns. If this hook were to be made a little bigger or if a retractable hook similar to the one provided in a scooty were placed it would do a lot better. 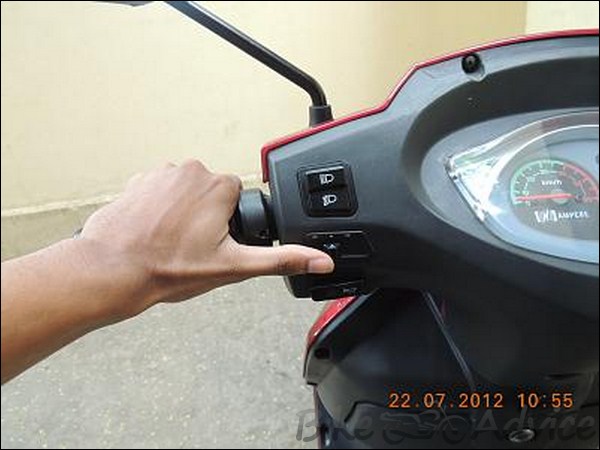 There is however a carrier on the back of the bike where you may place and fasten luggage with the help of strings. But this I’m not sure would assist the vehicles performance. There is also a very spacious under seat storage due to the absence of a petrol tank and this can easily fit a full size helmet or even a moderately sized bag.

Later you decide to have a friend over and show him the bike and he says let me ride it. Its then that you realize they somehow seemed to have forgotten the rear foot pegs. In a design that is inspired by the Honda Dio where the pillion mounts their foot on the riders thighs I find it highly uncomfortable on the makeshift footrest molded into the body of the bike, especially when u have a slightly older person sitting on the bike.

The bike surprisingly sports a step up seat which is commonly found in race bikes or zippy street bikes youngsters buy. This is slightly uncomfortable especially if you’re going down a slide every time the vehicle breaks as they are placed in an unusually inclined angle. The bike sports a common set of drum brakes. 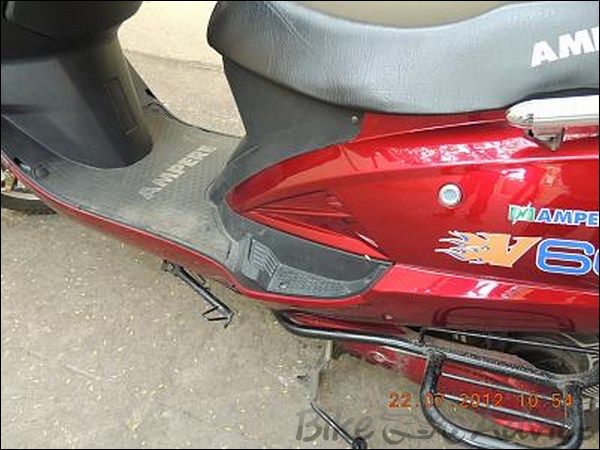 I guess Flintstone would have occasionally felt at home with them because I sometimes found it necessary to use of my footwear to bring the vehicle to a halt. Then there is the suspension which is a tad too hard for India roads. Every time you went up and down a pot hole you were at the threat of having a slip disc.

So this then you must be wondering is a terrible bike, but you’re wrong. It is in fact really good. You may curse when old ladies in their scoterettes over take you or when your friends in their Yamaha’s and Dio’s do doughnuts around you. But in the mad rush of Bangalore traffic where you’re stuck between 15 and 20 kmph.

A top speed of 48kmph suddenly sounds godlike. You might not reach your destination earlier than others but you surely aren’t going late. You don’t need a registration cause its RTO certified and not required. You don’t need Insurance and no more petrol bills that run to pages.

Imagine that smirk you can have on your face when you reach work at the same time as someone who jus burnt 100 bucks worth of fuel to get there when what went out of your pocket is enough to buy a Cadbury Perk. Now you are suddenly filled with a sense of green as there are no emissions cause you can feel plants pop out of the soil and sprout leaves as you pass by.

You don’t need a helmet to ride one of these and cops can’t catch you for a lack of one either but wearing one for safety is recommended. You fully charge it and it goes around 60 kilometers. It’s light enough to be picked up and parked conveniently while simultaneously heavy enough to stand in a strong wind. 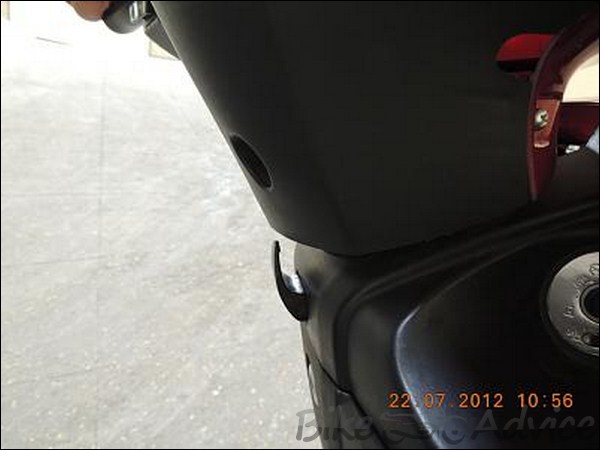 Its got a side stand and a center stand and is priced around 45,000. This now somehow seems to be a serious competitor to the gearless commuters. So I the self claimed petrol head would definitely recommend this bike if it had better brakes, suspensions, a more comfortable seat and rear foot pegs. So if anyone from ampere happens to read this you could give yourself a pat on the back a job well done.

Should you buy one?

If you plan to use it as daily commuter to your place of work or college which is at least 10 to 15 kms away and you do a fair bit of travelling throughout the day then I wouldn’t recommend it. If you wish to use it within the city for short market trips and so on yes definitely the best buy.