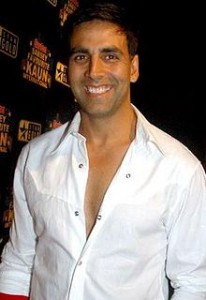 There are reports that Akshay kumar has recently inked a deal with a Honda worth Rs. 50 crore. According to this deal Akshay Kumar will remain brand ambassador for the Honda motorcycles for five years. This is one of the biggest deals in Bollywood and snatches Rs. 10 crore a year for Akshay Kumar, he recently did a comeback with his super hit film Housefull 2, after his toughest career phase.

Bollywood apart why we are interested in the news is because of association with Motorcycle Company.  There is no such official announcement which motorcycle company has endorsed Akshay Kumar but there is a high probability that it is HMSI (Honda Motors and Scooters India ltd). The reason why we believe the same is because of Honda’s plan on its Brand makeover. Earlier it was reported that Honda is going to spend Rs. 100 crores for its mass media campaign which is going to start with the launch of Honda’s upcoming motorcycle Dream Yuga. The company identified two personalities one from bollywood and one is cricket. However the company intended that it will go with one brand ambassador only. Now, this is a clear indication that the company has already identified brand ambassador, as Dream Yuga is going to launch on 15th May.

Further, Amir Khan is associated with Mahindra two wheelers and Salman Khan has now associated with Suzuki Motorcycle. Hence, there are much more chances that it is Honda only. Also the announcement of signing deal and launch of Dream Yuga is happening together. However, as there is no official announcement from the company we cannot say anything as if now. Let’s see who become brand ambassador for Honda?