ABS and After Market ABS in India – Explained in Detail

As we all know in layman terms that ABS which simply means Anti-Locking Braking System will prevent the rear or the front wheel or both in some case from locking up which if fails, ends in a catastrophic disaster. As the ABS scene in India seen recently is available in only two bikes within the 250cc category one being the Honda CBR 250R and the other in TVS Apache RTR 180, what are the options we are left with for the bikes that we use on regular basis that is equipped with disc brake set-up? Before we dive into the available options in the local market off the shelves, being a deep dive session, let’s see what is ABS first. 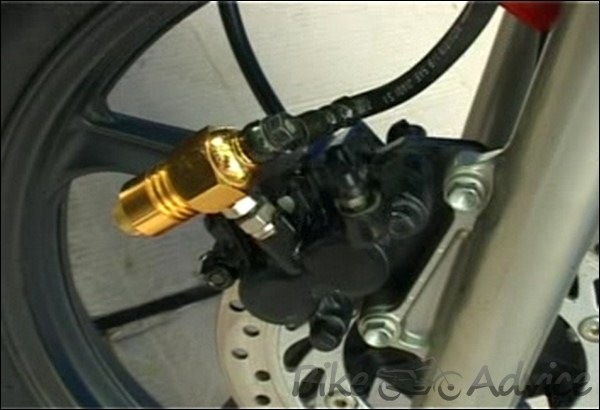 ABS, Acronym for Anti-locking braking system, is a complex technology in a motorcycle or a car that can help reduce the speed or stop the vehicle in an emergency situation without locking either of the two wheels or even all the four in case of cars. This is achieved by using speed sensors that is attached to the wheels that continuously monitor the wheel rotation speed and sends the data to the braking ECU which is in turn connected to the hydraulic unit that adjusts the hydraulic pressure of the brake fluid inside accordingly. All these are carried out without a fuss which momentarily reduces the excess brake pressure applied by the rider enabling the wheels to sill rotate continuously in spite of the hard braking and all these happens in less than a wink of an eye.

In short motorcycle ABS works by constantly measuring wheel speed with the help of sensors attached and adjusts the brake fluid pressure. If the wheel speed sensor detects that a wheel is about to lock itself, the pressure on the hose is reduced by a complex algorithm running on various on-board electronics that takes care of the wheel locking part. During a normal ride, the rider wouldn’t notice all these complexity of the functioning of various components involved in the ABS system. However in an emergency braking situation which is otherwise panic braking, one can be confident that the wheels wouldn’t lock up giving the rider a taste of the tarmac. 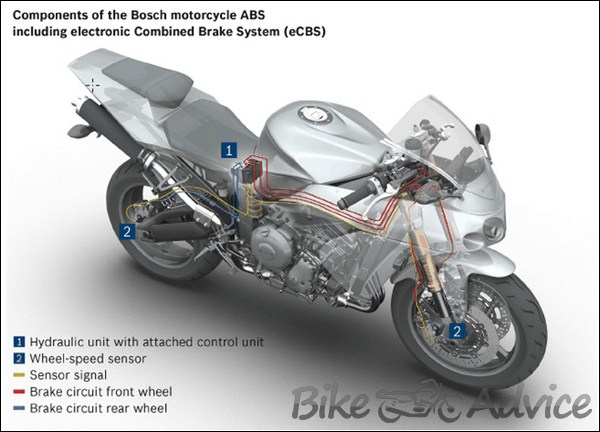 The answer is yes. But there are certain hitches in that too! As India being a mass commuter two wheeler segment market, no manufacturer will come forward to produce the ABS system according to the tailored needs of each motorcycle. So, it’s better to buy a motorcycle that has factory fitted ABS system which would have been tested rigorously by the motorcycle manufacturer as an integrated part of the motorcycle itself.

So what are we left with?

These are the options that we are left with;

Mechanical ABS Systems? What are they?

In the Electronic Version of the ABS system that uses a lot of sensors to overcome wheel lock-up, the Mechanical ABS on the other hand is simpler in construction and as well to understand their working. In mechanical ABS, the entire unit designed houses a valve which modulates the braking power taken over by the brake fluid by simply relaxing the pressure that goes to the piston from the caliper. In simpler terms: the excess pressure applied on the lever which in turn travels through the brake hose is reduced by the mechanical unit that site between the hose and the caliper. The same is achieved by a series of pulsating effect that slows down the wheel lock-up time. 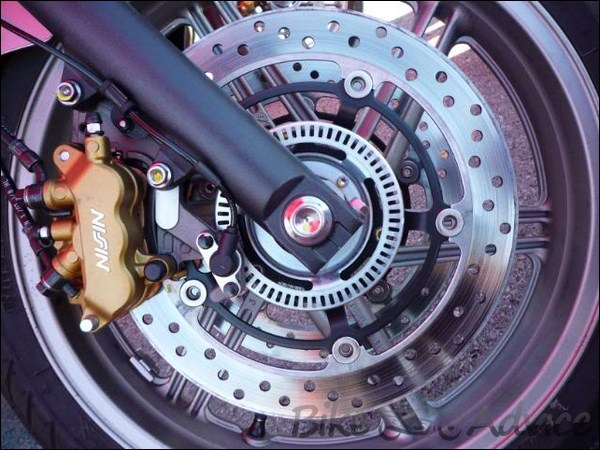 The bad news; there are plenty of Chinese copies available in the market for as low as 400 rupees, be assured that it is as good as stock brakes minus ABS. The Good news is that an Indian company that manufacturers these unit under the name of SaferideABS has made quite a stir in the braking segment with their mechanical systems that are available for sale from them directly.

The more good news is that SaferideABS can be installed in almost all the motorbikes manufactured in India except a very few which has been listed in their site for reference purposes.

Got it. Now What?

The installation also has been kept simple in mind that one can purchase the same, go to any workshop or an Authorized service centre who knows the basics of disc brakes and get it installed in a clean way. For bikes in warranty the installation of the same mostly will not void warranty as this doesn’t require any splicing of wires or modifying any OEM part. For Do-It-Yourself guys, there is also installation procedures listed in their website for easy reference. The only thing one needs to make sure and take observations is that there shouldn’t be any air bubbles in the hose that can lead to a very inconsistent braking performance that can never be relied upon not only with mechanical ABS, but even with those expensive C-ABS kits. A proper brake line bleeding will solve the inconsistent braking issues faced.

Once the installation is carried out in a healthy way, the only things one need to worry about is that one should not pump the brakes as this causes excessive reverse pulsating effect that eventually causes jerks, additionally the rider may also experience a rapid pulsation of the brake lever caused due to the excess pressure traveling backwards which would feel almost like the brakes are pushing back the leg or the hand when applied which is pretty normal and the same feedback can be used to assure that the mechanical ABS unit is functioning properly.