I am Dhruv Panchal from Ahmedabad and I am passionate for riding bikes. I recently got my new Yamaha Fazer on 30th November 2009. Color I have chosen is flaming orange and you won’t believe, it’s really an eye catching beauty. Let me first share some idea about sport-touring bike. 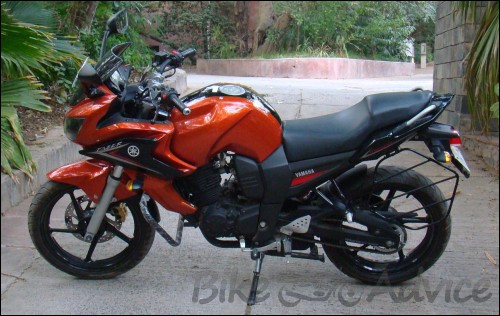 A sport-touring bike is a type of bike designed for long-distance touring and heavy alteration of tracks. Although any bike can be used to tour with, designers have brought specific modifications designed to address the particular needs of riders. Common to the touring bike models is usually large displacement fairings and windshields (to offer a high degree of weather and wind protection and to distribute the air stream aerodynamically), large capacity fuel tanks (for long ranges between fill-ups), engines offering lots of end power, and a more relaxed, more upright seating position than sport bikes. 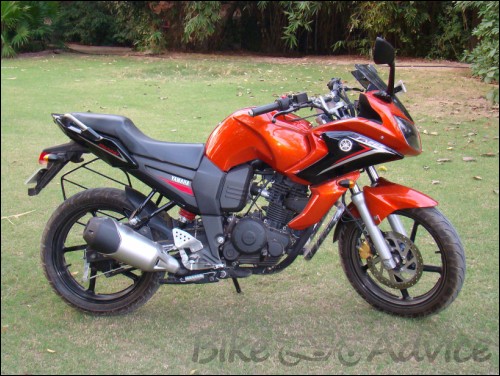 These are straightforward, versatile bikes that are not too specialized for one task, but don’t excel in one area either. Standards are used in touring, commuting, and sporting, and are good for beginners. The rider enjoys the benefits of freedom of head movement, good visibility in all directions, and easier use of the feet while moving through stationary traffic.

Now let’s get back to the subject… Yamaha Fazer. Bike dynamics is the science of the motion of vehicle and its components. Bike motions of interest include balancing, steering, braking, accelerating, suspension activation, and vibration. Further more, Bike dynamics includes all about Handling, Road Holding, and Vehicle stability.

By this, we mean the ease, style and feel with which the bike does our bidding. It depends mainly on overall geometry, chassis stiffness, weight distribution, tyre type and size. It may come as surprise to some people to learn that the rider has a major influence on the handling characteristics of the bike. Rider responses have a large effect on overall interaction of the dynamic forces that control the motion of the machine.

This means the ability of the machine, through its tyres to maintain the contact with road. It depends mainly on tyre type and size, suspension characteristics, weight and its distribution, and stiffness between the wheels to maintain their relationship with one another. A big enemy of tyre grip and hence road holding is dynamic variation in the vertical load at the road interface, there are many factors contribute to such variation.

There are many types of stability and instability that can influence the bike. There’s balance stability, aerodynamic stability, etc. Formal definition of stability is the ability to maintain the intended maneuver (i.e. continue in straight line or round or corner) without an inherent tendency to deviate from our chosen path. This implicitly includes the absence of wobbles and weaves.

You all are aware about uniqueness about Fazer, but I want to present some of them according to engineering terms. So let’s take a look to some exceptionality of Macho Machine, Fazer.

We all know that aerodynamic force has two components…Lift and Drag. Lift has not the major influence on bike because of less area available at bottom. The main factor is drag….a designer always tries to decrease drag in each automobile and it becomes too difficult in the case of two wheelers as the driver itself is the frontal area on which the drag force is going to act. So Yamaha has designed a huge (In the scene of height and width) front fairing aerodynamically which slashes the air in various streams. From these streams two are deflected towards sides of the bike “1”, one to move above the driver’s head “2” (You can feel it by keeping your hand over windscreen at 70 KmPH.) and other towards engine “3”. 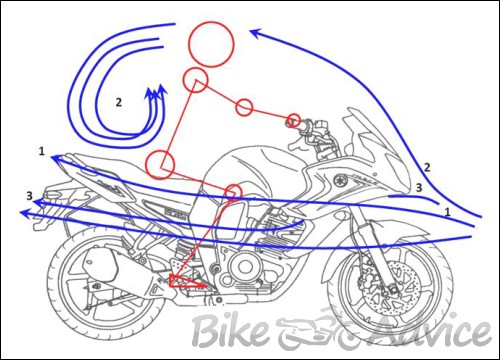 Width of front fairing is designed such that the driver’s legs can’t exude throughout of it (excluding some extreme cases) which gives smooth flow to the air stream. Another example of perfect aerodynamic design is the black spot arises at the tip of the rear. (Tip above the logo of Yamaha at rear) This spot arises after some running of bike just because of friction between air stream and body.

Another force from wind is side force. The side force produces a torque tending to make the bike fall over away from the wind, to retain balance it is therefore necessary to lean the bike into the wind. Under these conditions, the weight of the machine now acts as important factor and produces a torque which balances that from the wind force. As the big Center of mass is located near the engine in FAZER, the leaning of bike becomes so easy and controlled. So ideally it’s a combination of some conflicting requirements.

Ergonomics is the study of body posture, and the positioning of instruments, to create a good human-to-machine interface. “Good ergonomics” refers to how well a bike fits a rider for its intended use. Motorcycle riding positions range from the Cruiser to the Standard, and all the way forward to the Racer. Every bike you can find will be set up at some degree between these positions. As Fazer is the touring bike, it is having the seating position in between racer and standard. The rider leans forwards slightly. The feet are below the rider, not too far to the front or not too back. Seat height is 795mm which is good for almost all drivers according to their height. Below is the possible riding posture for Fazer. 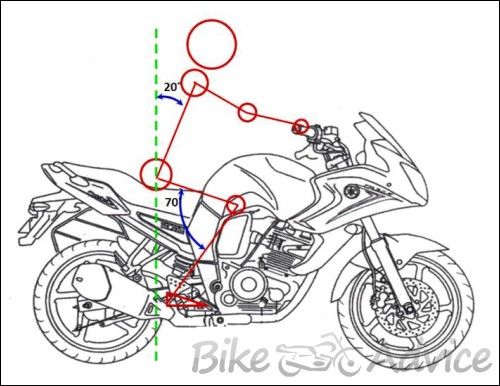 One ergonomical problem with FAZER is about pillion seat. It’s not about uncomfortable but the slop given to pillion seat towards front is slightly higher because of which the pillion passenger could be skim on driver at the time of braking.

Steering geometry is the collection of key measurements (lengths and angles) that define a particular bike configuration. Primary among these are wheelbase, steering axis angle, fork offset, and trail. These parameters have a major influence on how a vehicle handles. Fazer has 1335 mm of wheelbase which is in the best range (1100mm to 1600mm) for touring bike. Wheelbase has a major influence on the longitudinal stability of a bike, along with the height of the center of mass of the combined bike and rider. In accordance to longitudinal stability, Bikes having more wheelbase (Cruiser Bikes) are difficult to balance in moving condition while short bike (City Bikes) are difficult to balance in stationary condition. Fazer has the moderate wheelbase which gives both benefits. 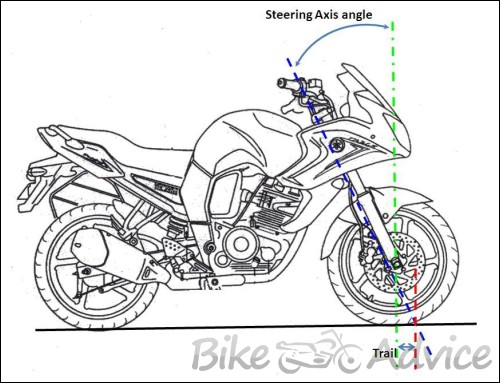 Next terminology is Trail, which is the horizontal distance from where the steering axis intersects the ground to where the front wheel touches the ground. Trail can also vary as the suspension activates. As telescopic forks compress due to load transfer during braking, the trail and the wheelbase both decrease. Trail directly changes the amount of wheelbase and decides the ability of bike to steer. Touring bikes are built with small trail to allow the rider to control a bike weighed down with baggage.

As a consequence, an unloaded touring bike can feel unstable. As we know, Fazer is a modification of FZ which has 101mm of trail to make the bike stable in unloaded condition as well as in city traffic. Another benefit of moderate trail is…the contact point of tyre with road surface is always remains behind the intersecting point of steering axis with road surface. So finally the Center of Mass for steering system always remains in front of the steering axis, which helps to steer the bike in the direction of a lean. Next unique improvement in steering system is Drag type handle bar which is nearly straight across to create a forward-leaning and aerodynamic riding position. It also provides ease to turn the bike.

Many people don’t know that their bikes are not fresh piece. Each vehicle is tested on special track for squeak and rattle testing. The major rattles and shocks are absorbed by suspension systems. Fazer has robust front suspensions having 41mm diameter for inner tubes and 130mm travel in max conditions. It doesn’t allow transmitting the sharp shocks even at 75KmPH. The max travel of 130mm doesn’t changes the position of center of mass of steering system, and always allows the smooth turning in the direction of lean as stated earlier. As we all know the benefits of 7 step adjustable, rear mono-cross suspension, I am not listing them here.

Tires are always remain in loaded condition ever your vehicle is stationary. Main forces acting on tires are listed below.

So, tyre designing is not an easy job for designer. Yamaha has designed the best tyres for FZ series. Many people think that the rear wide tyre is just for look…it is only a humble thinking. The main purpose for having a wide tyre is best stability at higher speed and worst road surfaces, better weight transfer in braking and acceleration as well as turning. 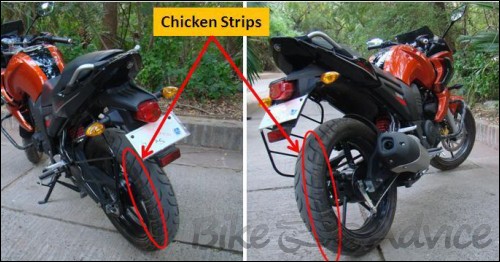 The main disadvantage with this wide tyre is chicken strips. As shown in photograph, the two side portions of the tyre are remaining almost unused because we are not habitual to tilt our bike too much while taking turn. These strips are known as chicken strips. The middle portion which is used mostly, gets wear after long run while the side strips remain unused. This condition leads to splitting of tyre and also up to burst… But who cares about this long term fatigues. I mean, the benefits from this wide tyre are incredible.

A 267mm diameter Disc brake having two piston caliper at front….a perfect component to stop this macho machine within 6 to 8 meters at 70 KmPH without lifting rear wheel. The rear drum brake is not too effective at higher speed. Driver has to remains reliable only on front brake. The optimized design of front disc gives excellent balancing and heat dissipation.

It’s really a good machine for new comers and those having extensive travelling, if you don’t care about mileage of 40kmpl. You will find all the features like performance, ergonomics, aesthetic and “X” factor also. I think Yamaha was out of its track during last few years. But now they came back with some performing beauties and doing excellent.