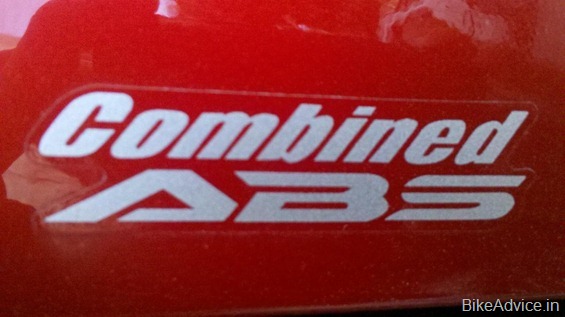 Looks like the new government is taking the issue of road safety in India pretty seriously, finally! After raising some strict directives for four wheelers, they also have their focus on two-wheelers, the most vulnerable entities on the roads.

It must be known that India has one of the highest mortality rate due to road accidents.Things seem to taking a good turn now. As per a report published on Economic Times, the Ministry of Road Transport and Highways is working on a memorandum which will make Antilock Braking System (ABS) compulsory for two-wheelers.

Initially though, the move will be limited only to two-wheelers with larger engine displacements. With time, the entire two-wheeler industry is to be brought under the umbrella of this safety net.

ABS prevents the locking of tyres under panic/hard braking and prevents a vehicle from skidding out of control, both on dry as well as on wet surfaces. It also reduces the braking distance. Currently, in India we have motorcycles like Apache RTR 180, CBR250R (optional), Duke 390 and RC390 etc which offer ABS.

This easily explains how ABS prevents accidents. Click on the pic for more info

Making ABS mandatory across all the motorcycle segments should help prevent a lot of accidents, in turn making our roads a lot safer. Manufacturers, so far have ran away from their responsibilities citing the country’s (lack of) norms as the reason. However, we will love to see this law enforced as soon as possible.

Prices may undergo a minor revision but I am sure responsible countrymen will not mind paying a little extra for their own lives. And for the rest, there will be no other options 🙂