What you see here is a 700cc Royal Enfield V-Twin constructed using two 350cc top ends. The whole bike appears to have come from the factory, or maybe the “special vehicle operations” section, instead of the mind and work of a creative and determined owner. 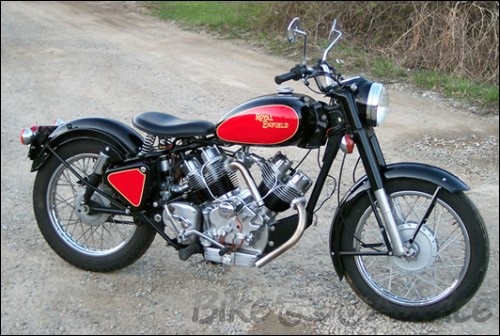 Aniket Vardhan, the builder, still wants to come up with a better exhaust arrangement, than short open pipes, but already, the bike looks fantastic. Aniket calls the 700cc Enfield V twin, “The Musket”, to keep the vintage gun (a.k.a. Bullet) reference alive. This is very impressive work. I have to admit, when I watched the videos at the end of this post, I just started smiling and kept smiling all the way through. I really like this bike! 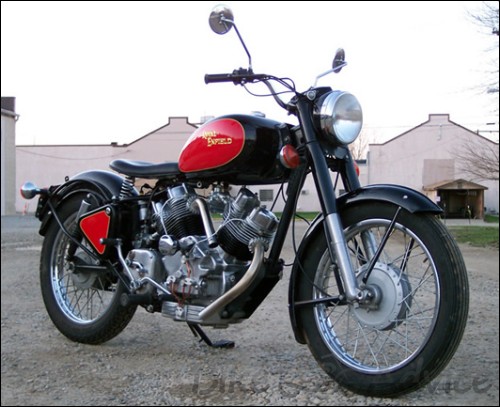 When you read the story of the build, take note of the process, …he had an idea and over many years kept at it, continued learning, continued working, he just kept going until the idea became real and he was riding this bike down the road.

I was born in and lived in Delhi, India till 1999 when I came to the USA – ostensibly for a Masters in Industrial Design, but here’s the dirty truth- I came because of the sound of a Harley Davidson. Saw one once in Delhi, long ago, belonged to some filthy rich type, heard it start up and rumble away, wet myself publicly and resolved that one day, I would visit their homeland.

That didn’t seem likely at the time I was studying architecture in Delhi so the next best thing was to see what I could do with my Bullet, dearly loved as the only real motorcycle available in India back then (and perhaps even now). Thats when the idea was sort of baked into my brain, in the heat of 115 degree Delhi summers, over cigarettes, the smell of steaming cow dung and chats with biking buddies in the college cafeteria. I would build a V twin Enfield- it should feel right, with its long stroke, heavy flywheel, beautiful cylinder and head. Looked for any and every book I could find on vintage motorcycles, V twins, engine design, metal casting, machining- all of it. Bought an old enfield engine to use as reference.

Jump ahead to 2002. I did in fact find myself in the USA, now an industrial design faculty member at an art and design college. On a trip to Delhi in 03, I picked up my old engine and brought it back Began to work on the idea on weekends, sketching, 3d computer modeling, measuring all internal parts, figuring out how to make the whole thing work using only standard enfield parts. You guessed it – came across the Norcroft V twin Enfield online, sort of destroyed me for a week. Then I figured, this is sort of fun anyway, so lets keep at it. I guess a couple more years passed, about 18 developments of my CAD model later, I was ready to start building patterns, and then, what do you know, the Carberry comes to my attention! By now, I was beginning to suspect that my next door neighbors were working on an Enfield V twin as well. As you’d expect, after a month of depressed moping, it was back to the basement again and I also noticed that my approach was rather different anyway, so why not put forward the way I thought made sense to me? Here is my rationale:

1. Keep it as ridiculously simple as the original Bullet engine. Therefore, no modern updates to major engine internals, so it still has the stock tappets, no hydraulics, and the stock piston oil pumps. Vintage bike lovers really like to tinker and tappet adjustment is almost a religous ritual for many.

2. Improve the oil filter – I machined a new filter housing which uses a standard modern cartridge type filter available at Advance. This is not a screw on car type filter – that doesn’t look right, so I have a finned aluminum housing I made.

3. Aesthetically, and this was very important to me being an industrial designer- keep the “vintage” and “Enfield” cues strong. I thought I would pick up from the last Enfield big twin- the Interceptor. The rounded profile of the front of the crankcase and pleasingly smooth and gently radiused forms of the castings and the cooling fins on the side of the wet sump. A wet sump simplifies matters and also ties in with the last Enfield big twin- the Interceptor Mark 2, which also had a wet sump.

4. I love the external copper oil pipes that are such beautiful visual elements on vintage engines, so I decided to incorporate that as well. This also helps to keep the oil cool as it travels through them, exposed to the air.

5. Keep the frame mods to a minimum and again keep the “vintage” feel going by keeping the single down tube- the Enfield big twins of yore had single down tube frames and handled well. The look of the “vintage V twin” I think is the very simple and elegantly “cradled” engine between two tubes- front sloping forward and rear sloping back.

I ended up quitting my teaching job last year, was getting the feeling that my heart was in projects like this. Since I wasn’t a machinist, I had to learn that too. This is where the stars lined up – a student’s family business is a machine shop close to my home, and his dad, Mr. Boggs was sufficiently amused by the project and my excitement to allow me to come in and start working on my project, early last year.

Well, it took about a year for the machining to get done, I learned everything as I went along and here we are. I have skipped all the “oh darn!” moments but there weren’t too many, just one huge one, when the first foundry I went to pretty much destroyed my patterns built over 3 years by leaving them near an open window in the rain…still get stressed out when I think of that- had to cut away and repair the whole thing after a couple of months of very evil thoughts. 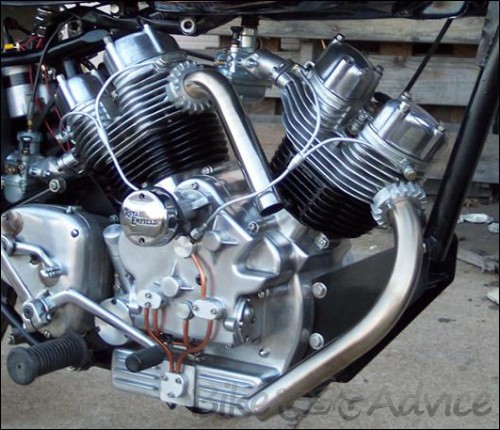 But…the holy rider in the sky must have smiled upon me because from the very first firing, it runs like it WANTS to! It starts first kick every time! It isn’t quite as explosive as my 750 Triumph Bonny, but it has the very mild Bullet cams and stock 7:1 compression and small carbs, so a healthy increase in output can be expected with the usual mods. But, the torque is really lovely- cleanly pulls top gear at around 20 mph! and accelerates from there without any snatching! I’m keen to try the new 5 speed gearbox the new Enfields have – my old one has 1-2-3 really low and a huge gap to top. My final ratio is 4.22 to 1 right now and she feels like she could pull even taller.

The amazing part is that its SMOOTH! It shakes much less than my Triumph and I think less than my old 350 single engine! That second piston is really helping to cut the vibes. The sound? Beyond my wildest dreams, from those baking hot summer days in Delhi, ten years ago.