When I and Deepak thought on what should be the next bike we are gonna review for BikeAdvice, both of us were clear that it has to be the 2011 Karizma ZMR. 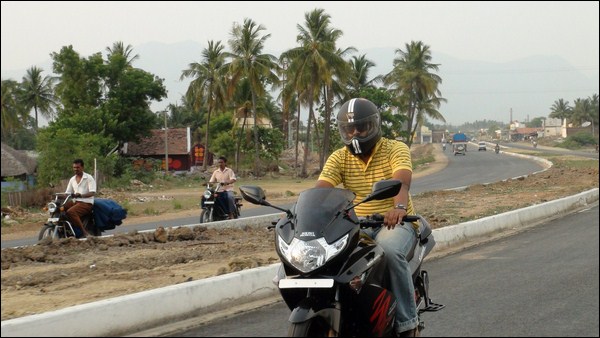 Let me begin describing this big looking bike. The moment I saw this bike in BikeAdvice office, I just went crazy on just taking a look at its paintjob. Unbelievably metallic, it was. What a glossy finish! The bike literally shines when placed under hot sun. I’ve never even seen cars having paintjobs like this.

If at all a lame man who knows absolutely anything about any bike decides to get a bike delivered, he would book a Karizma ZMR, just by getting impressed by its paintjob. 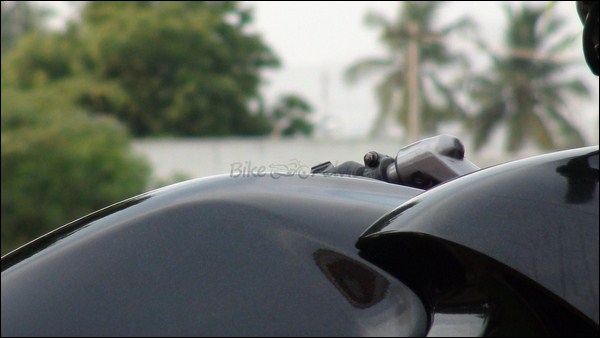 I can still feel the metallic effect. We tested a black Karizma ZMR. What puzzles me is that this metallic effect is visible only in this black coloured one or in all colour schemes of ZMR. Other colour users please answer this small query from my side.

Firstly, this bike is really huge in size. Resembles a fighter plane? Oh well, yes to a certain extent. But, I always had a doubt. Why is the Karizma ZMR so damn big? 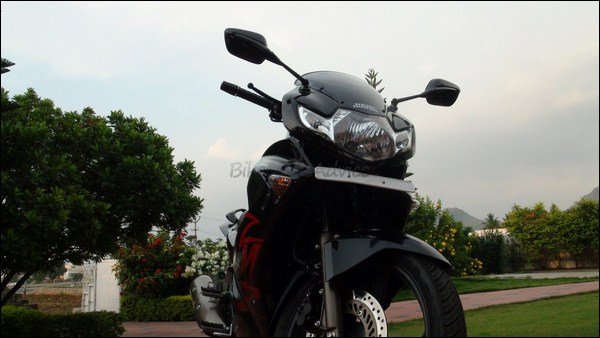 What is the purpose of its bigness? But, for a tall guy above 6 foot and a few inches, this bike would be a kind of tailor suited among all the bikes in India.

The ZMR is more or less the old Karizma R with a big body cowl added onto it (and of course with a few other changes). By big, I really mean big. It occupies the major area of the entire bike. The turn indicators are embedded onto it. 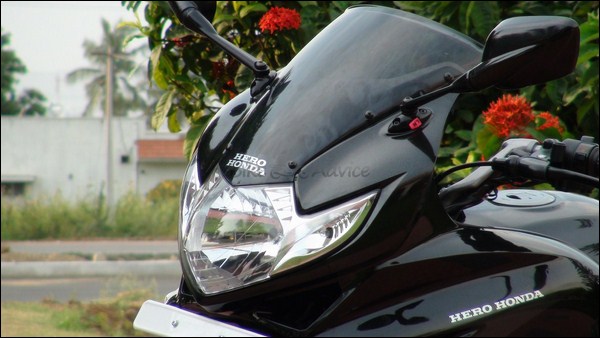 This fairing is the actual style quotient for this XXL sized bike. The big ZMR sticker adds to the gorgeousness of the bike. This sporty full body cowl also houses the body coloured rear view mirrors. This is the new feature added up to the 2011 variant of Hero Honda Karizma ZMR. It is an eye catching part in the bike as well.

The Best, I would say. If at all you want to see an even better looking instrumental cluster in an Indian bike it is in the hand of Hero Honda only. An amazing piece of work I would say. Just turn the key on and The Karizma ZMR displays ‘Hi Welcome on board the Karizma ZMR. Fasten your helmet and fly safe. Bon Voyage.’

Turn the ignition off and the cluster displays ‘C u soon.’ The best part here is the fact that this message can be customized. The blue illumination makes the cluster really comfortable to be read during night drives. A set of 2 tripmeters, a tachometer, fuel meter, speedometer and of course like all new bikes, it sports a clock as well.

The styling factor is what differentiates this bike from its other counterparts in the market. It is neither a Sportbike derived design nor a Tourister derived one. It is a new design language which really blends both these purpose of riding. 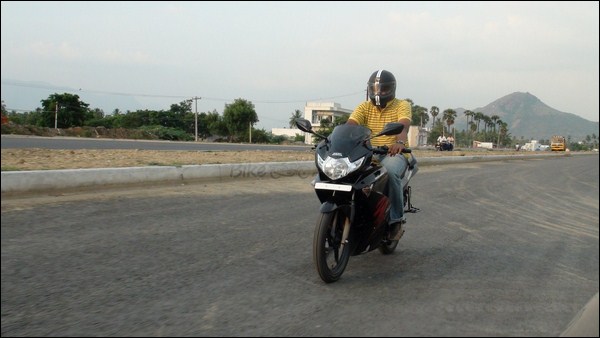 The Karizma R is very popular among avid bikers as a bike that is best suitable for Touring. This bike being a successor of the former, doesn’t ditch people in that aspect. Its styling supports it to be a fantastic go-tour bike. Nay, a sporty go-tour bike.

This is the area of concern when it comes to reviewing Hero Honda bikes. The front tyre sports a 276 mm diameter disc and at the tyre, it is a 240 mm diameter disc. But the braking is again not so damn precise, as against many of the other bikes in the market. 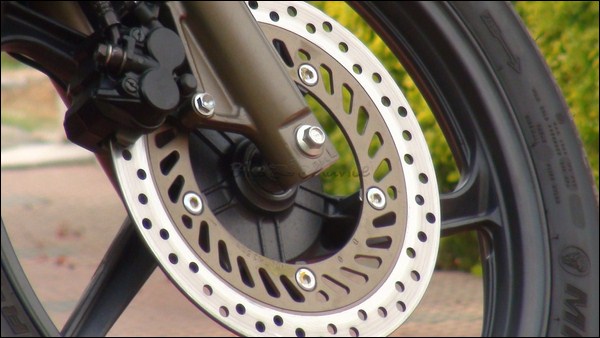 I expected sharp braking effect which this bike failed to provide me with. Aesthetically, both the front and the rear discs are Astra gold touched making it a noticeable feature and is really a good move from Hero Honda. 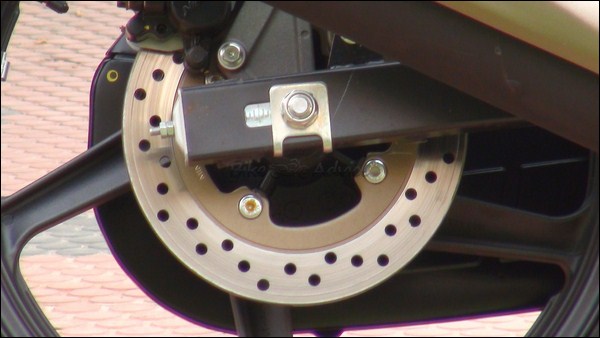 The Karizma ZMR is equipped with Telescopic Hydraulic Shock Absorbers in the front and the Hero Honda’s flagship Gas Reservoir Suspension at the rear. 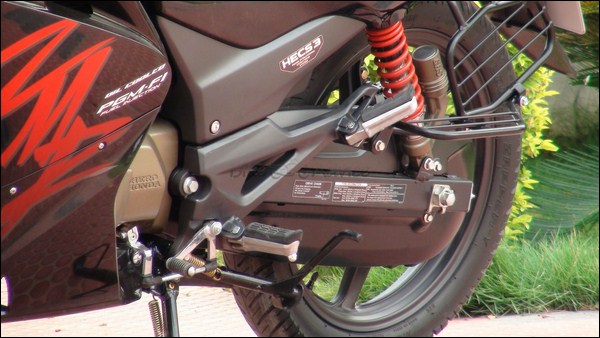 It comes as a boon when this bike is taken for a spin on the highway and when off-roading it. But, why would you do that? 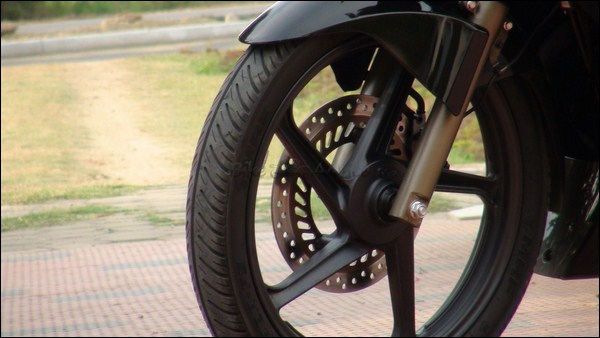 We have absolutely no regrets when it comes to the suspension of Karizma ZMR.

Engine and other Mechanicals

Karizma ZMR sports an air-cooled, 4 stroke, single cylinder engine. The displacement capacity is 223cc making it the bike with the highest displacement in India till before Honda CBR 250R’s launch. The bike is capable of producing a maximum power of 13.15kW @ 7000 RPM and a maximum torque of 18.35Nm @ 6000 RPM. 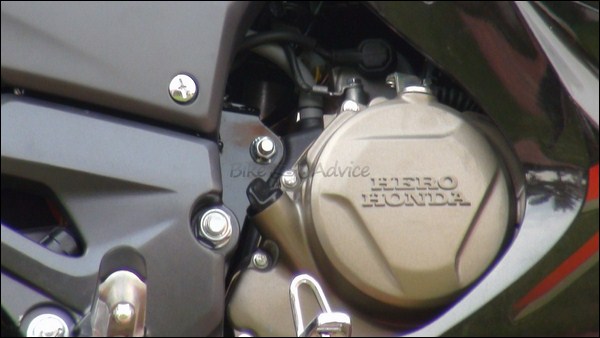 However, for its price, the company could have provided a liquid cooled engine. I wish, the next generation Karizma sports one such engine. But the oil cooler solves the problem of engine overheating, which a tourister kind of bike should never experience. The bike has a multi plate wet clutch with a five speed gear box. 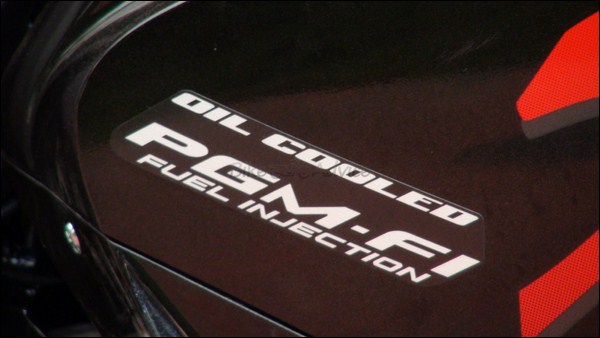 The bike sports a PGM-FI, which stands for Programmed Fuel Injection. This ensures that Karizma offers decent fuel efficiency, despite its large engine displacement. 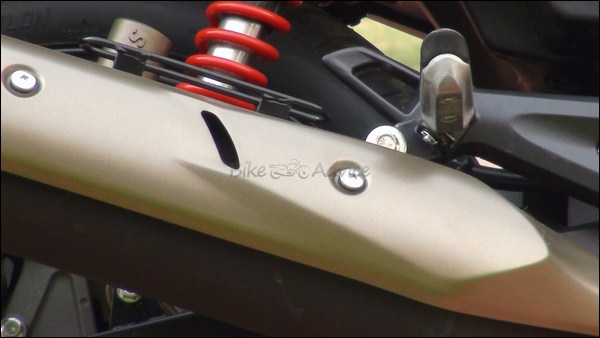 The 12V, Multi reflector Halogen bulbs in the headlamp gives us the confidence to ride in nights without any fear. The tail lamp is fitted with LED lamps making it look great at nights. The electric start is not a kind of feature touch as we had mentioned while reviewing Hero Honda Hunk. But that has got absolutely nothing to grumble about.

As with the case of other Hero Honda bikes, this bike also does not house a basic ‘Engine Kill Switch’. I could not come up with a proper reason why Hero Honda engineers are not concentrating on this small switch at all. 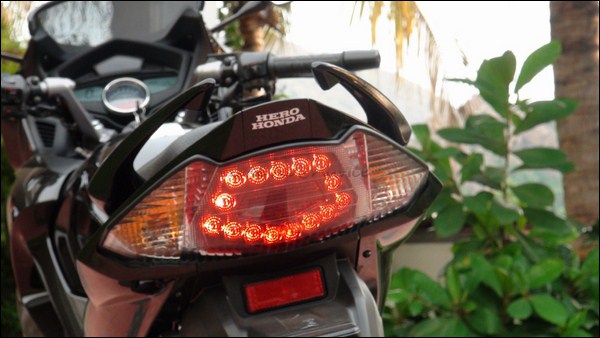 First thing I want to tell you here is the fact that touching 100 kmph mark is absolutely a cakewalk for this bike. No struggles to do that. The initial pick up is almost close to excellent. The riding position offers good support to the back; highly suited for long rides. Though, the distance between the seat and the clip on handlebar is pretty large and one has to stretch a little, it is still fine.

This bike is almost 30kg heavier than the Yamaha YZF R15. This makes it slightly difficult for new users to handle this. Karizma ZMR enables pillion riders to have a comfortable journey at times of long drives. So it is a big nod for this bike from pillion riders too. 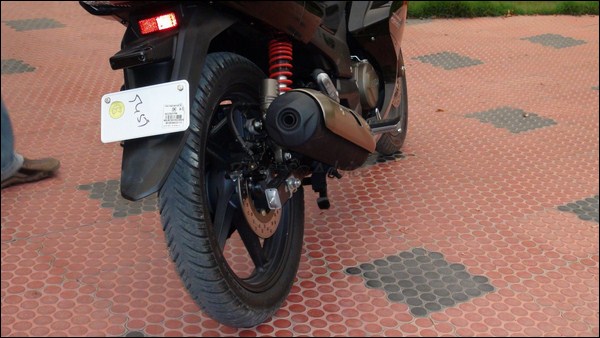 However, the size of the rear tyre could have been widened, thereby offering better road grip.

Hero Honda dealers are very satisfied with the new Karizma ZMR. The General Manager of a showroom in Salem said. “Presently, the demand is so high for this bike that it has become a tough task to match the demand with supply. This is owing to the great design and brand value of this bike. The response for this bike has gone way ahead after the ads that had been put up by Hero Honda during this IPL season (which ended on last Saturday)”. He added, “The supply from the company is good in Tier 1 cities, but when it comes to tier 2 and tier 3 cities, customers are forced to face a waiting period for its delivery”.

If Big means Beautiful for you, this is the bike that is exactly designed for you. The Karizma ZMR is a great performer and a value for money. 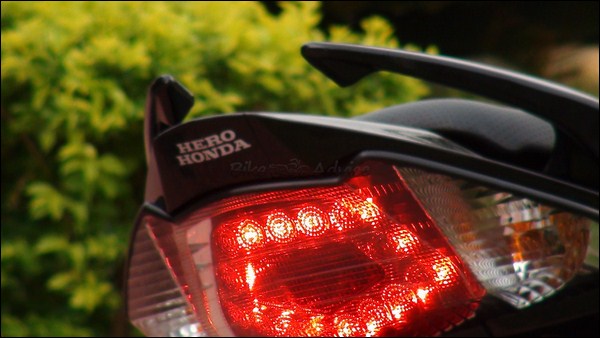 I even tried to pull this bike off the road for a couple of minutes and the power it exhibited was just amazing.

Priced at 1.10 lakh, you get a big macho bike with great capabilities that also offer you a style statement.